Smith drives away on restart to win Trucks race at Kansas 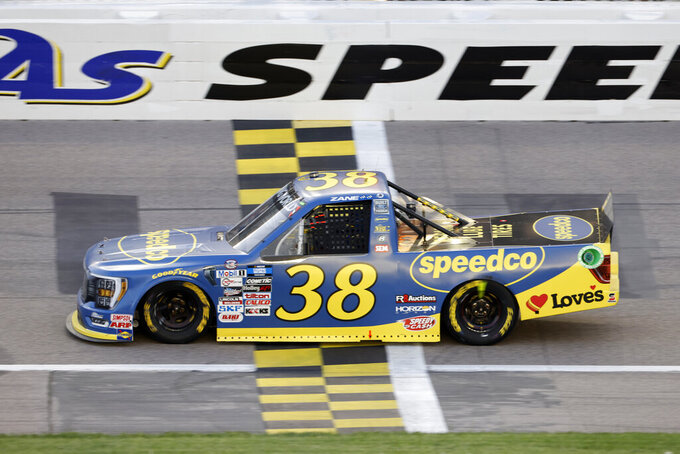 KANSAS CITY, Kan. (AP) — Zane Smith drove away from pole-sitter John Hunter Nemechek and Ty Majeski on a restart with nine laps to go at Kansas Speedway on Saturday night for his third NASCAR Truck Series victory of the season.

The 22-year-old Smith, who moved from GMS Racing to Front Row Motorsports earlier this year, was slicing through lapped traffic with a comfortable cushion on the rest of the field when Dean Thompson crashed in the closing laps.

It didn't matter one bit.

Smith chose the inside lane and launched away from the pack on the restart to add to his season-opening win at Daytona and his victory at Circuit of the Americas. Majeski was second and Grant Enfinger third while Nemechek, the winner last weekend at Darlington, got a terrible jump on the final restart and wound up sixth.

“Just so cool. That was one of my easier ones I've ever had to win,” Smith said, “but that late-race restart scared me a little bit. Good thing I didn't have another one there because I'm stuck in fourth (gear), so sorry about no burnout.”

“We were really close,” he said. “We kept easing on the adjustments all night, getting the balance better on every run. ... We've been really hitting it off this year. It's been a ton of fun.”

Corey Heim, the 19-year-old from Georgia, bounced back from a crash in the ARCA race earlier Saturday to win the opening stage. The surprise winner at Atlanta was never challenged after getting past Nemechek for the race lead.

Heim then spent the second stage chasing Smith, who cruised to his fourth stage win, before his night went awry. Heim's engine began causing problems and he slapped the wall while running sixth in the final stage.

On the move throughout the first two stages was Stewart Friesen, whose trip from the back of the field wasn't nearly as frustrating as his trip to Kansas. Friesen had so many travel woes — he spent the previous night in a New York City airport — that he wasn't due in time to qualify, so Bubba Wallace climbed into the No. 52 for practice and time trials.

Friesen's flight landed about the time that Wallace qualified fifth, but the driver switch sent him to the rear for the start.

Carson Hocevar, another 19-year-old who ran second at Bristol and was runner-up again last week at Darlington, once more found himself in contention for his first win. But when a caution flew with just over 40 laps to go, an uncontrolled tire on pit road resulted in a penalty that sent Hocevar to the rear and dashed his chances.

Friesen wound up 14th while Hocevar finished right behind him in 15th.