Power's play puts Penske back in front for Indianapolis GP 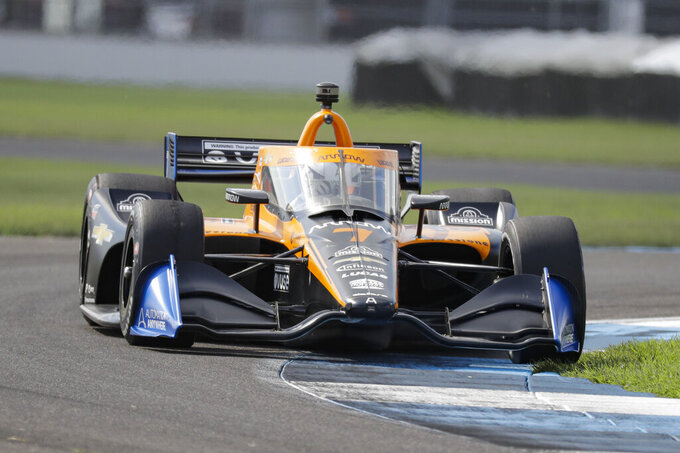 INDIANAPOLIS (AP) — Will Power brought back normalcy to Indianapolis on Friday.

After a two-month race delay and a one-month hiatus between IndyCar's first two races, Power reclaimed his status as the favorite for Saturday's Indianapolis Grand Prix favorite by overtaking Jack Harvey in the final seconds of qualifying with a pole-winning run of 1 minute, 10.1779 seconds on the track's road course.

It took everything Power had to eek it out.

“I left nothing on the table on that lap," Power said. “I knew that Harvey had a pretty good time up there, so I put on my best set (of tires) for the final run and thankfully it was enough."

Barely enough on an unusual — and rare — qualifying day.

Simon Pagenaud, Power's teammate and the defending race winner, didn’t make it past the first round. Five-time series champion Scott Dixon missed out on the final round. And two-time series winner Josef Newgarden, also with Team Penske, didn’t even complete a lap after making the fast six.

Heck, even Tony Kanaan, the IndyCar iron man, was out of the car — ending his record streak of 318 consecutive IndyCar starts.

And with some of his traditional contenders struggling, Power took full advantage by patiently waiting to make one late run for his fourth GP pole. He's won each of the three previous he had the fastest qualifying time.

I think at the end of the day, it was just Will Power doing Will Powery things,” Harvey said after finishing second in 1:10.3653. “Maybe he could have shared one of those (poles) with me.”

The English driver with Meyer Shank Racing spent most of the final round atop the leader board — until Power sped past. Colton Herta qualified third with a time of 1:10.5197.

But nothing looked or felt quite the same as it did when these drivers last competed at the historic Brickyard in May 2019.

Delaying the race, because of the COVID-19 pandemic, forced drivers to turn their first Indy laps with the new windscreens in searing temperatures.

“It’s just harder this year," Power said. “Even if we didn’t have the screens, it would be really difficult because it’s so much hotter. We'll see in the race tomorrow."

Instead of spending a whole month at the famous Brickyard, the schedule revised to include two days of track activity this weekend with a return trip for the Indianapolis 500 slated for mid-August.

The stands were empty, as they have been at most sporting events since the phased-in state reopening began, and IndyCar's biggest stars wound up sharing the road course with NASCAR's Xfinity drivers.

Naturally, they were some bumpy moments.

“Sort of a shame, we just on the red tires, we got a lot of push," Pagenaud said after qualifying 20th. “The car was pushing in the corners and it didn't translate into lap time. We missed out, we missed the balance."

Herta dealt with blistering hands in practice and was the only driver from Andretti Autosport or Chip Ganassi Racing to crack the fast six. Even Dixon had trouble.

"Made a bit of an error in experimentation,” he said after qualifying seventh. “It will definitely make for an interesting race.”

But with Power leading the 26-car field to the starting line, perhaps Saturday will follow a more typical script.

Power and Pagenaud have split each of the first six race wins.

Newgarden is hoping to break up that dynasty though it would give Roger Penske a sixth straight GP win — and his first as the IMS owner.

Penske has the last four IndyCar races here and five of the last six IndyCar-Cup races at Indianapolis including Brad Keslewoksi's Brickyard win in 2018. Keslewoski will try to duplicate that feat Sunday.,

First, though, there's the unprecedented IndyCar-Xfinity doubleheader that presents its own intrigue.

“It was tough man, I got everything I could out of it," Power said. “It will be interesting tomorrow because it’s possible to do the race on two stops."