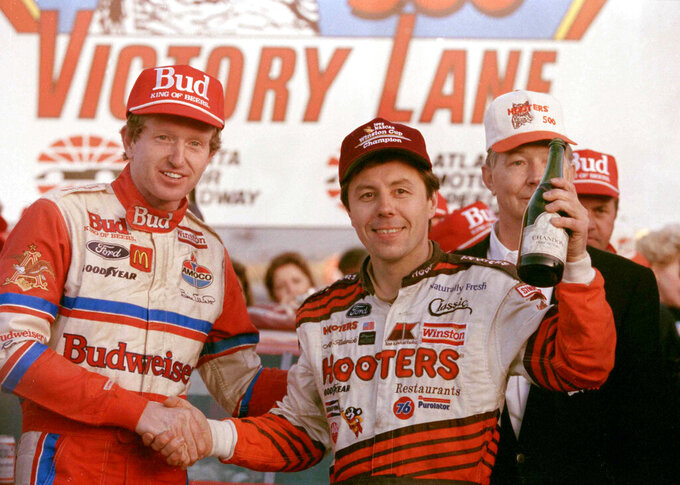 RICHMOND, Va. (AP) — Bubba Wallace says get the shot, like he did.

Brad Keselowski says he hasn't decided yet whether to get vaccinated against COVID-19 while Austin Dillion and reigning NASCAR Cup Series champion Chase Elliott say it's a personal choice and no one else's business, though Dillon's Richard Childress Racing team did host a voluntary vaccination clinic on site for employees and their families.

Throughout motorsports, which has long prided itself on face-to-face access for fans and glad-handing time with sponsors, approaches to stifling the spread of the coronavirus that has cost the sports world billions still vary greatly. In IndyCar, teams are pushing toward 100% vaccination.

But in NASCAR, with a fan base traditionally more conservative in its Southern strongholds, it is the rare driver who touts vaccination.

One of the few is Wallace, driver of the new-this-year 23X1 team co-owned by NBA Hall of Famer Michael Jordan and NASCAR star Denny Hamlin. Like RCR, 23XI had a mass vaccination day at its shop for employees and their families. Wallace also partnered this week with Novant Health to address the hesitancy some have to getting vaccinated; after CNN showed him receiving his jab, the 27-year-old Wallace said he's trying to lead by example.

Wallace is the only Black driver in NASCAR's top series, and the Black community has been especially hard hit by the pandemic, which has claimed more than 561,000 lives in the United States alone.

“I'm not trying to shove it down people's throats," Wallace said Friday. “I'm just saying, `Hey, I'm comfortable taking this route to get us back to a normal capacity in all aspects of life.'”

Wallace's former boss, retired great Richard Petty, filmed a promotion showing him getting vaccinated, but few others have taken such steps.

“I think it’s a personal decision that everyone has a right to, and so, accordingly, I think once it’s open to everyone, those who feel comfortable getting it should certainly get it if that’s what they want to do,” said Keselowski, the 2012 Cup Series champion. “I haven’t made a decision on what I’m going to do.”

His crew chief has. Jeremy Bullins said: “I don’t have it yet, but I do have an appointment scheduled.”

With talk that NASCAR would like to — local governments permitting — begin increasing the number of fans at races, and perhaps allow sponsor access into the garage, it's an easy choice, Bullins said.

“I read this weekend they’re going to start letting fans back in,” he said. “From that regard, I think our sport is not sustainable without fans, and I think the level of access that we’ve always provided is second to none compared to other sports.”

IndyCar is preparing to kick off its season at Barber Motorsports Park in Birmingham, Alabama, this weekend and Mark Miles, president and CEO of Penske Entertainment Corp., said “somewhere around 90% of the team personnel will be vaccinated, and I think that’s going to continue to move up.”

IndyCar also is considering regular COVID-19 testing for participants who choose not to receive the vaccine, Miles said.

NASCAR is also eager to have the full return of fans; the biggest turnouts in the past year have been approximately 30,000 at Bristol (twice) and then 30,000 for the season opener at Daytona.

Chase Briscoe also hasn’t said what he plans to do about vaccination, but noted he hopes race weekends get back to normal. He said that last weekend at the race in Martinsville he “probably signed (autographs) for 30 or 40 fans walking in because they’re all standing there.”