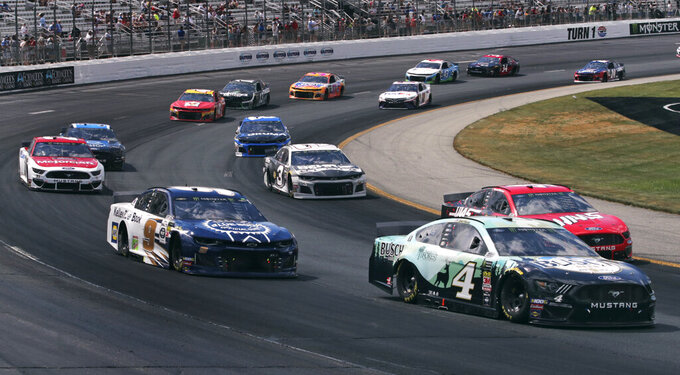 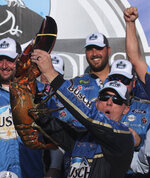 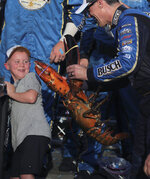 Repeating required another bump, but there was little time for a run before Harvick crossed the finish line 0.210 seconds ahead of Denny Hamlin on Sunday.

"It turned into a wild finish," Harvick said after his first NASCAR Cup Series victory of the season.

Harvick gave Hamlin a late opening when he had trouble navigating a group of cars that were off the lead lap. After nearly catching him on the back stretch, Hamlin made another run through the final two turns but couldn't regain the lead.

"I just told him 'we were leaving on a tow truck or winning the race today,'" said Harvick, who hadn't won since Texas in November.

Driving a backup car after wrecking during a practice lap Friday, Hamlin led 113 laps, but couldn't catch Harvick after pitting on a caution after Kyle Larson blew a tire on the 265th lap.

"I just could not break that barrier," Hamlin said. "I could not get him to make that one little slip to give me the bottom."

The 43-year-old Harvick led the final 41 laps in the No. 4 Stewart-Haas Racing Ford for his second straight victory at the track. He has four victories at the mile oval to tie the record set by Jeff Burton.

Harvick won at New Hampshire last year after a late bump from behind knocked Kyle Busch off the lead. On Sunday, Harvick had a late bump again, but this time it was nudging Hamlin just enough to the side coming out of the final turn.

"I'm like, 'You're not getting under me again.' And he drove to the outside of me, and I waited until he got near me, and I just put a wheel on him," Harvick said.

NASCAR announced Harrison's death during the drivers' meeting before the race Sunday and honored him with a moment of silence. No details were given.

The 37-year-old Harrison was the crew chief for Justin Haley, who finished in 13th Saturday. In Harrison's first season with Kaulig Racing, Haley had two top-five finishes and finished 12 times in the top 10.

Harrison was a veteran crew chief with all three NASCAR national series since 2006. His teams won five Xfinity Series races with drivers Austin Dillon, Paul Menard and Kurt Busch, who were all driving Sunday.

"We all lost a friend last night. We love you Nick Harrison. You were a leader, and a great friend to all," Kurt Busch posted on Twitter. "Nick really helped me rebuild my career when I was at a low point. RIP."

PLAYOFF POSITION: Joey Logano was ninth. He has a three-point lead over Kyle Busch in the point standings. Busch, who won the first stage Sunday after qualifying second, finished eighth.

UP NEXT: At Pocono Raceway on Sunday afternoon.