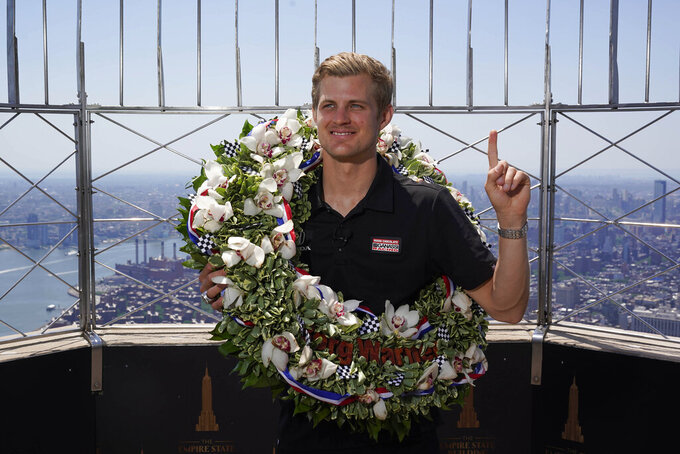 Marcus Ericsson, of Sweden, poses for pictures on the observation desk of the Empire State Building in New York, Tuesday, May 31, 2022. Ericsson won the 106th running of the Indianapolis 500 auto race on Sunday. (AP Photo/Seth Wenig)

The first seven IndyCar races have featured six different winners. The points lead has changed hands six times. There's been a different pole winners, the most since 1961, for each of the first eight events; Alexander Rossi added his name to the list at Road America.

“It says a lot about the series at the moment,” Indianapolis 500 champion Marcus Ericsson said. “There’s so many good drivers, so many good teams. It’s so hard to get it right week after week. Every weekend there’s at least, I would say, like 15 cars that can win that race they have their day.”

Ericsson is second in the standings – three points behind leader Will Power – heading into Sunday’s race at Road America. The permanent road course has featured a different winner in each of its last five IndyCar events.

Power took over the points lead by winning last week at Belle Isle. Ericsson won the Indy 500 a week earlier. Josef Newgarden is the circuit’s only two-time winner this season with victories at Texas and Long Beach. Scott McLaughlin won the opener at St. Petersburg, Pato O’Ward won at Barber and Colton Herta won on the Indianapolis road course.

The list of winners doesn't include Rossi, who has been mired in a 44-race losing streak dating to Road America in 2019. But he won his first pole since 2019 in qualifying and is trying Sunday at Road America to end his drought.

“It's motivating, obviously,” Rossi said. “You don't want to ever go through an experience like this. We haven't finished the job yet. We need to go win. We've accomplished half the goal.”

IndyCar has never had a Road America winner come from farther back than 13th, done by Alex Tagliani in 2004. Since the IndyCar series returned to Road America in 2016, all the winners have started ninth or better.

“It's a long track," said Newgarden, who will start second. “It's a lot of ground to make up. We get pretty spread out. So when you start in the back, it puts you on even more of a back foot here versus a smaller track.”

That's bad news for Power, who will start 15th. But then again, Power won from 16th last week in Detroit to reclaim the points lead.

“It’s great for IndyCar, for women in motorsports, for everyone basically,” Calderon said. “The more, the better. We are making steps forward.”

Felix Rosenqvist won one of the races in Road America’s 2020 doubleheader but missed last year's race after he was injured a week earlier in a crash at Detroit.

Rosenqvist is back now and hoping to replicate his 2020 success — which could help his quest to keep his job. The Swede is in a contract year with Arrow McLaren SP and paddock speculation has placed a number of different drivers in the seat, with Rosenqvist rarely mentioned as a candidate.

But he's running better of late: Rosenqvist was sixth on the road course at Indianapolis, fourth in the Indianapolis 500 and 10th in Detroit.

“We think we made some good improvements for this track specifically, which we knew we had to make,” Rosenqvist said. “Hopefully we can get back-to-back-ish.”

COMING BACK FROM INJURY

Callum Illott and Kyle Kirkwood are both racing this weekend with injured hands.

Illott missed Detroit with a broken bone in right hand suffered in a crash at Indy. Kirkwood hurt his right wrist last week when he crashed into a tire barrier at Belle Isle.

“We looked quite extensively at my hand, and the risk of further damage is a lot lower,” Illott said. “It’s still a factor, but the track surface in Road America is a lot less bumpy than Detroit.”

Illott went off course and hit a tire barrier in the second segment of qualifying Saturday, bringing out a red flag.

This will be the last IndyCar race at Road America before it gets repaved, though the course has a full 2022 schedule that includes a NASCAR Cup Series stop July 3.

It will mark the first time Road America has been repaved since between the 1994 and 1995 seasons. Rossi said he welcomes the change because it should produce better times.

“For us, as drivers, all we want to do is go faster,” Rossi said. “I wish we could repave it right now and see what it’s going to be like.”