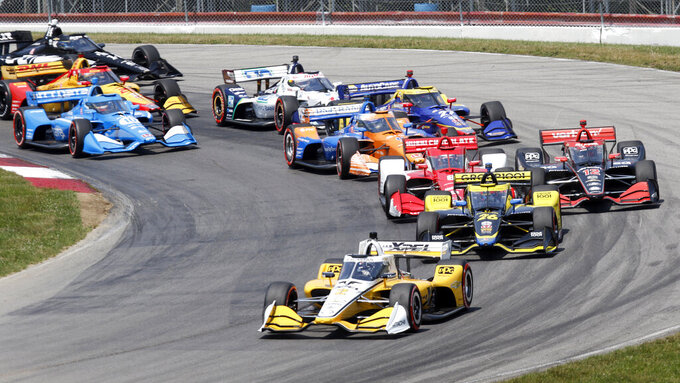 Josef Newgarden leads the field after taking the green flag at the start of an IndyCar race at Mid-Ohio Sports Car Course in Lexington, Ohio, Sunday, July 4, 2021. Newgarden snapped his streak of late race misfortunes Sunday to win for the first time this season, earning the first IndyCar victory of the year for Team Penske on the same weekend the storied organization celebrated the 50th anniversary of its first win. (AP Photo/Tom E. Puskar)

IndyCar announced an extension with NBC Sports on Tuesday that guarantees a majority of its races will be on the main network broadcast rather than cable, including a series-high 13 events on the flagship channel next season.

Still, the migration toward streaming will hit full speed next season as NBC Sports plans to exclusively stream two IndyCar races on Peacock. The rest of the IndyCar schedule, which is expected to be 17 races but has not yet been released, will air on USA Network.

Jon Miller, president of NBC Sports programming, said the network never wavered in its desire to extend its relationship with IndyCar because “we think its some of the most competitive racing out there. We think it is, quite honestly, really, really good racing.”

He cited this season's move to IndyCar for seven-time NASCAR champion Jimmie Johnson and former Formula One driver Romain Grosjean as audience-builders, as well as an emerging crop of new stars. Current IndyCar points leader Alex Palou is one of four first-time winners this season, and the 24-year-old Spaniard is actually the oldest winner in an exciting, young group.

Miller told The Associated Press the extension was a three-year deal and that NBC Sports is proud of the growth its seen since it acquired the entire IndyCar schedule in 2019. NBC Sports previously only held the rights to races on cable, while ABC/ESPN held the broadcast rights.

“We saw what happens when you have the entire property exclusively is you can marshal all the different assets inside NBC Universal to promote it and showcase it,” Miller said.

Although IndyCar passed on that deal, Miles said he believes streaming is a critical part of the series' growth.

“We thought it was very important for Peacock to have a prominent role in the programming; we need to develop an audience that wants to take in their sports on streaming platforms,” Miles told AP. “That platform is growing quickly and this is a multi-year agreement and we don't want to be only beginning to understand streaming and starting to build a streaming audience three or four years from now.”

The newsy part of the deal is the 13 races on NBC and a guarantee that the bulk of the schedule will air on broadcast for the length of the contract. But the finer details include a major online presence as all races on NBC and USA will be simultaneously streamed on Peacock.

Peacock is already the home for IndyCar qualifying and practices sessions, Indy Lights races, and full-event replays. That will continue in the new deal.

NBC Sports started its relationship with IndyCar in 2009 when the channel was Versus but split the schedule with another broadcast partner for the first decade. When it acquired the entire package, the deal came with the crown jewel Indianapolis 500, which had aired on ABC since 1965 in the second-longest deal between an individual sporting event and a network.

The 105th running in May on NBC was the most-watched Indy 500 since 2016. The network said it averaged 5.581 million viewers an hour during Helio Castroneves' record-tying fourth victory, and through nine races NBC Sports is off to its most-watched season of IndyCar.

Part of the ratings boost has come from a record nine races broadcast on NBC this season, as well as strategic planning in which the IndyCar race has aired immediately before coverage switches to NASCAR. NBC Sports shares half of NASCAR's television schedule with Fox Sports; the network also holds the rights to the IMSA sports car series.

Miller told AP it was too soon to discuss any talks with NASCAR on extending its deal, which expires at the end of the 2024 season. But he agreed that stacking motorsports programming has helped all series.

“There is a motorsports audience and it never makes sense to try to compete with yourself, you don't want to have the events going on at the same time,” Miller said. “If you can use one to promote the other, I think it's good for both sports. Racing fans are racing fans, and if we can convert NASCAR fans into IndyCar fans, or IndyCar fans to NASCAR fans, so be it.

“They're two different types of racing, they're both great products, we're very lucky to be in business with both of them and so we always look to maximize that opportunity.”

NBC Sports had the U.S. rights to Formula One when F1 began the popular Netflix behind-the-scenes series “Drive To Survive,” and has seen how the programming has helped build a new domestic audience.

Miles has said often IndyCar wants to create similar programming and Miller didn't rule out a collaboration on such a project.