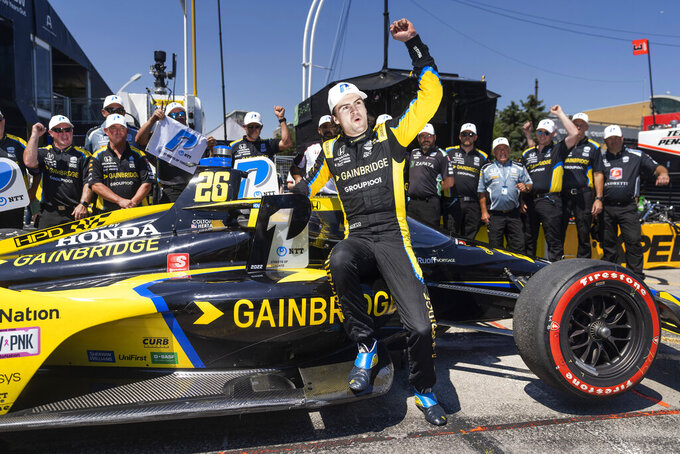 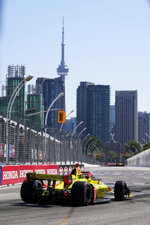 It's Herta's ninth career pole and his first since April's race in Long Beach, California.

“It's always nice when you get to drive a race car that you know can get there, and yeah, we put it all together," Herta said. "The car's amazing, the team's amazing.”

Herta's been pretty good, too.

He's won four races since the start of 2021 and seven times since joining the series full-time in 2019 — all on road courses. And earlier this week, Herta spent two days in Portugal testing cars for McLaren's Formula One team.

But once he hopped back in an IndyCar car this weekend, it all felt and looked natural to Herta.

“I was a little bit worried about maybe taking a session to get back into it,” he said. “But as soon as I got in the car, the seating position and everything is so different that it was almost kind of like a light switch just flicked in my head that this was the IndyCar. It took maybe one or two laps. The actual driving style isn’t incredibly different, so it was pretty seamless to kind of go back and forth.”

It certainly appeared so.

Dixon settled for second at 59.3592, falling just short of winning his first non-Indianapolis 500 pole since 2016. And all it took was one slight miscue.

“Probably over-attacked on the last lap there, lost quite a bit of time in (turn) six,” Dixon said. “There’s always things you can improve. Congrats to Colton, it was a great lap. Looking forward to starting close up to the front and hopefully have a clean day.”

The New Zealand driver for Chip Ganassi Racing needs one more win to tie Mario Andretti (52) for No. 2 on the series' career list. A win also would help Dixon move back into contention for a potential record-tying seventh series crown, matching A.J. Foyt.

Two-time series winner Josef Newgarden will start third after going 59.5257 despite brushing the wall in the sixth turn before parking the No. 2 Chevrolet. Team Penske also scrambled to replace Newgarden's engine between the morning practice session and the start of qualifying.

Newgarden is third in points, trailing Marcus Ericsson, who will start ninth.

Rookie David Malukas had a chance to become the 10th driver in 10 races to win the pole. Instead, he will start a career-best fifth in the first race held at Toronto since 2019.

Herta will be joined near the front of the 25-car field by Andretti Autosport teammate Alexander Rossi. The 2016 Indianapolis 500 winner qualified fourth, a run that may finally end the public spat between Rossi and teammate Romain Grosjean since the two crashed into one another at Mid-Ohio.

Team owner Michael Andretti held a meeting with all of his drivers following the race, but the dispute continued to simmer through last weekend when the series was idle.

“Last weekend was a bit of a nightmare for us as an organization, pretty embarrassing,” Herta said. “But good to kind of get it behind us. Nice that everybody’s kind of made up and no longer are in that mindset. It’s a good way to kind of regroup.”

Dixon's strong performance also may help his own team move beyond another distraction, Tuesday's dual announcements from Chip Ganassi Racing and McLaren that defending series champion Alex Palou would compete with them in 2023.

The first Spaniard to win the series title insisted he would not let the issue impact his results this weekend. But he crashed in the morning practice and qualified 22nd after his stopped car brought out a red flag in qualifying.

The start of Saturday morning's practice was delayed about 30 minutes at the start because of a crash in the previously scheduled event. Palou and Newgarden didn't get much work in, either.

Palou damaged the left side of his No. 10 Honda when he hit the concrete wall in the third turn and again in the fourth turn after just seven laps. He's racing for the first time in Toronto.

One lap into Newgarden's practice, the oil pressure alarm went off. A few minutes later, the No. 2 Chevrolet was towed to the garage. Newgarden has won twice in Toronto.

They weren't the only teams scrambling to get cars ready for qualifying. Two-time Indy 500 champ Takuma Sato, of Japan, and Grosjean, of France, also crashed. Only Newgarden made the pole shooout.

Canadian driver Devlin DeFrancesco, a rookie, will start a career-best 12th on his home track.