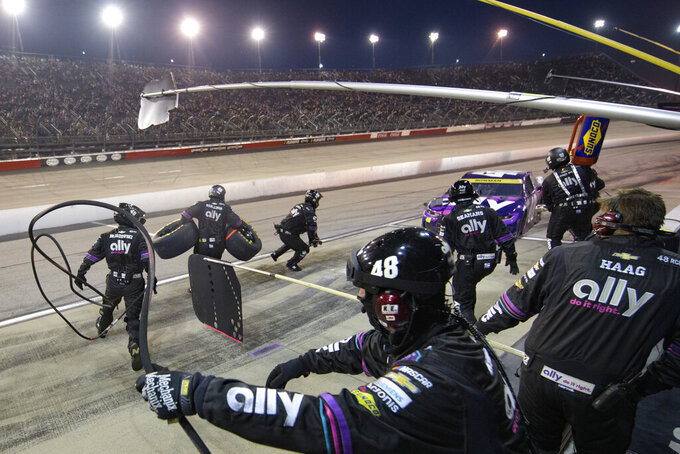 DARLINGTON, S.C. (AP) — Kyle Busch slammed into the wall and wiped out several orange cones on his way to the garage. Chase Elliott told his crew chief simply, “It's killed,” after he was crunched against the wall at Darlington Raceway.

It was a layout certainly “Too Tough To Tame” for some of the top contenders in the NASCAR Cup Series playoff opener on Sunday night.

The last two series champions, Busch in 2019 and Elliott last year, were out of their cars and planning for next week in Richmond long before Denny Hamlin took the checkered flag.

Busch raced closely with Austin Dillon, got loose and tagged the outside wall in turn two before hitting the inside wall. He jumped in his car and drove straight off the track, scattering several orange cones in his getaway.

Then Busch turned his frustration on his No. 18 team. “It shouldn't be that” bad, he said in his profanity-laced comments. “I don't know what our problem was.”

Elliott had similar issues later when he was on the wrong side of a three-wide run and was pushed against the wall. He came away with a flat tire and brake problems.

“It's killed,” he radioed to crew chief Alan Gustafson. “There's no way we can go on.” Elliott finished 31st.

“It seemed like a lot of cars who are in the chase had issues,” car owner Joe Gibbs said.

Elliott's Hendrick Motorsports teammate William Byron ran into another teammate, Alex Bowman, early in the race. Later, Byron couldn't escape the wall, and his car briefly caught fire before he took it into the garage. The eighth-seeded Byron ended in 34th place.

And Daytona 500 champion Michael McDowell, excited for a playoff run, saw his race end much earlier than he imagined after hitting the wall just 30 laps in.

“It's not the way we wanted to start the playoffs,” McDowell said. “But we know what we've got to do now.”

They weren't the only ones of the top 16 drivers who cost themselves an opportunity at Darlington. In a bit of unlucky timing, past champion Brad Keselowski came in for a green-flag pit stop a couple of laps before a caution allowed everyone in to refuel and install fresher, faster tires that are critical to success at Darlington.

Hamlin's second-seeded JGR teammate, Martin Truex Jr., was poised to come out of the pits in front with just 36 laps left when he was ticketed for going too fast into his stall. He was moved to the back of the pack just as he was in reach of adding the Southern 500 to his Darlington win this past May.

“We were going to be the leader, weren't we?” Truex radioed to his team. When told they were, Truex said, “I'm sorry.”

Bowman, the sixth seed, ended 26th at Darlington while Ryan Blaney, tied with Truex as the second seed and winner of the past two races coming in, was hit with a pit penalty for an uncontrolled tire that dropped him into 22nd.

At the moment, it's Hamlin in control as the first driver advancing to the round of 12 after his fourth career win at Darlington. Kyle Larson, the championship favorite and top playoff seed, finished second behind Hamlin, while Truex held on for fourth.

One mark of a champion could be overcoming issues to stay alive in the playoff's elimination format. Those drivers on the outside at the moment are Bowman in 13th, followed by Busch, Byron and McDowell.

They'll have to gird themselves to try for the win either next week at Richmond or Bristol that would vault them into the next round. If not, early headaches might cost them a shot at a NASCAR championship.

Bowman said that so many other playoff drivers had problems doesn't make him feel much better about his own performance.

“Pretty frustrated with myself to grab the wall that early,” he said. “But that's Darlington and that's playoff racing.”