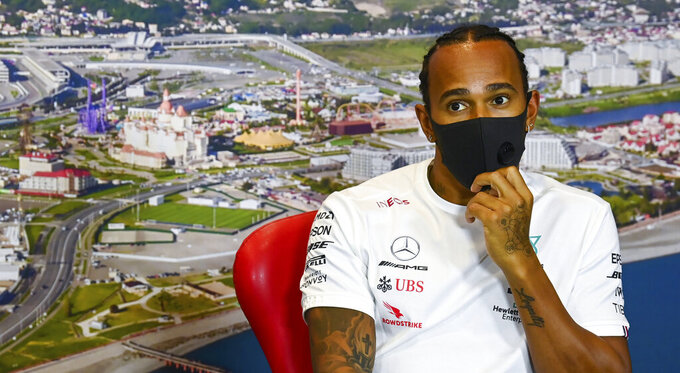 SOCHI, Russia (AP) — Lewis Hamilton has set many Formula One records over the years, but few as significant as the one he can match Sunday at the Russian Grand Prix.

Victory for Hamilton at the Sochi Olympic Park would see him draw level with Michael Schumacher on 91 career wins, more than any other driver in the 70-year history of F1.

It would also further increase Hamilton's commanding 55-point lead over teammate Valtteri Bottas in the championship standings, putting him closer to a seventh world championship, matching another Schumacher record.

History is on Hamilton's side. He's won four of the six Russian races so far and all six were won by Mercedes drivers. His closest challenger is likely to be Bottas, who beat Hamilton in the 2017 edition of the Russian Grand Prix to claim what was his first career win.

Between them, Hamilton and Bottas have taken pole position at every race this year. That's less of an advantage in Sochi because the long run to the first corner allows cars coming from behind to overtake using the slipstream.

Hamilton is not only targeting wins on the track. He also revealed Thursday the members of a commission he set up in June to find ways to make racing more diverse, including figures from engineering, education and politics. Hamilton is co-chair.

“In F1, our teams are much bigger than the athletes that front them, but representation is insufficient across every skill set — from the garage to the engineers in the factories and design departments. Change isn’t coming quickly enough, and we need to know why," Hamilton said in a statement.

There will be more spectators in the stands than for any other race in the pandemic-hit 2020 season. Organizers say the race weekend is sold out but haven't given final ticket sales figures.

Race promoter Alexei Titov previously told Russian state TV that the stands would be at 50 percent of their capacity, which equates to around 30,000 spectators.

That's far more than the previous season high of 3,000 fans for the last race, the Tuscan Grand Prix at the Mugello circuit.

Unlike at the last two races in Italy, there will be a full entertainment program on offer for fans, with concerts featuring some of Russia's most popular musicians.

Russian organizers say they're taking precautions to keep fans safe and will have medical staff posted at checkpoints around the venue, and that spectators will have their temperature measured on entry.

It's hard to believe that Max Verstappen still looked like an outside title challenger only a few weeks ago. Since then his season has gone up in smoke.

An overheating engine forced the Dutch driver out of the race at Monza and then a similar problem struck just before the start of the following race at Mugello. Verstappen was far slower off the line than the cars around him and was struck by Kimi Raikkonen's Alfa Romeo.

That leaves Verstappen a full 80 points off Hamilton in the standings, though he could rebound by trying to make up the 25-point gap to Bottas in second place.