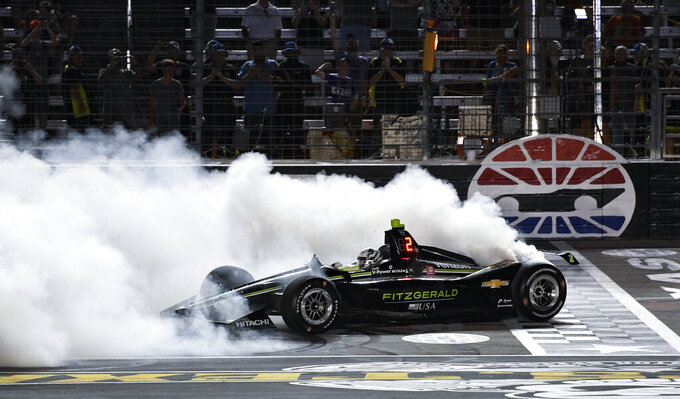 FILE - In this June 8, 2019, file photo, Josef Newgarden does a burnout after winning the IndyCar auto race at Texas Motor Speedway in Fort Worth, Texas. IndyCar opens its pandemic-delayed season with an all-in-one-day show Saturday on the fast high-banked 1 ½-mile oval at Texas Motor Speedway, more than eight months after the 2019 finale. (AP Photo/Larry Papke, File)

FORT WORTH, Texas (AP) — Things are starting to feel a little more normal for Ed Carpenter with IndyCar finally about to start its season, though the timing still has him a bit out of sorts. The only owner-driver in the series surely isn’t alone feeling that way.

“One of the weirdest things, I’ve been doing this so long, knowing the (Indianapolis) 500 is in August, it still feels like it’s going to be in May even though we’re in June,” Carpenter said. “It feels a whole lot more like March now that we’re getting started.”

IndyCar opens its season delayed by the pandemic with an all-in-one-day show Saturday on the fast, high-banked 1 ½-mile oval at Texas Motor Speedway, more than eight months after the 2019 finale. The 24 drivers will practice, qualify and race for the first time with new protective windscreens on the cars, all in a span of 9-10 hours in front of empty stands.

“It’s going from a complete standstill to one of the fastest tracks on our schedule, so hopefully everybody has got their wits about them,” Ryan Hunter-Reay said. “It’s definitely an interesting scenario to go straight to Texas.”

Texas was scheduled again to be the midpoint race of the season, the ninth of 17, with the Indianapolis 500 among the eight races before that and then eight more afterward. Only Indianapolis Motor Speedway has hosted IndyCar races longer than TMS, which has had races each year since opening in 1997, including the season finales from 1999-2004.

Now Texas is the opener, with 200 laps instead of the usual 248, while the Indy 500 will be run Aug. 23 and there are three doubleheader weekends. Texas, Iowa and Laguna Seca in Monterrey, California, are the only tracks that kept their original dates, though second races were added to those other two venues.

IndyCar gets started nearly three months after the teams were already in St. Petersburg, Florida, before the scheduled March 15 race was called off and the season put on hold because of the escalating pandemic. St. Pete will now host the season finale Oct. 25.

NASCAR resumed its season with five Cup Series races in a 15-day span, events without spectators that drew solid television ratings. This weekend, NBC will broadcast an IndyCar race in prime time for the first time, providing an opportunity for some first-time viewers of the open-wheel series at the site of some of its fastest races and closest finishes.

“It’s like watching jet fighters in a gymnasium," said defending IndyCar champion Josef Newgarden, who gave Team Penske another win at Texas last June. “Texas is one of these places where you get these really intense battles with these jet fighter-looking cars. ... It’s just a very fun, intense battle, which turns into a bit like a dogfight.”

James Hinchcliffe will be part of the season opener and Tony Kanaan unexpectedly gets to extend his record streak of consecutive starts.

Hinchcliffe put together a three-race deal with Andretti Autosport that includes the Indianapolis 500 after he abruptly lost his ride with Arrow McLaren last year. He landed enough sponsorship from Genesys, the title sponsor for Saturday's race.

Kanaan is closing out his IndyCar career with the “TK Farewell Tour," racing at oval tracks and the Indianapolis 500. He has started 317 consecutive races since June 2001, and that streak would have ended had the season started as planned on the streets of St. Pete.

“Obviously, I was ready for that (to end) in March," Kanaan said. “While you’re doing it, you don’t realize how big of a deal it is. Now I do value it more because it comes to an end."

Five-time IndyCar champion Scott Dixon is second on the career list with 258 consecutive starts, ahead of Marco Andretti's 234.

Conor Daly will have #LiveLikeChris on his helmet to honor his friend, Chris Beaty. The Indianapolis native and former Indiana University offensive linemen was one of two people fatally shot in downtown Indianapolis last weekend during violence that followed protests over the death of George Floyd. A memorial scholarship fund has been created in Beaty’s name.

“Chris was a pretty close friend of mine. Obviously what’s going on now is just tough to see no matter who you are,” Daly said. “I just wanted to say something because just how good of a person he was. I didn’t want to dive in to anything and create any big story about it or anything. I just felt like he deserved some words. Obviously he was out there trying to help protect some people who were getting robbed.”