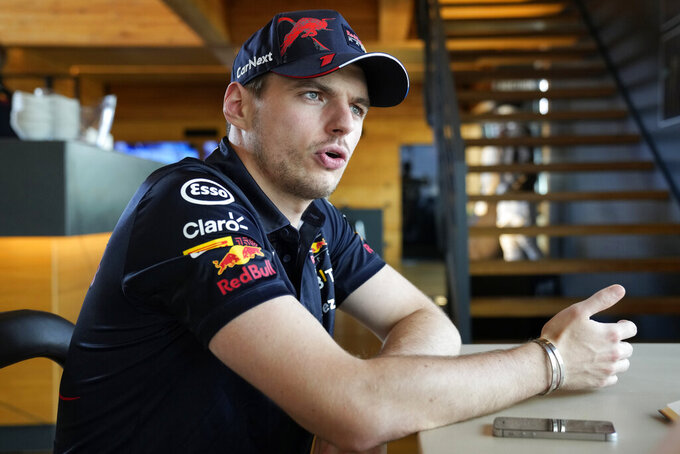 Red Bull driver Max Verstappen of the Netherlands talks to a reporter during an interview with the Associated Press at the Hungaroring racetrack in Mogyorod, near Budapest, Hungary, Thursday, July 28, 2022. The Hungarian Formula One Grand Prix will be held on Sunday. (AP Photo/Darko Bandic)

Verstappen called on F1 and race promoters to implement stronger deterrents to the unruliness in the grandstands.

But when asked if Verstappen could directly calm fans himself, he pushed responsibility onto F1 and called for heightened security.

“I think that also needs to be up to the F1 organization, because they are the ones hosting and working together with the promoter to allow people in," Verstappen told AP inside Red Bull's motorhome at the Hungarian Grand Prix.

Verstappen believes the poor behavior of late is a deeper societal problem.

“You can put a lot of things in place, but at the end of the day it all comes down to education from a younger age: where you grew up, where you went to school," Verstappen said. "That’s where it also already starts, because I don’t think these people got motivated by what we’re doing (in F1) to do these kind of things.

“This is something which has started from a younger age, and this is what they think is fine."

He said banning fans from attending future races is "a strong penalty and I fully agree with that. But will you fully change that person? Probably not.”

Verstappen drew a parallel with bad behavior at F1 races to rowdy soccer fans, and said social media platforms should do “a lot more” to stem online abuse.

“It’s the same in football where people get stadium bans, that doesn’t mean that someone in five years' time won’t do it again," said Verstappen said. “They might risk a stadium ban, (because) some people just don’t think, or just do what they like.”

There is a month-long summer break after the Hungarian Grand Prix before a doubleheader in Belgium and the Netherlands. Those two races, like Austria, will be packed with legions of orange-shirted Verstappen fans dubbed “The Orange Army.”

Verstappen was asked earlier Thursday if he was concerned it is his supporters misbehaving, but he doesn't think the Orange Army was responsible for all the issues in Austria.

“I think in general they all behave quite well, just a few individuals didn’t," he said.

Verstappen, winner of seven of the first 12 races this season, has a 63-point lead over Charles Leclerc of Ferrari headed into Sunday's race. The 24-year-old has tallied 27 career victories, but with a decade or more of racing potentially in his future, he could be eyeing Lewis Hamilton's mark of 103 victories and the record seven championships shared by Hamilton and Michael Schumacher.

“You need a bit of luck, to be at the right team at the right time for a long time to be incredibly successful," he said. “Of course (Hamilton's) an amazing driver, arguably one of the best ever. But you need to have the team to be that dominant.”

Verstappen's dramatic title win last year, where he passed Hamilton on the last lap, increased his huge popularity at home. But it didn't change how he approaches his craft, which he learned from his father, former F1 driver Jos Verstappen.

“It’s great to have that support, but I know I’ll try to do my best anyway. That’s how I grew up, that’s how my dad always worked with me," he said. “You have to look at yourself after the race weekend: ‘Did I extract everything I could out of it?’

"It doesn’t matter if you have millions of followers or not, you have to look at yourself first. They don’t put any extra pressure on me to perform.”