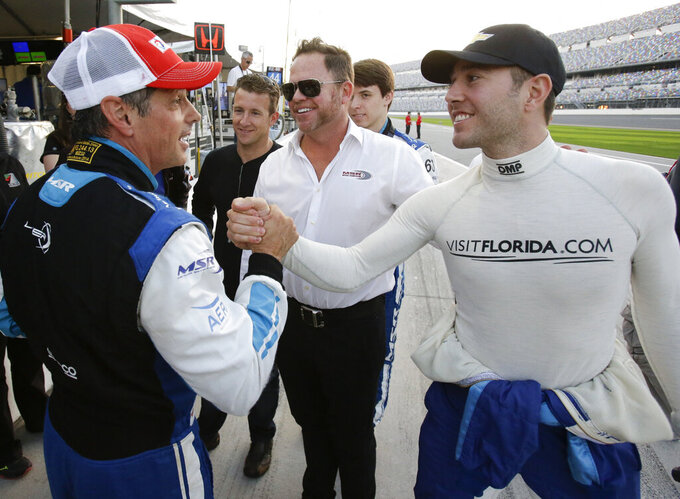 FILE - Oswaldo Negri, Jr., left, of Brazil, is congratulated by driver Michael Valiante, right, after winning the pole position for the IMSA 24-hour auto race as co-driver AJ Allmendinger, second from left, car owner Michael Shank, center, and co-driver Matt McMurry, second from right, celebrate on pit road at Daytona International Speedway in Daytona Beach, Fla., in this Thursday, Jan. 22, 2015, file photo. It took Michael Shank years to break into IndyCar even as the small-time team owner did everything the right way. The long winding road finally crossed the finish line for the biggest win in team history, an improbable Indianapolis 500 victory that gave Shank the validation he's sought for so long. (AP Photo/John Raoux, File)

INDIANAPOLIS (AP) — Michael Shank was so determined to expand his racing operation into IndyCar that he went ahead and bought a car for the 2012 season. But then he couldn't get an engine or even a call back from the series as he desperately tried to put together a team.

Shank eventually had to sell the car because it was useless without an engine supplier, and it took another five years to get a car with his name associated with it into the Indianapolis 500.

The steps he's taken since have been slow and deliberate and the payoff was bigger than anything he could have dreamed. Meyer Shank Racing won its first ever IndyCar race last weekend, 10 years after Shank first tried to launch the team.

It just happened to be the Indianapolis 500.

“I grew up in Columbus, Ohio, three hours from here,” Shank said. “We used to get the Indianapolis Star for the month, my dad and I. We would listen about Unsers, Andrettis, Rahals and just dream. The minute I got out of high school, (I) started driving race cars, trying to find a way to get to this place, and how to win it.”

Helio Castroneves delivered the victory — it was the record-tying fourth Indy 500 win for the Brazilian — in a part-time ride for the team. It was only during last year's pandemic-plagued season that Shank finally had the manpower and resources to run Jack Harvey for a full IndyCar schedule and this year the team had some flexibility to go even bigger.

Jim Meyer, an Indianapolis native, diehard Indy 500 fan and recently retired CEO of SiriusXM Radio, had bought an interest in Shank's team and mapped out a plan at Big Woods restaurant on Main Street in Speedway across from the track. MSR is a customer of Andretti Technologies — it receives technical support, Shank explained, but is absolutely independent and not an extension of the Andretti organization — and Harvey had been making notable on-track progress.

To take the next steps, though, Shank and Meyer felt the team needed to function as two cars at Indianapolis and Castroneves was available. They signed the 46-year-old to a six-race deal with Indy as the first event.

“I can tell you we believed from the very beginning Helio could get a fourth,” Meyer said. “I will also tell you until I got directly involved, after attending the event for 37 straight years, I failed to grasp how hard it is to win this race, just how many things have to go right, how hard you work to get everything prepared.”

Shank since 2004 has run a successful IMSA sports car program and in 2012 celebrated the top prize in American sports car competition with a Rolex 24 at Daytona victory. The team this year became an Acura factory-backed program that will be eligible to compete in the 24 Hours of Le Mans in 2023.

But nothing he'd accomplished to date compared to the feeling of Castroneves crossing the finish line to give a little team an improbable Indy 500 victory. Shank hurdled the speedway walls to get to Castroneves and join the fence-climbing celebration, hoping the entire time he wouldn't fall.

By the time he'd made it to post-race interviews, he'd already received a congratulatory call from Jim France, chairman of both IMSA and NASCAR. It was a far cry from 10 years ago when he couldn't even get an engine.

“For me it’s about respect. I fight for it. I have to prove it all the time,” Shank said. "I feel like we have to prove ourselves all the time. I’m hoping that this is the start of just a continued solid program.

“I don’t want to have a six-car team. I want to do two at some point at a high level and I’m good, take care of our sponsors and partners really well. I hope this result you’re asking me about lands me at that.”