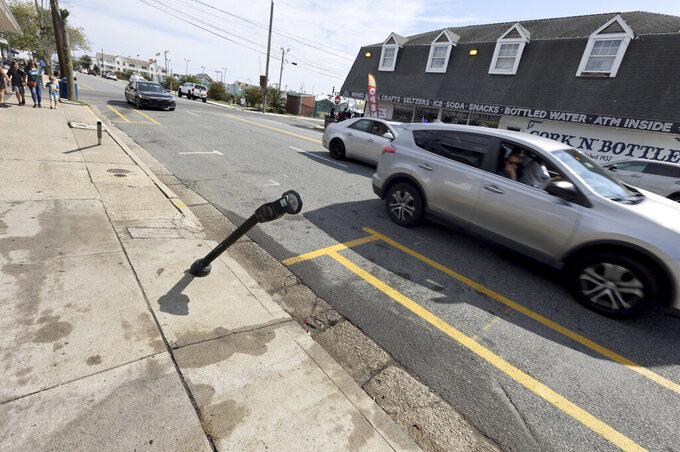 Bent parking meters are seen in front of Bagel Time Cafe in Wildwood, N.J., where an accident occurred the night before, Sunday, Sept. 25, 2022. At least two people were killed Saturday night during a pop-up car rally. (Tim Hawk/NJ Advance Media via AP)

WILDWOOD, N.J. (AP) — A pop-up car rally over the weekend in southern New Jersey led to multiple crashes and the deaths of at least two people riding in a golf cart, officials say.

Wildwood Mayor Pete Byron told NJ Advance Media on Sunday that there were a series of car crashes related to the “unsanctioned” car meet-up event, NJ.com reported. Byron said the two victims “were in a golf cart" but weren't believed to be taking part in the event. The mayor didn't have additional information on the identities of those killed or the nature of the crash.

WCAU-TV reported damage to storefronts and knocked-over traffic meters, seen Sunday morning during cleanup efforts, and said Cape May prosecutors reported one person was in custody in connection with a fatal crash.

Officials had earlier issued warnings about what they called an unsanctioned car rally separate from the Fall Classic Car Show taking place in Wildwood. Participants say the event gives enthusiasts a chance to gather and check out cars, but officials in other areas such as Ocean City, Maryland, have reported problems stemming from the event in previous years.

NJ Advance Media reported three damaged vehicles at the scene of one accident where a car struck a building.

“The cars were outrageous, speeding up and down the streets, the noise was unbelievable,” Angel Fioravanti told the station. “It was scary because I saw people trying to walk off the sidewalk onto the street, and cars were … weaving in and out of the traffic, revving their engines, the noise was atrocious. It really was.”

The Wildwood Board of Commissioners said in a social media post that the mayor had sought additional support from the governor, and state police and other police departments from as far away as Atlantic City were responding.

“Every available police officer and fire patrol was called in, and despite being grossly outmanned, are doing a great job as dispatch works extremely hard to keep up with the calls," the board said, asking people to stay indoors.

Hundreds also showed up at a Middle Township parking lot Friday night, Mayor Tim Donahue said in a statement, NJ.com reported. “There is much to still be learned about the reckless chaos that has descended about our streets this weekend,” he said, vowing “a thorough investigation" and criminal charges.

“We pray for the families of those who were senselessly killed and maimed in the chaos overnight in Wildwood," he said. “The scenes are horrifying.”

Wildwood and North Wildwood police earlier vowed to have extra personnel on duty in light of reports of multiple “pop-up meets" over the weekend. “We hope everyone has a good time at the Fall Classic Car Show in Wildwood and the Irish Fall Festival here but we will not tolerate the nonsense," North Wildwood Police Chief John Stevenson said.