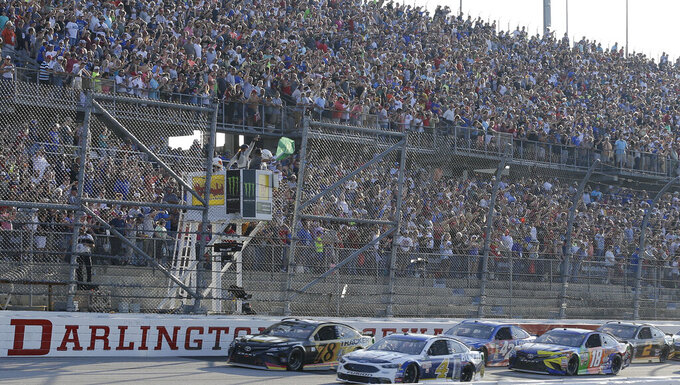 FILE - In this Sept. 3, 2017, file photo, Kevin Harvick (4) leads the field past the green flag at the start of a NASCAR Monster Cup auto race at Darlington Raceway in Darlington, S.C. Faced with many of its teams falling into financial ruin or going racing, NASCAR is throwing the green flag on a plan it believes allows the series to safely resume the season. (AP Photo/Terry Renna, File)

CHARLOTTE, N.C. (AP) — NASCAR's season started with the Secret Service doing a security check on the firesuit-clad pole-sitter for the Daytona 500 and thousands of fans waiting hours in line to pass through a metal detector.

When the season resumes on Sunday some 13 weeks later, drivers will have their temperatures taken as they enter Darlington Raceway in South Carolina and they will be wearing masks as they leave their isolated motorhomes and make their way to their cars. There will be no fans allowed inside.

Faced with many of its teams falling into financial ruin, NASCAR is waving the green flag on a plan it believes allows the series to safely return to racing. Only essential personnel will be permitted into the infield with strict guidelines on social distancing, access and protective clothing.

There will be no one to boo reigning series champion Kyle Busch, no pre-race concert, no pomp and probably no flyover.

The seven races so far announced in May are at Darlington and Charlotte Motor Speedway, tracks within driving distance from teams' North Carolina base. Four are in the elite Cup Series and the other three are lower-tier Xfinity and Truck Series races.

NASCAR hasn't raced since March 8 so Wednesday night events at Darlington and Charlotte are the only way to cram in some of the missed events.

These races will be nothing close to the weekly traveling circus NASCAR typically stages and participants will be figuring out a new normal when they pull up to the gate at Darlington.

Much has changed since Joey Logano scored his second victory of the season — which has so far consisted of just four Cup races — at Phoenix in March. Kevin Harvick is still the points leader and Hamlin, Logano and Alex Bowman are locked into the playoffs as race winners.

Ryan Newman will be back in the field Sunday after his horrific crash on the last lap of the Daytona 500. He suffered a head injury that took him out of his Roush Fenway Racing Ford, but the long pause in the season gave him enough time to heal and receive medical clearance to race again.

Matt Kenseth has come out of retirement to drive for Chip Ganassi Racing, which fired Kyle Larson during the shutdown for using a racial slur during an online race. NASCAR is not running any practices or qualifying before Sunday's race, so Kenseth will be cold when he climbs into a stock car for the first time since the 2018 season finale. At 48, he will be the oldest driver in the field.

NASCAR had hoped to announce a revamped 2021 schedule in April that included midweek races, more short tracks and road courses, and other efforts to shake things up. Those plans have been delayed as completing the 2020 jigsaw puzzle is now the priority; NASCAR said last week it won't race this year as scheduled at Chicagoland Speedway or on the road course in Sonoma, California. The spring race in Richmond, Virginia, also will not be rescheduled.

The series, which has seen attendance and ratings drops for several years, is desperate to get going and not just for the sake of its hard-hit teams. NASCAR has issued two rounds of layoffs during the pandemic — cuts last week decimated staffing at many race tracks — and those still employed took pay cuts, furloughs or forced vacation.

NASCAR last fall closed its $2 billion purchase of International Speedway Corp. to consolidate control of 12 tracks that include Daytona, Talladega and Homestead-Miami Speedway. The move gives the France family almost total autonomy of the largest racing series in the United States and flexibility to make its own plan to survive the pandemic.

Still, making money means being on the track even if the full 36-race Cup Series schedule isn't possible. NASCAR said it wants to run at least seven Cup races within driving distance for the teams before it ventures outside the South.

For now, Hamlin said drivers have faith in NASCAR's process.

“I’m pretty certain that no matter what, we’re in an advantage because we’re a non-contact sport, especially with the players themselves,” Hamlin said. "I’m confident that we can go from our street car that we drive to the racetrack into our race car (and) not be within six feet of anyone, except for the person that is on the window net.

“We’re going to be able to do this and it should be pretty effective.”