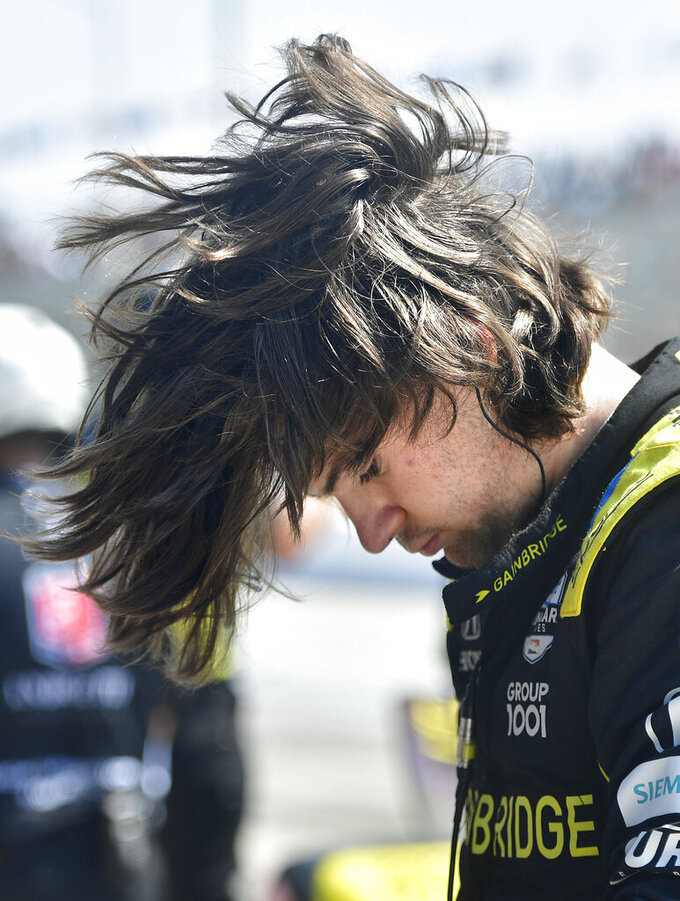 A professional race car driver by day and drummer in a band by night, California surfer Colton Herta is as Gen Z as you ever will see.

He's 21 with a perfect flow — Herta rocks the lettuce haircut — dates a University of Southern California co-ed and is a taco truck connoisseur.

Herta is also the perfect candidate to become the first American driver in Formula One since 2015.

Weekend reports surfaced that Michael Andretti is in talks with Swiss-based Sauber to take over the Alfa Romeo team and put his young driver in the last remaining open seat on the F1 grid. Is it true? The Andretti camp said there was no news beyond Andretti's stated desire to own an F1 team.

Could it happen? Anything is possible if Andretti has $200 million to cover F1's required buy-in fee.

Andretti is expected to be in Austin, Texas, next week at the U.S. Grand Prix to further explore his F1 desires. Asked last month by The Associated Press how his pursuit was going, Andretti said he'd yet to find a team for sale.

Andretti was frustrated at the lack of American representation in the series and rattled off some names of drivers in current F1 seats or in reserve roles that he rated below Herta. His father, Mario, has been banging the drum for Herta all year, so it would be no leap to assume that if Andretti gets an F1 team he would want Herta. The globetrotting series needs American representation and an Andretti-Herta combo is a money-making play.

Liberty Media, a U.S.-based investment firm, took over F1 in 2017 and has slowly been gaining a foothold in North America. The series has gained valuable American exposure through the popular Netflix behind-the-scenes “Drive To Survive” docuseries, and next May's inaugural race in Miami around the Dolphins’ NFL stadium and will give F1 four North American stops in 2022.

F1 has one American team owner, but Gene Haas since 2016 has shown no desire to commit to the development an American driver. He hired rookies Mick Schumacher of Germany and Nikita Mazepin of Russia this year, but the team has nose-dived from a mid-pack operation to the worst in F1.

Mario Andretti won 12 F1 races and the 1978 world championship; Michael Andretti drove a miserable 13 races for McLaren in 1993 before he was sent back to the U.S. for good with three races remaining. They both believe the red, white and blue needs proper F1 representation and a driver racing under the American flag.

Mario Andretti raced under “Old Glory” and his 1978 win at the Dutch Grand Prix is the last F1 victory by an American. Alexander Rossi, now an IndyCar driver for Andretti with an Indianapolis 500 victory, in 2015 was the last American to start an F1 race.

An Andretti and Herta pairing would undoubtedly be appealing to Liberty and its long-term North American goals.

Is this what Herta wants, though? He tried the F1 route once already and moved to London alone at 15. But he never got a fair shake and returned to the U.S. in 2017 to try IndyCar.

Herta had a full-time seat two years later and became IndyCar's youngest winner at age 19. Now he has completed three full seasons, has six career victories and, with some consistency from Andretti's cars, would be a championship contender.

Herta signed a two-year contract extension in May, around the same time Mario Andretti was hawking him for F1. AP asked Herta then about the F1 buzz, which led to some reflection on his time in Europe.

“I thought when I was over there I deserved an opportunity, or at least a shot with a junior program, but unfortunately it didn't work out,” Herta told AP. "But it otherwise did work out because I got to come home and race in IndyCar and that was my main goal. I've always, always wanted to race in IndyCar.

“I know that the time to race in Formula One is short and I would have given that a shot, but I knew I'd always be able to go back to IndyCar. And I always planned to primarily race IndyCar for most of my career.”

Maybe he tempered his goals because of the grim odds against an American making it through the European ranks to the top. There are only 20 seats on the F1 grid and none of the teams is presently developing American drivers.

Herta was a sponge during his two years in Europe, where he said Trevor Carlin gave him ample track time between his 30 races and additional 25 test days, and he learned how to talk to engineers and advocate for himself in competitive situations.

“When you don't think you are getting a fair shot, you have to speak up, and I know it might seem hard for a 16-year-old to argue with adults, but you have to,” Herta said. “When I came back, I was 16 but I felt like I was 25 because of all the knowledge I have about racing. And I wasn't afraid to speak up for myself.”

A lot of things would have to fall into place to get Herta back to Europe, beginning with Andretti actually acquiring a team. Herta would also need an exemption to obtain the “super license” required to race in F1. The maddening super license system is how F1's governing body determines which drivers are qualified to compete in the series; as of today, Herta isn't eligible.

Whatever happens in Austin next weekend or further down the road, if Andretti can get his foot back in the F1 door, expect to see Herta not far behind him.