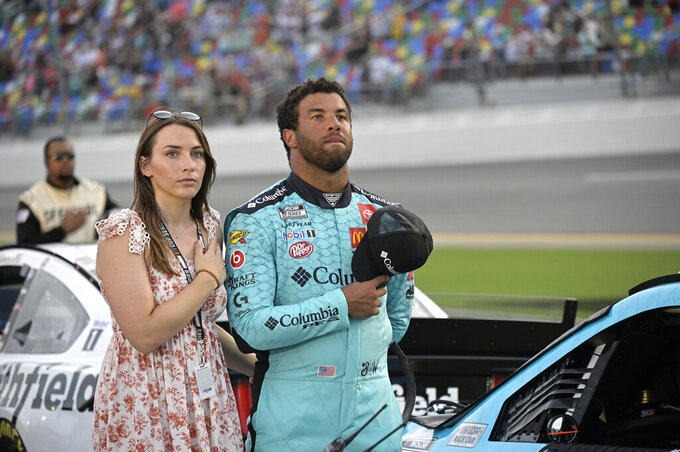 FILE - Driver Bubba Wallace, right, stands next to his vehicle with his fiancé Amanda Carter on pit road before a NASCAR Cup Series auto race at Daytona International Speedway, Saturday, Aug. 28, 2021, in Daytona Beach, Fla. Wallace’s rain-shortened win at Talladega Superspeedway last October was a career breakthrough, but now Wallace wants more. He returns to Talladega for Sunday’s race as a legitimate threat, and Wallace does believe he can win. (AP Photo/Phelan M. Ebenhack, File) 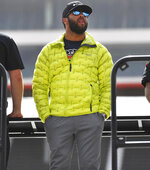 TALLADEGA, Ala. (AP) — Bubba Wallace still has the voice message Michael Jordan left him after Wallace's first Cup Series victory. His winning Toyota is currently housed at the NASCAR Hall of Fame but will eventually be his to display.

Wallace's rain-shortened win at Talladega Superspeedway last October was a career breakthrough and now Wallace wants more. He returns to Talladega for Sunday's race as a legitimate threat, but the task facing 23XI Racing is contending at every track on the NASCAR schedule.

“The opportunity is so high to go out and win any race. There's a lot more races than just Talladega and Daytona that we can look forward to,” Wallace said in an interview with The Associated Press. “We have races that we look forward to throughout the year, and that's different than years past. ... Just showing up and knowing you have an opportunity automatically makes your mind shift tenfold.”

It's been the kick in the firesuit that Wallace has needed in his fifth full season at NASCAR's premier level. In three seasons driving for Richard Petty Motorsports, Wallace accumulated a meager three top-five finishes and 34 laps led over 108 races.

But his life changed in 2020 when Wallace, the only Black driver in the Cup Series, took a public stance on social and racial justice. His position was amplified as NASCAR was one of the only major sports competing in the early months of the pandemic and companies took notice: Wallace pulled in a variety of new-to-NASCAR sponsors in DoorDash, Columbia Sportswear and Dr. Pepper, and the funding helped three-time Daytona 500 winner Denny Hamlin start a race team built around the driver.

Hamlin got Jordan to come aboard as co-owner, and 23XI Racing, despite expected growing pains in its first season, helped Wallace improve his statistics across the board. He equaled his career top-five finishes with three last season, led a career-high 62 laps and finished a career-best 21st in the standings.

23XI has since expanded to two cars and added former Cup champion Kurt Busch to its lineup, and, in the new Next Gen racecar, Wallace has been racy. He opened the season with a runner-up finish to Austin Cindric in the Daytona 500 and was in contention to win at Atlanta Motor Speedway until a late crash dropped him to 13th.

Wallace said his crash at Atlanta was the hardest hit of his life. It re-triggered soreness in the shoulder he had surgically repaired during the offseason, and it took about four days of rehabilitation until his entire body felt ready to race again.

But when he got back in his No. 23 Toyota, Wallace was ready to go.

It's part of an intentional shift in attitude Wallace has made this year and applied every time he shows up at the track. Be it a tire test earlier this week at Charlotte Motor Speedway, or a track where he's typically struggled, Wallace's intent is to be fully engaged with his race team.

“Since 2015, that's when my career path shifted,” Wallace said of his move from two seasons driving winning trucks for Kyle Busch Motorsports to slugging along in the Xfinity Series for Jack Roush's slumping team.

“It was just showing up and the work that you put in was good enough for 15th,” he added. “So it was like ‘Well, what’s the point of trying any harder?' I feel like I've now broken that mold and now I'm like ‘Hey man, if you put in that extra work, it’s definitely going to pay off.' I've seen it and I've lived it now and that's the confidence-booster you need.”

His journey has been aided by his fiancé, Amanda, who by nature takes a more positive approach than Wallace generally does to the speedbumps in his path. She's with him at nearly every race, was part of sponsor McDonald's launch of a new line of racing-related streetwear alongside Wallace, and has been busy planning their New Year's Eve wedding.

“I just sign the checks,” Wallace said, “but she's still looking for a photographer.”

As calming as she's been for Wallace as he's taken the biggest step of his NASCAR career, the 28-year-old can't bring himself to give Amanda all the credit.

“She should get a lot of it, but we're competitive so I won't give her 100% because, maybe she's at 99% but she's still got to work for that last little bit,” he laughed. "Sometimes she really (makes me mad) because I will be ranting about something ‘Can you believe this happened?’ and her response will be ‘Well, let’s look at why it happened this way.'

“She's always seeing things in a different light and it makes you appreciate that you can see things differently from someone else's perspective, you know? We're definitely polar opposites but it balances out really well. Life's good with her.”