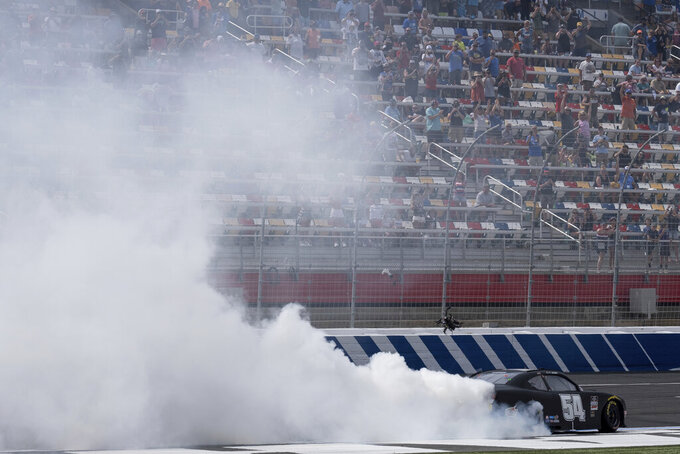 CONCORD, N.C. (AP) — Ty Gibbs is giving his grandfather plenty to think about.

The 18-year-old grandson of championship car owner Joe Gibbs took the lead with 20 laps left at Charlotte Motor Speedway and held off the field for his second Xfinity Series win of his rookie season on Saturday.

If the younger Gibbs keeps this up, Joe Gibbs might not be able to keep the hard-charging young driver out of the NASCAR Cup Series.

“You're getting me all excited now,” Ty Gibbs said. “I think about a lot of stuff all the time, processing stuff. I definitely think about that.”

It might be a tight squeeze since Joe Gibbs Racing currently fields four teams, all with championship drive in past series champs Kyle Busch and Martin Truex Jr., along with Denny Hamlin and Christopher Bell.

“They belong there,” Gibbs said. “I'm still trying to figure it out.”

Gibbs obviously has something figured out. About five hours after celebrating his Xfinity win, the teenager led all 100 laps to take the ARCA Menards Series race. It was his fourth win in five series starts this season.

“I got to burn out two (cars) in one day,” Gibbs said Saturday night.

Gibbs won the Daytona road course event in February with a late pass through a grassy area. In this Xfinity win, Gibbs overcame a spin at the end of the second stage and kept his patience until the end when he came out on top of a side-by-side duel with NASCAR Cup Series racer Chase Briscoe, who lost control and surrendered the lead to Gibbs.

Gibbs had one final challenge on the last restart but pulled away from the pack when the green flag flew like so many JGR drivers of the past to gain the win.

A proud Joe Gibbs beamed from the pits, a big smile on his face.

“It's definitely nice to win on an oval, especially so nearby hometown,” said Ty Gibbs, who was also competing in the ARCA Series race at Charlotte in the evening.

Ty Gibbs apologized to Briscoe if he had any part in the spinout, although replays seemed to show their cars did not touch.

Briscoe made his first Xfinity start of the season and led 60 laps. “We just made the wrong adjustments at the end. We were too tight. I felt he was going to get me either way," Briscoe said. "It's definitely frustrating.”

Cindric, the son of Team Penske president Tim Cindric, is flying out of Charlotte to Indianapolis to watch the Indy 500 with his family.

It was the latest racing disappointment for Daniel Hemric, who led the most laps — 105 of 200 — and yet again left without a victory in eight years in competing in NASCAR's top three series.

Hemric dominated much of the first half of the race, sweeping the first and second stages. But Briscoe passed him for the lead with 85 laps to go. Hemric's struggles got worse during a caution when he had to back up to get out of his pit stall, then was tagged with a penalty for an uncontrolled tire.

Hemric fell from second to 27th. He rallied back into the top 10 before an accident on a restart 14 laps from the finish ended his chances. Hemric has gone 187 starts in the Cup Series, Xfinity and Camping World Trucks without a win.

The race had a sense of the old, pre-pandemic days, with practice Friday and qualifying Saturday morning before the event. Riley Herbst won the single-lap qualifying to start on pole with Briscoe right beside him on the front row.

The most serious crash came on a restart on lap 150 when Ryan Sieg, who had just taken the lead out of the pits, lost grip and slid near the apron for a stretch before turning back up the track where his car was slammed hard by Josh Berry and Brett Moffitt.

All drivers walked from the their cars unharmed, with Berry and Sieg getting the OK from the infield care center.