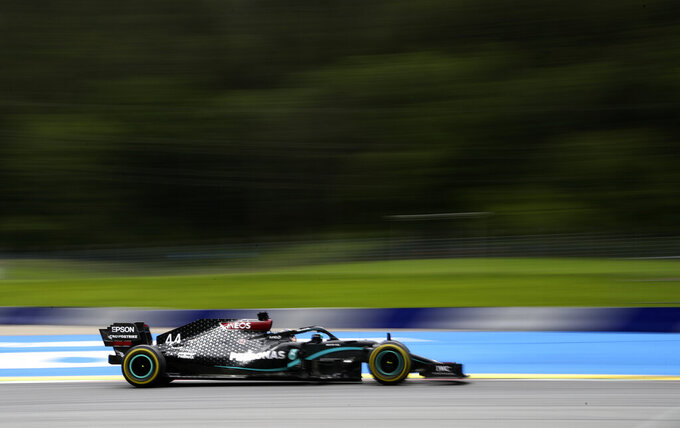 Mercedes driver Lewis Hamilton of Britain steers his car during the second practice session at the Red Bull Ring racetrack in Spielberg, Austria, Friday, July 3, 2020. The Austrian Formula One Grand Prix will be held on Sunday. (Mark Thompson/Pool via AP)

SPIELBERG, Austria (AP) — Red Bull has lost an appeal it lodged against the dual assistant steering system unveiled by Formula One rival Mercedes during winter testing in February.

The DAS helps the Mercedes car’s cornering and reduces its tire wear. On-board footage from testing in Spain showed world champion Lewis Hamilton pulling the steering wheel back and forth on the front straight, apparently changing the angle of the front tires.

Other teams were caught cold by the innovation, with Red Bull claiming in its protest that the DAS is both an aerodynamic and a suspension device. But stewards said it was part of the steering system alone and cleared Mercedes late on Friday night following a hearing.

The system will be banned as from 2021 but can be used by Mercedes and other teams this season.

“You have rules and they are interpreted and they are optimised. Clearly if one team has some doubts I feel it very healthy, and good governance, that they make a protest," Todt said Saturday. "I prefer a team to make a protest at the beginning at the championship, rather than the end of the race. So I think the approach of Red Bull has been very good, very straightforward.”