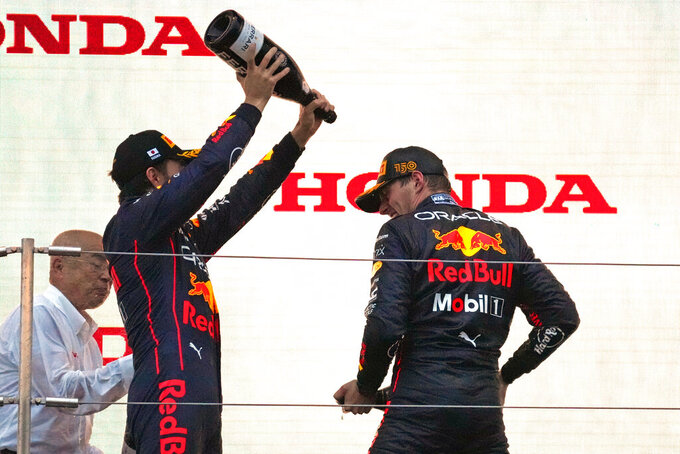 Red Bull driver Max Verstappen, right, of the Netherlands is sprayed with champagne by second placed teammate Sergio Perez of Mexico on podium during the Japanese Formula One Grand Prix at the Suzuka Circuit in Suzuka, central Japan, Sunday, Oct. 9, 2022.(AP Photo/Toru Hanai)

The FIA announced the verdict of its investigation into whether F1 teams violated the spending regulations in 2021.

“Our 2021 submission was below the cost cap limit,” Red Bull said in a statement. “So we need to carefully review the FIA’s findings as our belief remains that the relevant costs are under the 2021 cost cap amount."

The FIA said Red Bull was “considered to be in procedural and minor overspend breaches of the financial regulations” in 2021 but any sanctions would be announced at a later date. FIA did not say how much the team overspent.

Going over the budget cap by less than 5% is considered a minor breach and it appears very unlikely that Verstappen will lose his 2021 title. He beat Lewis Hamilton to the title in a controversial finish to the last race. Under FIA regulations, teams found guilty of a minor overspend breach can be punished with a fine “and/or any minor sporting penalties."

Another F1 team, Aston Martin, was considered to be in a “procedural breach" of the regulations, FIA said.

“The FIA cost cap administration is currently determining the appropriate course of action to be taken under the financial regulations with respect to Aston Martin and Red Bull and further information will be communicated in compliance with the regulations,” the body said in a statement.

F1 introduced a budget cap of $145 million last year. The aim of capping budgets was to create a more level playing field and to reduce the spending might of powerhouses such as Mercedes, Ferrari and Red Bull.

Reports speculated last month that Red Bull went above the budget cap by 5% — or around $7 million — which constitutes a more serious material breach and could be punishable by a ban. Mercedes team principal Toto Wolff demanded FIA take action if Red Bull or other teams broke the rule, while Ferrari also complained.

Earlier Monday, Red Bull team principal Christian Horner told BBC Radio 4 the team was confident it was under the cap in 2021, and it had been “shocked at the speculation and accusations that have been made by other teams."