RCR heads into Las Vegas confident a victory is within reach 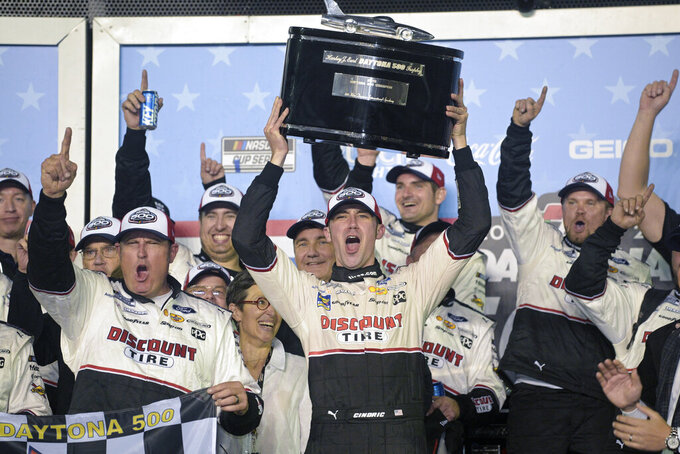 LAS VEGAS (AP) — Tyler Reddick led 51 laps in NASCAR's season-opening exhibition, and when a mechanical problem knocked him out of the race he climbed into the stands to high-five fans.

Austin Dillon, meanwhile, went on to finish third and salvage the day for Richard Childress Racing. But the race didn't mean anything, so nothing to see here, right?

Not so fast, said reigning NASCAR champion Kyle Larson, who before the Daytona 500 listed Reddick as a driver to watch this season.

“I think Tyler Reddick is going to have an amazing season,” said Larson, who praised Reddick for leading the pack during offseason testing.

“I feel when I watch him, I am watching myself just because we are both really aggressive and he seems to be even a little more aggressive and keeps things in control better than I could,” Larson added. "He’s the guy that I look at this year that I feel like is going to have the breakout season and win a lot of races.”

Dillon and Reddick didn't show much in the Daytona 500, but when NASCAR shifted last week to Auto Club Speedway in California, RCR was again very good. Reddick led a race-high 90 laps last Sunday — a career high for Reddick — and won the first two stages of the race before he was doomed by a flat tire; Dillon was runner-up to winner Larson.

Now as NASCAR rolls into its third race of the season Sunday at Las Vegas Motor Speedway, the RCR cars really do seem much improved. So much so that Richard Childress expects to be making multiple trips to victory lane this season.

“I know we can win,” Childress said this week. “We are going to win.”

Childress is a NASCAR Hall of Famer who has fielded Cup Series cars for 49 years, tallying six championships with the late Dale Earnhardt and 109 victories. But the last decade has been lean with only four wins over the last eight seasons.

Dillon, his grandson, scored the last RCR victory at Texas in 2020 and RCR has not been a credible championship contender for years. But the organization has high hopes for NASCAR's new Next Gen race car and the early commitment to that effort from Chevrolet and ECR Engines.

“We definitely tried to be the guys to embrace this new car the earliest in the process. I think some of the teams probably didn’t embrace it as much as we did,” Dillon said. "This new car is going to level the playing field. That’s what it was kind of built for. Everyone has pretty much the same stuff, it’s just how you assemble it and the set-up choices you make going into the race.

“There’s a lot being learned at a high rate right now, so we’re trying to take in all that data the best we can – as our company can – and make the best decisions going into the race so that we can adjust and make our car a little bit better than the other guys.”

It took reigning NASCAR champion Kyle Larson only two races to get back into victory lane with his win last weekend in California. He'll try to make it two-in-a-row at Las Vegas, where he's the defending race winner.

"Hopefully we get on a little streak,” said Larson.

Larson used streaks a year ago to win his first NASCAR championship and was the fourth different driver in Cup history to win three or more consecutive races multiple times in a single season. The others? Dale Earnhardt (1987) Richard Petty (1967, 1971) and David Pearson (1968) — a trio of NASCAR Hall of Famers.

Larson has eight top-10 finishes in 11 career starts at Las Vegas and FanDuel lists him as the 9-2 favorite Sunday.

Austin Cindric opened the season with a big win in the Daytona 500 and has turned it into a historical moment: After a 12th-place finish at California, Cindric maintained the points lead to become the first rookie in NASCAR history to lead the Cup standings for more than one race. Cindric was the first rookie to win the season-opening Daytona 500.

Seven-time series champion Jimmie Johnson is the only other driver to lead the standings as a rookie, but Johnson was atop the standings for just one week in 2002. Cindric leads Team Penske teammate Joey Logano by eight points in the standings.

So far, 19 different drivers have a top-10 finish through the first two races of the season — the most varied results since 1973. Aric Almirola is the only driver to notch two top-10 finishes. ... Bubba Wallace is off to the best start of his career with a second-place finish in the Daytona 500 and a 19th-place finish at Fontana. He's ninth in the Cup standings headed into Las Vegas and only 20 points out of the lead. ... Pro Football Hall of Famer and former Raider Marcus Allen is the grand marshal. Grammy-nominated country music trio Midland will perform a pre-race concert on Sunday and Tiera Kennedy will perform the national anthem.