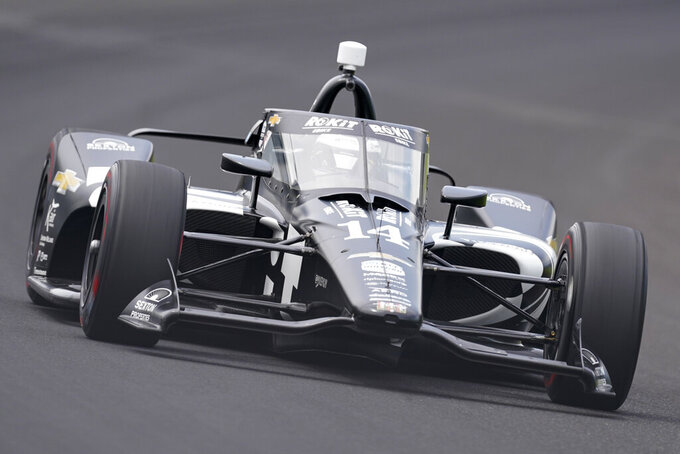 FILE - Sebastien Bourdais of France drives A.J. Foyt Racing's flagship No. 14 Chevrolet through the first turn during qualifications for the Indianapolis 500 auto race at Indianapolis Motor Speedway in Indianapolis, Saturday, May 22, 2021. Indy Lights champion Kyle Kirkwood, the most well-rounded driver of the next wave of young IndyCar newcomers, has at last found an open seat and will drive for A.J. Foyt Racing next season. Kirkwood will drive Foyt's No. 14 Chevrolet, the team said Wednesday, Nov. 10, 2021. (AP Photo/Michael Conroy, File)

Indy Lights champion Kyle Kirkwood, the most well-rounded driver of the next wave of young IndyCar newcomers, at last found an open seat and will drive for A.J. Foyt Racing next season.

Kirkwood will drive Foyt's flagship No. 14 Chevrolet, the team said Wednesday. Sebastien Bourdais drove the car last season but is switching to full-time sports car competition and Kirkwood will bring $1.3 million in scholarship money for winning the Indy Lights title to the team.

It's a one-year deal for Kirkwood, a rising American star now paired with the iconic Foyt brand for his IndyCar debut. A.J. Foyt, a four-time Indianapolis 500 winner, is considered one of the greatest drivers in history; NASCAR Hall of Famer Tony Stewart drove the No. 14 in Foyt's honor.

“Oh, man, I’m absolutely over the moon right now to be driving for A.J. Foyt Racing in the No. 14, filling in some really big shoes with Bourdais leaving,” Kirkwood said. “I’m at a loss for words because I’m ecstatic.”

Larry Foyt, president of the race team, said they jumped when Michael Andretti let his option on Kirkwood's contract expire. Andretti had a lot of balls in the air and if a deal to buy a Formula One team had gone through, he'd have taken Colton Herta to F1 and promoted Kirkwood into Herta's IndyCar seat.

Instead, Herta is staying put and an existing plan for Canadian driver Devlin DeFrancesco allowed the 21-year-old to leapfrog Kirkwood after one season in Indy Lights. Kirkwood won half of the 20 Lights races and is the only driver in history to win at every level of the Road to Indy ladder system; DeFrancesco was winless in his sole Lights season.

“I was surprised that Kyle didn’t have a full-time deal. Everyone kind of assumed he was locked up,” said Larry Foyt. "When I found out that he was available, it was kind of a no-brainer for us. The kid deserves to be in a full-time IndyCar ride.”

Andretti Autosport ran out of room for Kirkwood after replacing Ryan Hunter-Reay with Romain Grosjean, and the 21-year-old DeFrancesco got James Hinchcliffe's seat.

Andretti was forced to let go of Kirkwood, a 23-year-old from Florida who is also the endurance driver for Vasser-Sullivan Racing in sports cars. Foyt only has Kirkwood for the one season, though, and Alexander Rossi is entering an IndyCar contract year with Andretti.

Andretti is on record that he wants Kirkwood back. Foyt would like to convince Kirkwood to stay.

Foyt Racing has been in a long rebuild and is expected to be two full-time cars next season. Dalton Kellett has been in negotiations to return for a third year with the team.

No matter the lineup, Kirkwood is expected to be good right out of the gate. The only driver to win championships in all three divisions of the Road to Indy ladder system, he did it with the USF2000 title in 2018, the Indy Pro 2000 title in 2019 and the Indy Lights championship this year. The 2020 Indy Lights season was canceled during the pandemic.

Kirkwood this year tied the late Greg Moore's 1995 record of 10 Lights victories, but his future was uncertain because Andretti held his rights and other teams had to make other plans.

That all led Kirkwood to Foyt, which now might have a surprise gem on its roster. IndyCar last season had four race winners 24 or younger, including Alex Palou of Spain, who launched his championship-winning season 17 days after his 24th birthday.

“A lot of the guys have moved up from Indy Lights, kind of get into the car and they’re instantly quick,” said Kirkwood. "When I got out of the Indy Lights car and got into the Indy car, I was like, ‘Man, this isn’t that big of a deal.’ Within the first three laps I was in the Indy car at Sebring I was within a second of what Rossi did there previously.

“It’s not a massive jump and I think I’ll come up to pace pretty quickly. I’ve done that in multiple cars, so I think that’s a strong suit of mine,” he added. “I think I’m ready for it.”