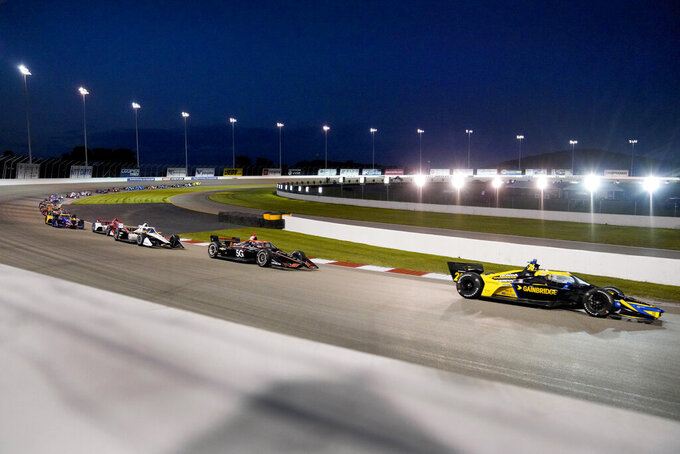 MADISON, Ill. (AP) — The IndyCar championship flipped leaders Saturday night when Alex Palou was collected in an early three-car accident that moved Pato O'Ward to the point after a runner-up finish to Josef Newgarden at World Wide Technology Raceway.

Newgarden won for the second time this season — third time of his career at Gateway — and beat O'Ward to the finish line by 0.5397 seconds. Will Power was third and Scott McLaughlin fourth to put three Team Penske drivers in the top four, and Sebastien Bourdais rounded out the top five in a Chevrolet sweep.

Newgarden led 138 of the 260 laps and jumped from fifth to third in the crowded points race. He trails O'Ward by 22 points.

“We've got to keep going," Newgarden said. “We know this is going to be a climb.”

O'Ward finished second, but claimed the points lead for the second time this season. He was 52 points behind Palou two races ago, but Palou's engine failure last week sliced it to 21 headed into Saturday night. Then Palou was part of a three-car accident early in the race that put O'Ward on cruise control.

The 22-year-old Mexican played it safe, avoided the carnage that knocked nine of the 24 cars from the race, and snagged his fifth podium of the season.

“I think people know who they can race dirty. I had a lot to lose today and they know that," O'Ward said. He then speculated that the way Alexander Rossi raced him on a restart might have caused the crash that collected rival Palou.

“I was fully alongside Rossi and he just, I guess he doesn’t look in his left mirror here, and he just turned in," O'Ward said. "So I had to slam on the brakes so I didn’t crash. And then Marcus (Ericsson) had to as well because we were going three-wide and I am assuming that is what caused the check-up behind for sure, because even for me it was very, very sudden and pretty aggressive.”

The race outside St. Louis was the final oval event on the schedule and sends IndyCar into a three-week West Coast swing to close the season. The championship race is far from decided — only 60 points separate O'Ward from Ericsson in fifth in the standings.

Palou started 21st because of a penalty for his third unapproved engine change of the season. The Spaniard quickly picked his way through the field and was up to 10th on a restart just 65 laps into the 260-lap race.

Rinus VeeKay had also worked his way through traffic and climbed from 23rd toward the top 10 but was wary on the restart because “everybody's been checking up all night.” There were four quick cautions — Ed Jones and Graham Rahal were knocked out of the race on the third lap in a crash each blamed on the other — so VeeKay said he intentionally restarted on the inside to avoid the marbles in the outside line.

But he tapped the rear of six-time and reigning champion Scott Dixon, causing Dixon to spin up the track in a crash that collected VeeKay, Palou and Dixon.

“I was definitely the one starting the accident,” VeeKay said.

Dixon had been third in the standings at the start of the race, 34 points behind his Chip Ganassi Racing teammate Palou, and dropped to fourth and 43 behind O'Ward.

“Feel really bad for myself and Alex," Dixon said. “I don’t really know what VeeKay was trying to do there and obviously took us both out of the race.”

Palou was clearly frustrated when he exited his car after the crash, and he seemed to push away the medical staff as they approached him.

Later, he said he was frustrated because it was too early for aggressive racing, because his night was over due to nothing his fault, and because he and VeeKay had driven to the front.

“If it's the last lap of the race, I can understand. But it's still early,” Palou said. “It was hard work to get from 21st to p10. He started 23rd and he was doing a good job, as well. So it's like ‘Man, we did all that hard work together. Why do we have to crash together?’"

Romain Grosjean, meanwhile, finished 14th in his first career race on an oval. The Frenchman said when he moved to IndyCar from Formula One that he'd only race on the road and street courses but decided to give it a try after watching the Indianapolis 500 on television.

He was solid through practice, qualifying and the race — and he made several strong passes around the on the 1.25-mile egg shaped oval.

“Obviously a bit disappointed with 14th at the end, especially as we had pace and got some good moves out there,” Grosjean said. "But we learned, made a couple of mistakes on cold tires that didn’t really help. Apart from that, went pretty well.”

Power pulled within four of Mario Andretti's poles record Saturday when he earned the 63rd pole of his career. It was the first of the season for the Australian, who a week ago earned his first victory of the year.

IndyCar races Sept. 12 on the permanent road course at Portland, then moves to California for a road course race at Laguna Seca and the finale on the street course at Long Beach. The championship will be decided over three consecutive weeks of racing.