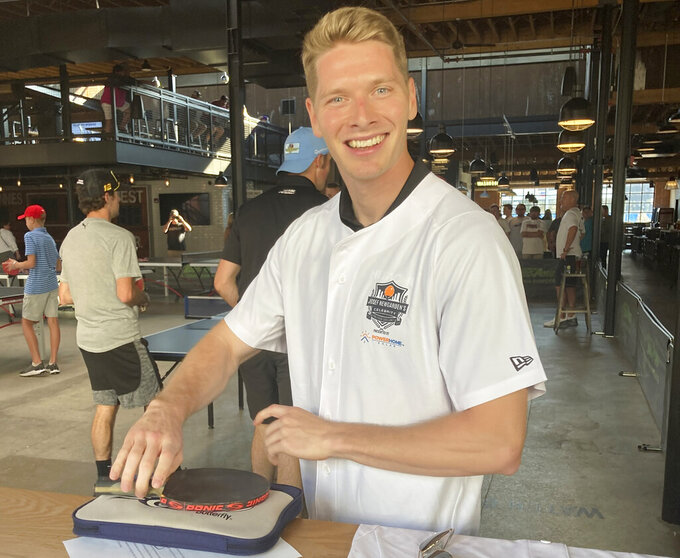 NASHVILLE, Tenn. (AP) — Josef Newgarden kept his pingpong paddle nearby in a case while the hometown driver gave his latest promotional pitch on why IndyCar will be a smash hit in the Music City.

The two-time IndyCar champ prepped for a final night of fun in his charity event before he shifted his focus to racing.

“I’ve tried to front-load all my work, get it out of the way, up until (Friday) which I think is the smart thing to do,” he said.

And then, play time called.

Newgarden’s spiel was broken up and he bounded away when fellow Team Penske driver and pingpong partner Ryan Blaney popped in and gave him a big bro hug. Newgarden and Joey Logano high-fived and Austin Cindric slapped hands and got a pat on the back.

Newgarden was the clear winner for most popular driver in Nashville, a fitting title for the Tennessee native who’s focused on a third championship at the same time he’s playing host to celebs, race fans and the casual Broadway gawkers who want to know what’s up this weekend with the open wheel cars zipping over a bridge suspended 80 feet above the Cumberland River.

“It’s going to be very embarrassing if I don’t win,” Newgarden said.

Newgarden said the remark was meant to be tongue-in-cheek. Sort of.

Newgarden won IndyCar’s last race in July at Mid-Ohio before the series took a 34-day break and sits fourth in the points standings headed into Sunday’s Grand Prix. Alex Palou and Pato O’Ward are 1-2 and Scott Dixon is third. Newgarden is 69 points behind Palou with six races left in 2021.

“I think we absolutely have the performance to win the championship,” Newgarden said. “We don’t have a lot of room for error.”

The 30-year-old Newgarden already took home one trophy this week when he raised nearly $140,00 and won his own charity pingpong tournament. His table tennis enthusiasm has deep roots in his family -- he picked up his first racket when he was about 3 years old and his late grandfather, Joe Newgarden, is in the USA Table Tennis Hall of Fame. Joe Newgarden also invented the Robo-Pong table tennis robot.

“Secretly, I hold this event because I know I’m better than everyone at pingpong,” Newgarden said. “I just want to psychologically demoralize my competition before the weekend.

Much like a pingpong ball, Newgarden bounced from one spot to the next this month, hustling to promote IndyCar’s inaugural street race in Nashville. Newgarden was raised about 25 miles north of Nashville in Hendersonville and now lives with his wife closer to the city. The championships raised his profile in the area and while he’s not quite as famous as, say, country stars Miranda Lambert or Dierks Bentley (who have their names plastered on downtown bars), Newgarden has lost the anonymity he had before he won 19 races and was hired by Roger Penske.

“I used to not get stopped outside of a racetrack or race weekend,” he said. “Now I see people in restaurants that will say hi or stop me. I’ve seen people wearing Team Penske shirts in a grocery store, and they’re like, ‘Hey, oh my gosh, I didn’t know you lived here.’”

It was hard to miss him this week.

But when NBC needed a star driver to promote the race broadcast, it turned to race legend Mario Andretti to schmooze with singer Sheryl Crow, not the personable, photogenic hometown champ. For a series that needs all the help it can get in the ratings race, it could have turned the page on the past and put the spotlight on Newgarden or a handful of other IndyCar stars.

“Yeah, next year, I’d love to be in that commercial supporting my city,” Newgarden said.

Four-time Indianapolis 500 champion Helio Castroneves spent one full season as Newgarden’s teammate at Team Penske in 2017 and watched him blossom into one of the best in sport.

“He’s a complete driver. He’s able to do more pole positions, able to win races. Last year, they almost won,” Castroneves said. “When you create that kind of scenario for yourself, you feel strong, you feel powerful, you start leading the team. It’s big shoes to fill but he’s doing an incredible job.”

Newgarden was runner-up to Dixon for the 2020 championship and shook off some devastating losses this year (he’s finished second three times) to lead all but seven of the 80 laps in his Mid-Ohio victory.

His 19 career wins are an IndyCar record for an American driver.

Should he hit 20 on Sunday, keep an eye out later that night somewhere between Acme Feed & Seed and Printer’s Alley for the pingpong-playing IndyCar star looking for a place to sing.

“Love karaoke,” he said. “I’ll go with Will Power all night long.”