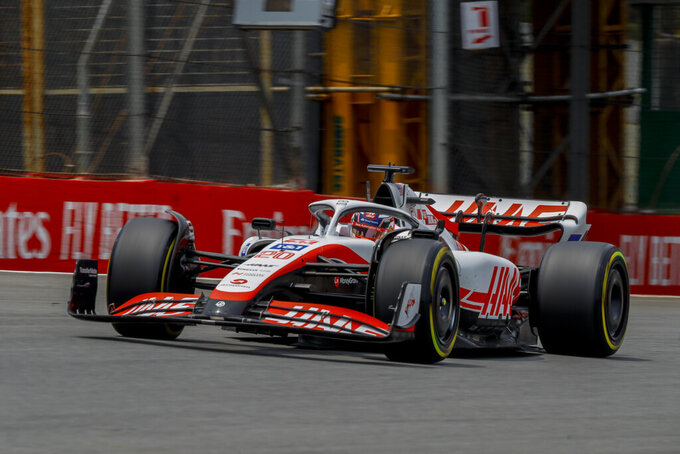 It was the first pole after 142 races for the Danish driver, who celebrated by making faces at the cameras before the third qualifying session was over. Then he jumped on his car and punched the air in the drizzle. He gave his Haas team boss Guenther Steiner an emotional hug.

“The team put me out on track exactly at the right moment,” an exultant Magnussen said.

Asked whether he expected to earn pole, he replied: “Not even close. It is incredible.”

Magnussen started in F1 in 2014 and returned to the series this year after a one-year absence as the replacement for Russian driver Nikita Mazepin.

On team radio, Magnussen was even more excited: “I never felt like this in my life," he said. Minutes before, when he was told he was in first position, he replied: “You're kidding.”

Meanwhile, Haas teammate Mick Schumacher, who is still seeking a seat for the next season, finished not surprisingly in 20th and last place.

Steiner said on Thursday he has yet to decide whether Schumacher will race for the team next year, adding he hopes a decision will be made next week. Schumacher has earned only 12 points this season. Magnussen has a paltry 24.

Qualifying was delayed by rain, which helped Magnussen. The last five minutes of the session were severely affected by the wet track.

Haas spoke about Magnussen's pole position with a touch of disbelief: “What did we just do?” the team posed on Twitter. “That was a Viking performance!”

Friday's results set the grid for Saturday's sprint race, which will determine the starting positions for Sunday's race at Interlagos.

Ferrari's Carlos Sainz, who will start the sprint in fifth position, will have a five-place grid penalty for Sunday's race. The Spaniard has added a new internal combustion engine for the weekend, a penalty-inducing sixth of the season.

Red Bull's Sergio Perez, who is still fighting to secure the runner-up position in the drivers' championship, was first during free practice earlier on Friday. He had a design on his helmet in collaboration with Disney.

“It is for the Black Panther movie, a movie that represents a lot of my country,” the Mexican driver said. “The helmet itself is unique and I really like it.”

Perez will start the sprint, which is expected to go under rain agan, in ninth position.