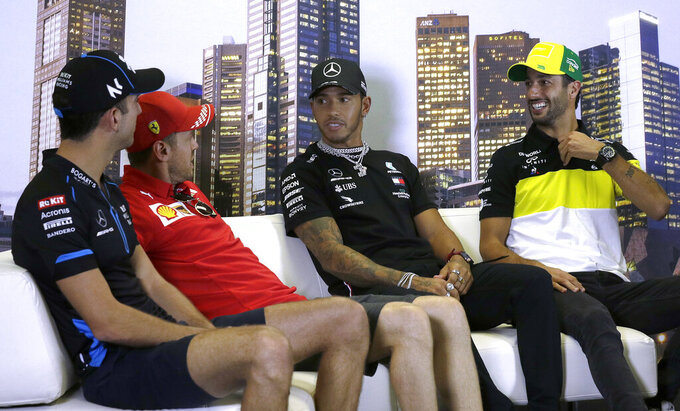 PARIS (AP) — Rule changes aimed at adding flexibility to the heavily disrupted Formula One season during the coronavirus outbreak were approved on Tuesday.

The first eight of 22 scheduled races this year have been called off, with the season-opening Australian Grand Prix and the showpiece Monaco GP canceled altogether.

There is currently no start date for the season, with the next races scheduled to be Canada on June 14, France on June 28 and Austria on July 5. Postponed races could be rescheduled later this year, if the championship gets underway.

One main change means that governing body FIA and series owner F1 can modify the race calendar without a consultation process and vote, in order to save time with quick calls.

FIA president Jean Todt has authority “to take any decisions in connection with'' F1 and other international competitions in matters of urgency. The FIA can also change rules with 60% approval from the teams rather than unanimity.

Regarding technical rules, the 10 F1 teams are banned from doing any aerodynamic development this year with regards to the 2022 season.

A previously announced delaying of the 2021 rule changes until 2022, for cost-saving purposes, was officially approved.

The one exception to this rule delay is that the banning of the dual axis steering system, which Mercedes unveiled in preseason testing, starts from 2021.

The DAS helps the Mercedes car's cornering and reduces its tire wear. On-board footage showed world champion Lewis Hamilton pulling the steering wheel back and forth on the front straight, apparently changing the angle of the front wheels. Other teams were caught cold by the innovation.

Also, the permitted amount of engine-part changes are modified to take into account the lesser number of races. There is now also a mandatory three-week factory shutdown period for engine manufacturers during April, in addition to the one already being observed by teams.

FIA said its World Motor Sport Council approved the changes by e-vote to help ‘’organize a race calendar that best safeguards the commercial value of the championship and contains costs as much as possible.''

All changes were met with unanimous approval from the teams, the FIA said, and further measures will be put into place for 2021 after more discussions with them.