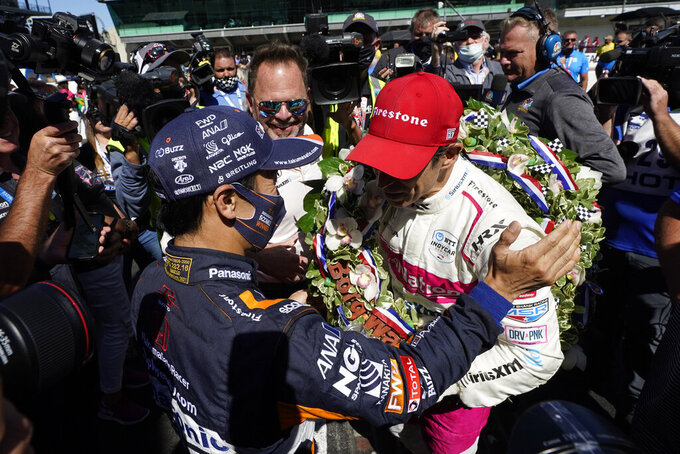 The May struggles continued for Will Power.

Yes, even on a day when one of IndyCar's most popular drivers, Helio Castroneves, captured a record-tying fourth win, it was a rugged day for some of the series other big stars, three of whom gambled on an early fuel strategy.

“The car felt great," said Dixon, the six-time series champ and pole-sitter for the race. “Unfortunately, we were trying to go a little longer, which got us in trouble."

The decision to pit a few laps later than the first cars, proved costly when Stefan Wilson hit the pit wall just 32 laps into the race. Race officials shut pit lane for the clean-up and it resulted in eight cars being forced to restart from the back of the field for making emergency stops.

Dixon's was disastrous. The No. 9 Honda, which had been so dominant in practice and on qualifying, rolled agonizingly slowly to Dixon's pit it box, out of fuel. When crew members tried to restart the car and it wouldn't, Dixon knew a second 500 win was likely not to be.

“It's racing," he said. “That’s how it goes. It’s very cool to see Helio Castroneves win his fourth, but yeah, this place is tricky and sometimes it’s frustrating."

Pagenaud recovered to get back in position to make a run, finishing third.

Dixon managed to lead seven laps though those came mostly came during pit cycles and Santino Ferrucci managed to finish sixth though he never led a lap,

The other drivers never made it back to the front of the pack.

“I was pedal to the metal the rest of the way, I didn't really care," Pagenaud said.

He surrendered the points lead to 500 runner-up Alex Palou and now trails the Spaniard by 36 points as the series heads to Detroit for a doubleheader weekend in mid-June. Dixon is trying to match A.J. Foyt's series record with seven career championships.

Power, who barely qualified for the race last weekend, drove the No. 12 Chevrolet from 32nd to sixth but spun the car on pit row on Lap 153 when he lost brake pressure. It knocked him out of contention and into a career-worst finish of 29th.

Montoya and Newgarden had better days after a tough qualifying weekend. Montoya finished ninth after starting 24th. Newgarden went from 21st to 12th.