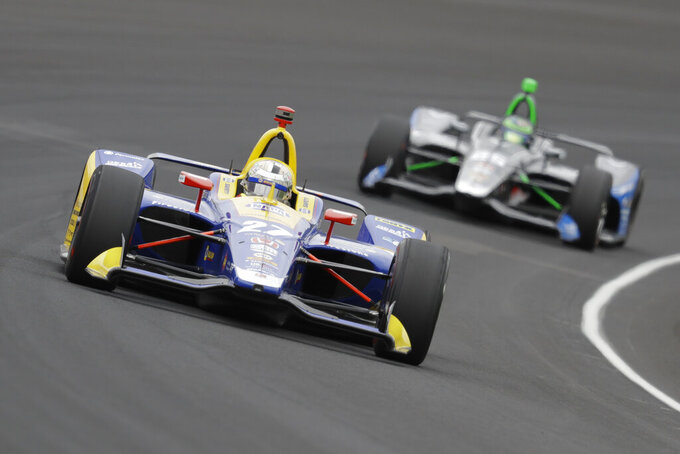 INDIANAPOLIS (AP) — In the waning laps of a rage-filled Indianapolis 500, Alexander Rossi was pacing the field back to the green flag when he made a brazen declaration to his Andretti Autosport crew.

"A bunch of hungry, angry cars behind me," he radioed. "Little do they know I'm angrier."

The finish didn't bring him any joy.

Simon Pagenaud breezed past him high on the restart, triggering a dramatic duel that included five passes in the closing 13 laps. Rossi twice regained the lead, but it was Pagenaud who made the decisive pass, taking the lead heading to the white flag and then holding on through the final lap.

It gave Team Penske another win at the Brickyard. And it left Rossi ruing a chance that got away.

"I'm happy to get a result," he said, "but unfortunately nothing else matters here but winning. This one will be hard to get over, but at the end of the day, it's a great showing."

Speed was all that mattered. Pagenaud in his Chevrolet had just a bit more.

"There's not much I can do about that inside the car," said Rossi, who won the 2016 race in his first try, and has finished seventh or better in all four starts. "That last yellow hurt us. We were doing a lot better on fuel mileage than he was. It was the first kind of nail in the proverbial coffin. And the second was I just didn't have the speed out front."

Rossi acknowledged it was "a good day for the team," but a number of incidents hurt the chances of a car he said was "by far the best in the field."

The first came on a pit stop midway through the race, when an issue with a component inside the fueling mechanism caused a problem. While a crew member frantically kept trying to get the gas to flow, Rossi began pounding his steering wheel in frustration for a stop that took more than 20 seconds.

It only cost Rossi a handful of spots, thanks to a timely yellow flag.

The second incident involved Oriol Servia, who was a lap down but found himself jockeying with the leaders with about 50 laps to go. Rossi kept trying to get around him, and at one point got pinched and nearly hit the wall while trying to make a pass, leaving him to ask: "What is he doing!?"

Rossi finally got around Servia while gesturing wildly from his cockpit at about 230 mph.

"There was a lot of lapped cars and no respect for what we were doing," Rossi said. "It was really unfortunate. Ultimately it didn't make a difference with the result."

Not with the way Pagenaud was driving down the stretch.

He took the lead on Rossi during the restart with 13 laps to go, then gave it up on the next lap, only to regain it once more. Pagenaud patiently waited for the penultimate lap, then swept through Turn 3 to retake the lead as the two of them barreled toward the white flag.

Rossi sucked up to his Team Penske rival on the back stretch, but Pagenaud slithered like a snake to keep him behind. Pagenaud then dived low as they exited the final corner, and the break in the draft created enough separation that Rossi was never able to make a finish-line pass.

Rossi said that Pagenaud was "moving in reaction, for sure," but he never thought about lodging a protest over the blocking.

Instead, Rossi tried to turn his anger into a sense of accomplishment.

"This one will be hard to get over, but at the end of the day, it's a great showing," he said. "We have to take the positives from this and the positives are the 27 boys did a phenomenal job."