In The Pits: NASCAR caps 2021 looking ahead to future growth 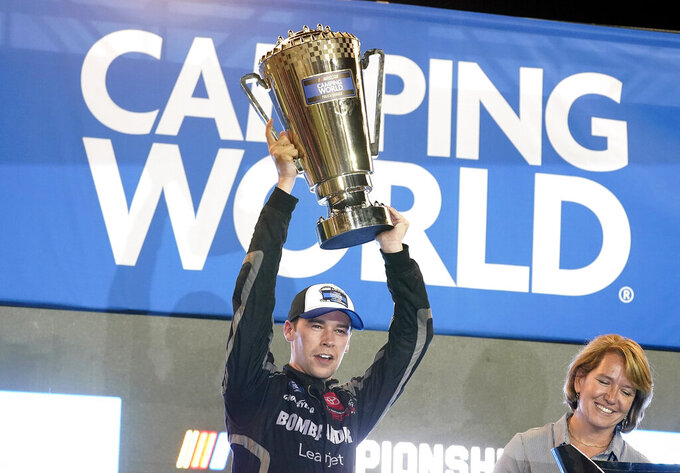 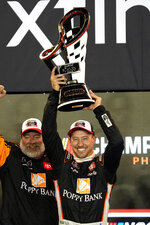 NASCAR will close its season this week with a three-day celebration in Nashville that ends with the crowning of three new national series champions in Kyle Larson, Daniel Hemric and Ben Rhodes.

NASCAR will do burnouts on Lower Broadway near popular honkytonks Doc Holliday's Saloon and Bootleggers Inn. Its 2022 cars will be on display at Riverfront Park and drivers will participate in Q&A sessions before the finale Thursday night at the Music City Center.

Then attention turns to the pivotal upcoming season.

Among the issues facing NASCAR is its Next Gen car, set to debut in February following a yearlong delay during the pandemic. The series also wants to continue tweaking its sprawling, 38-week schedule, which now includes more short tracks, more road courses and a dirt race — but puts the season finale at Phoenix Raceway for a third consecutive year next season despite calls to rotate the championship event.

NASCAR understands it must improve its at-track experience for fans and recognizes the urgent need to showcase its competitors and create interest in its current driver crop, which has generally lacked pizzazz since Dale Earnhardt Jr., Jeff Gordon, Tony Stewart, Jimmie Johnson, Carl Edwards, Matt Kenseth and Danica Patrick retired.

The answer could be a behind-the-scenes docuseries and cameras could potentially be in Nashville this week collecting footage.

Many racing series are chasing the docuseries idea since Formula One and Netflix partnered on the “Drive To Survive” program that has helped the sport explode in popularity in the United States. NASCAR President Steve Phelps was hopeful earlier this month that discussions with NBC Entertainment could lead to a show that chronicles the 2022 season beginning as early as the February exhibition race in Los Angeles.

“I think actually if we’re able to get a few contracts signed in the next couple weeks, they will begin production in December,” Phelps said. "They will be at the L.A. Coliseum. There’s a decent possibility that they will not just look at us as a segmented period of time like they were going to do in the playoffs, but they’ll extend it to potentially the entire season. We are encouraged.”

NASCAR needs its fans to care about its drivers, and it needs its superstars to be accessible to those who invest — both emotionally and monetarily — in the sport. Although NASCAR was one of the first sports to resume competition during the pandemic and the first sport to complete its entire 2020 season, its events have been anything but normal.

To get to the finish line a year ago, NASCAR scrapped all qualifying and practice sessions and three-day weekend events became one-day shows in front of fewer fans. Drivers mostly went directly from their motorhomes to the race car with little engagement with their own race teams, let alone any spectators.

Policies fluctuated based on virus positivity numbers — and Phelps himself admitted the vaccination rate in the garage is “not high enough... to me, there’s a responsibility that individuals have to each other” — but some normalcy had returned by the final two races of the season. Martinsville had one of its largest crowds in years and Phoenix saw the return of practice, qualifying and spectators freely roaming the Arizona garage area earlier this month.

Phelps wants the same Phoenix energy level at all of NASCAR’s races and the series hopes to ensure fans get the most bang for their buck.

Restrictions will still be in place this week in Nashville, the second year NASCAR chose The Music City for its awards show. The weeklong event in 2019 was wildly popular, and drivers could be spotted up and down Lower Broadway at many of the popular downtown bars.

The awards ceremony was canceled last year. Its return to Nashville promises plenty of opportunities to see the Next Gen car but few organized chances to get close to the drivers. Public tickets were not sold to Thursday night's coronation of Larson as Cup Series champion, Hemric as Xfinity champion and Rhodes as the trucks winner.

But by the time NASCAR opens the 2022 season, one week ahead of the NFL's Super Bowl in February at the Coliseum for the exhibition Busch Clash, Phelps expects enthusiasm for the new season to be soaring.

He believes NASCAR will draw “an unbelievable crowd at the Coliseum” and upward of 40% in the stands will be attending their first Cup race. NASCAR showed in 2021 it will make bold changes to the schedule — Phelps called this season the “most aggressive schedule we’ve had in 50 years" — and its plans to continue growth rolled into Los Angeles the day after Larson won his first Cup title so he could promote the Busch Clash.

Larson is NASCAR's first champion of Asian descent, and the Cup Series now includes Mexican driver Daniel Suarez and Bubba Wallace, the only fulltime Black driver at the national level. Larson, Suarez and Wallace all graduated from NASCAR's diversity program, and Phelps said series leadership will continue to reach out to new fans.

“We are going to expand the fan base. We’re doing it by meeting people where they are, whether that’s physically at a racetrack or through other mediums. There’s such great opportunity for us," Phelps said. “Going to the L.A. Coliseum to kick off our debut with our Next Gen car is a proof point, frankly, that we’re going to be bold in what we’re doing. Whether it’s the schedule or the car... we’re going to take calculated risks.”