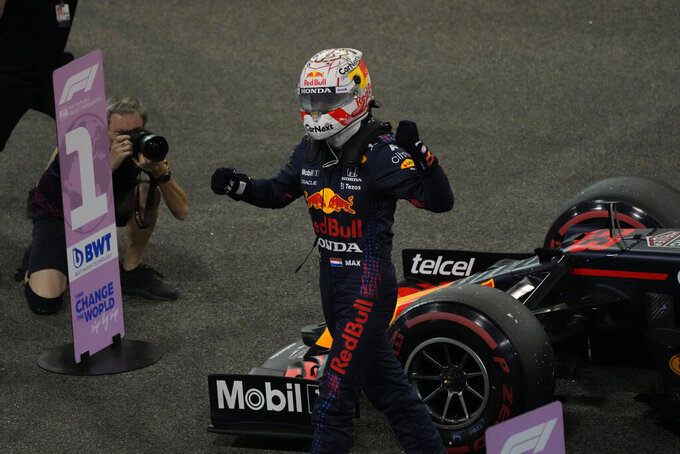 ABU DHABI, United Arab Emirates (AP) — On the pole for the Formula One finale is Max Verstappen, a breakthrough young star with an entire sports-obsessed country behind him. He is short on words, instead allowing his aggressive driving to speak for him.

Next to him on the starting grid at the Abu Dhabi Grand Prix on Sunday is Lewis Hamilton: The seven-time world champion is a trailblazer — the only black driver in F1 — a global sports icon and activist for social change.

After 21 races of the most competitive, dramatic season in at least a decade, they arrived at Yas Marina Circuit tied in the standings, a statistic so improbable it’s not happened since 1974.

One of them will emerge as the world champion: Either Hamilton earning a record eighth title that would break a tie with Michael Schumacher. Or Verstappen, who would be the first Dutch victor in F1 history.

“This is what this epic championship deserves,” Mercedes head Toto Wolff said after Vertstappen claimed the pole on Saturday.

This is a title fight that’s been called among the greatest in sport history, likened to both James Hunt vs. Niki Lauda in 1976 and Ayrton Senna vs. Alain Prost in 1990.

The contenders have gone wheel-to-wheel across four continents, combining for 17 wins; Verstappen won nine, giving him the title if the season ends in a tie. They've crashed into each other three times — Verstappen's car actually landed atop Hamilton's once — and their teams have feuded openly to ensure the fourth season of the Netflix docuseries “Drive To Survive” will be the best one yet.

And now a first title is in reach for Verstappen, who overcame a mistake in qualifying to win the pole with a tow from Red Bull teammate Sergio Perez. The last six pole winners in Abu Dhabi have won the race — including Verstappen last year, when he led all 55 laps to score the 10th win of his career.

The 24-year-old son of former F1 driver Jos “The Boss” Verstappen has challenged for the title with a driving style criticized by former champions — including Hamilton — as beyond the acceptable on-track risk.

Verstappen has complained he's held to a higher standard than other drivers, and he wants the stewards to stay out of this race. After winning the pole Saturday, to the delight of a throng of fans wearing Dutch orange, Verstappen said he was ready for the final round of this fight.

“First of all, I never look at the stats because these things can change at the start or whatever, the first lap. I just need to focus on what we can control as a team," Verstappen said. "I think what’s most important is good sleep. But also I have friends and family around, so I am not going to do anything different to what I normally have been doing.”

Verstappen has never won a championship at a level higher than karting, while Hamilton has been involved in his own tense battles before. He beat Felipe Massa by one point for his first championship in 2008, then suffered a five-point loss to teammate Nico Rosberg in 2016.

He said this year is “a million times different” from 2016, his last challenge and defeat.

“Much, much different scenario,” said Hamilton, who added he’s a better driver and better teammate now. “We’re just in a different place in life. We’re just in a much better and happier place.”

Verstappen led by as many as 32 points in the standings; it was 19 points before Hamilton won the last three races to move into a tie. One more strong Sunday would be all it takes to push Hamilton past Schumacher, one of F1's all-time greats.

Hamilton acknowledged hearing the Verstappen fans jeering him following Saturday qualifying, and said he'll use it as motivation.

"There’s a lot of orange here,” he said. “You’re always surprised by the boos no matter how many times you experience it. But I don’t care, it doesn’t make a difference to me. If it was a cheer, if it was a boo, it makes no difference to how I go about my life. If anything, I use that as fuel.”

Hamilton arrived at the circuit Thursday wearing a sweater with an expletive on the back, perhaps a message to Verstappen and Red Bull? (It's no secret that Mercedes and Red Bull most definitely do not like one another, even if Wolff and Red Bull principal Christian Horner shook hands on Friday and wished each other luck.)

When the drivers were asked after qualifying to list positives about each other, Hamilton turned to Verstappen and said “do we really need to do it?"

There's been concern the two will crash one another again, giving Verstappen — often the aggressor — the title. Race director Michael Masi has warned the drivers to behave or face consequences that could cost the championship.

Lando Norris, who qualified third for Sunday, has the best seat in the marina come Sunday.