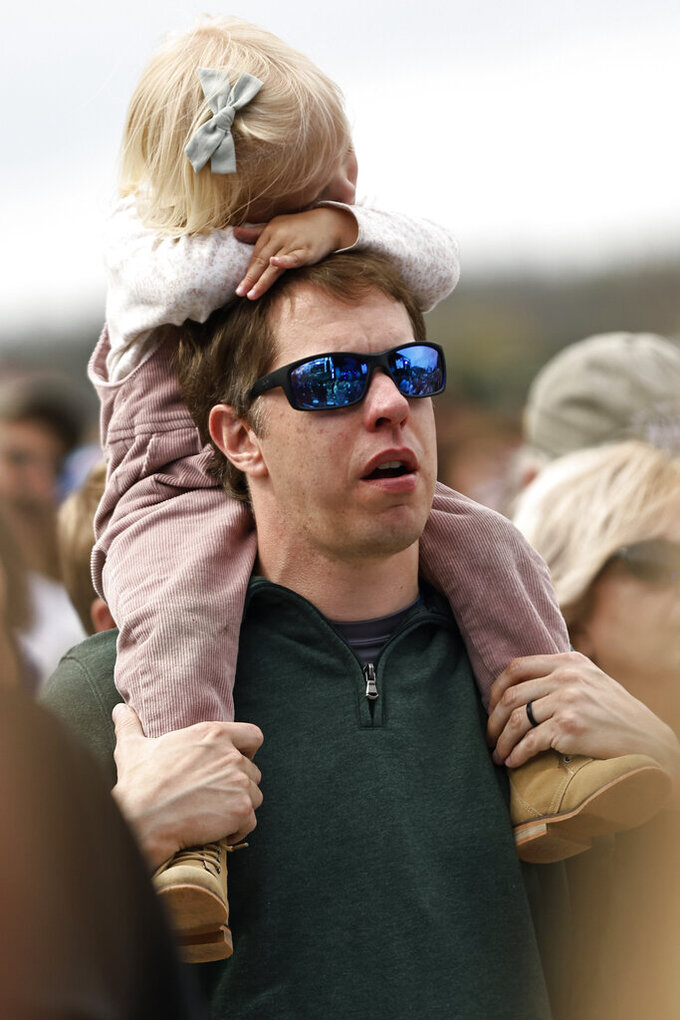 Driver Brad Keselowski sings along with Chris Tomlin as he holds his daughter Autumn during an Easter service before a NASCAR Cup Series auto race, Sunday, April 17, 2022, in Bristol, Tenn. (AP Photo/Wade Payne)

DARLINGTON, S.C. (AP) — It's Next Gen vs. Old School when NASCAR's new racer takes on its oldest superspeedway at Darlington Raceway on Sunday.

“It kept me up this week thinking about that,” said Ross Chastain, who has won twice this season. “The Cup car right now is just so volatile to drive, especially the first few laps of practice, and I don't expect Darlington to be easy.”

It rarely is over 72 years of racing.

The adage is that only the most experienced pilots succeed at the track called “Too Tough To Tame.” Only a handful of racers — Denny Hamlin, Kevin Harvick and Kyle Larson — took part in a tire test here last month, according to track president Kerry Tharp.

Tire falloff seemed as severe as always, Tharp said, although defending Cup champ Larson had some difficulty finding a balance at the test.

Erik Jones, who won here in 2019, believes things can't be much different from always. Darlington is always a handful as drivers are forced to run close to the wall — and avoid the dreaded “Darlington Stripe” — to compete.

Turns 1 and 2 are shaped differently from 3 and 4 (the result of a minnow pond that builder Harold Brasington contractually could not fill in), meaning racers can't rest easy entering the corners.

“I expect a lot of sliding around, just like always," said Brad Keselowski, the former NASCAR champion who won the Southern 500 here in 2018.

The Next Gen reviews have been positive in the first half of this season. There have been nine drivers winning the first 11 races, with only Chastain and William Byron taking the checkered flag more than once this season.

Chances are strong it will be a Hendrick Motorsports driver out front at the end of Sunday's 293-lap race.

Chase Elliott won Dover's rain-delayed race, becoming the last of Hendrick's four entries to win a race this season. He likes what he's seen of the Next Gen car so far and expects his team to have another strong showing at NASCAR's most unconventional track.

Elliott said he hadn't been able to put a complete race together until last week's win at the Monster Mile. “We just have to better execute for the entirety of the event,” he said. “I think as long as we're doing those things we can run and compete with the best of the garage.”

No surprise here: Drivers from Hendrick Motorsports and Joe Gibbs Racing are the favorites to win at Darlington this Mother's Day, according to FanDuel Sportsbook. Hendrick's Kyle Larson is the betting favorite at 5-1, followed by JGR's Martin Truex Jr. at 6.5-1. Hendick's Chase Elliott and Gibbs' Denny Hamlin are next at 8-1, with Kyle Busch of JGR at 10-1 and Hendrick driver William Byron at 12-1.

Darlington is hosting its latest tribute to NASCAR history with its throwback weekend. Many cars competing in the Cup Series, the Xfinity Series and the truck series will have paint schemes honoring the sport's rich history. This is the first time since 2019 that the celebration will be run without COVID-19 guidelines in place, although officials caution visitors to stay smart and safe.

NASCAR champion Kyle Larson will run in a car painted to look like the one run by the late Tim Richmond in 1984.

Larson said Richmond was known for leaving it all out on the track. “He would go full send on crazy moves and things that other drivers wouldn't even try,” Larson said. “So I'm going to go out there and try to drive it like Tim would.”

Rodriguez was a three-time Tampa Bay Area Racing Association (TBARA) Dirt Sprint Car champion and passed his love of motorsports to Almirola. So Almirola has decked out his No. 10 Cup car in his grandfather's vivid red paint scheme.

“He loved red because red is fast,” Almirola said. “He was very particular about his race cars always being immaculate.”

Hendrick Motorsports announced a three-year contract agreement with racer William Byron this week, meaning all four of its drivers are locked into the company through 2023.

Chase Elliott is signed through 2027 and Byron through 2025. Their teammates Kyle Larson and Alex Bowman have deals that run out after next season.

Elliott believes the Hendrick teams are “in a really solid place right now,” he said. “I feel like we all work pretty well together. It's just kind of an easy flow in operation."

The quartet has combined for five wins the first 11 races this season.