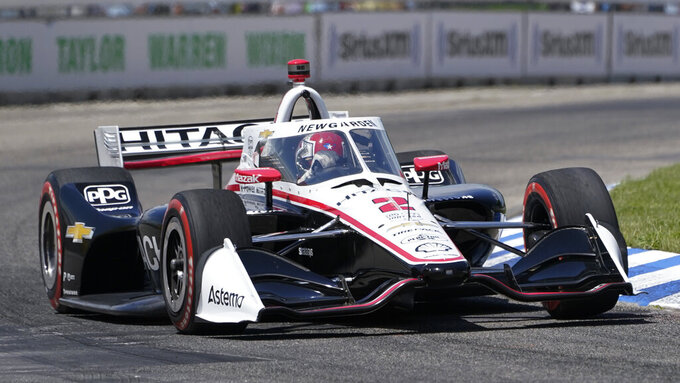 DETROIT (AP) — Josef Newgarden is eager to put the Indianapolis 500 behind him and focus on reclaiming his spot atop IndyCar while celebrating Chevrolet in its backyard.

Newgarden won the pole for the Detroit Grand Prix, a race that will be held Sunday on Bell Isle for the final time. The race will return to downtown Detroit, where it started in 1982 as a Formula One event, next season.

For now, Newgarden can give Chevrolet its 100th victory since the manufacturer returned to IndyCar in 2012, four years before the American driver partnered with the brand. Newgarden has won a pair of championships with Chevy, and he's IndyCar's only two-time winner this season.

He was the points leader following his April victory at Long Beach, but an underwhelming showing at Indy dropped Newgarden to fifth in the standings headed into Detroit. This is the place to turn it around — the grand prix is sponsored by Chevy and run in the shadow of its headquarters.

And, Newgarden is bemused by the twists of the IndyCar season. Through just six races — with 11 still to go — the dizzying pace of new frontrunners has made each event a celebration of someone new.

“IndyCar is an interesting championship at the moment because it seems like every weekend there’s a new superstar. It’s comical at this point to me,” Newgarden said. "The reason I think that’s happening is because it’s so competitive. You don’t have one team clearly dominating all sessions.

“You get new winners, all of a sudden, ‘They are going to be the championship winner, they’re the greatest new thing to come to IndyCar.’ It’s just unpredictable. It’s all over the place. I think it’s pretty wide open."

Marcus Ericsson vaulted from eighth to first in the standings following the Swede's win in the Indianapolis 500, a race worth double points. Pato O'Ward of Mexico trails Ericsson by 13 points, was runner-up to Ericsson at Indy, and split the Detroit weekend with Ericsson a year ago when each earned their first career IndyCar victory during a doubleheader event.

Ericsson will start eighth Sunday, the lone IndyCar race of the weekend. O'Ward is fifth.

Newgarden, meanwhile, became the seventh different pole winner through seven IndyCar qualifying sessions this season. He won the pole for Team Penske on the temporary street course for the third time in his career as time expired on Saturday's qualifying session.

Newgarden also started from the pole at Belle Isle a year ago and led 67 of the 70 laps in a dominating run that appeared to be headed toward Newgarden's first win of the season.

Instead, a late caution caused a final restart and Pato O'Ward drove through the field over the final seven laps to snatch his first victory of the season; Newgarden finished second.

“I've been here before, we did this last year and fell short,” Newgarden said. “We've got to be really focused on the race and how we're going to get to the end and finish it off.”

Honda, the Indy 500 winning engine maker, had four cars in the Fast Six of Saturday's qualifying. Chevrolet had just two representatives, but claimed the pole with Newgarden.

The four rounds of qualifying all had its share of action.

Kyle Kirkwood, fastest in Friday practice and the pole-winner for the GT class in Saturday's IMSA sports car race, crashed in Saturday morning practice and injured his right hand. He failed to advance out of the first group and said after his taped hand “isn't great.”

Kirkwood went on to claim class victory on Saturday in the sports car race, but the rookie's hand was heavily iced following his stint in the IMSA race.

In the second IndyCar qualifying group, Felix Rosenqvist was penalized for impeding Jimmie Johnson's qualifying run. In the round of 12, IndyCar investigated an incident between reigning champion Alex Palou and Will Power. No action was taken, and Power was initially angry at Palou but ultimately conceded neither he or Palou was advancing into the Fast Six.

Andretti Autosport had an opportunity at a fantastic Indy 500 rebound and the team was poised to put three of its four drivers into the Fast Six. Romain Grosjean crashed, though, and it ruined any shot of his Andretti teammates Colton Herta and Alexander Rossi advancing.

The Grosjean crash also eliminated Scott Dixon of Ganassi and Scott McLaughlin of Penske from advancing.

Grosjean will start 12th; Johnson wound up 22nd and the penalty on Rosenqvist dropped the Swede to 26th, last in the field.