Knocked out of Brickyard, Johnson copes at home with virus 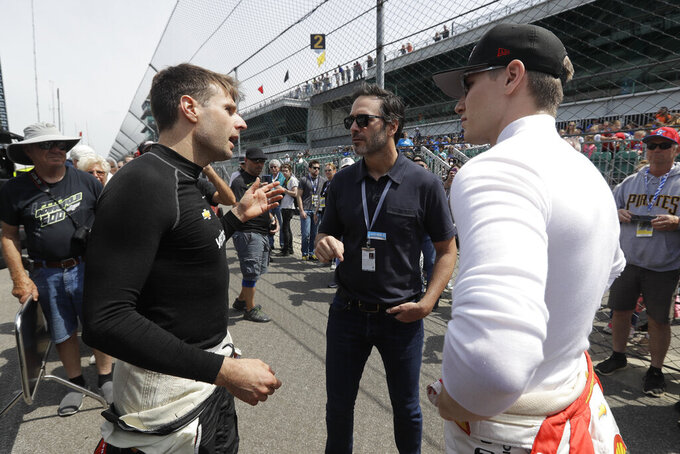 FILE - In this May 16, 2019, file photo, NASCAR driver Jimmie Johnson, center, talks with Will Power, left, of Australia, and Josef Newgarden during practice for the Indianapolis 500 IndyCar auto race at Indianapolis Motor Speedway in Indianapolis. NASCAR seven-time champion Jimmie Johnson will test an Indy car next week on the road course at Indianapolis Motor Speedway. He’s long said he is open to racing in the series but did not want to compete on ovals out of safety concerns. On Friday, July 3, 2020, he indicated recent safety improvements have softened his stance and the Indianapolis 500 is not entirely out of the picture(AP Photo/Darron Cummings)

INDIANAPOLIS (AP) — Jimmie Johnson and his family took every precaution to avoid the coronavirus.

They washed their hands frequently, diligently followed the face-mask guidelines and even left their home in Charlotte, North Carolina, for the less densely populated Aspen, Colorado.

And yet both Johnson and his wife still tested positive for the virus this week — knocking the seven-time NASCAR champion out of what was expected to be his final Brickyard 400.

Johnson is the first NASCAR driver to test positive for the virus that causes COVID-19 and it will end his streak of 663 consecutive Cup starts. It's also temporarily disrupting his family life as he and wife, Chani, attempt to quarantine while still raising their two daughters. Both girls tested negative, Johnson said.

“We’re being very responsible in our home and trying to self-isolate, but at the same time we have to parent on top of their fears," Johnson said Saturday by Zoom from Colorado.

Johnson was in Indianapolis on Wednesday to test on Dallara's simulator. He then flew back to Aspen and was scheduled to return to Indy for Sunday's race.

He didn't have an inkling anything was wrong until Friday.

Chani Johnson had been experiencing seasonal allergy symptoms in the summer mountain air, and the 44-year-old Johnson was using a routine prescription to treat his own seasonal issues.

Chani Johnson, a “rule follower" her husband said, went for a coronavirus test because of the allergies. Her results came back positive Friday morning and Johnson and their daughters immediately went for their own tests.

“It would be very easy right now to get bummed out," said Johnson, who is stepping away from full-time NASCAR racing at the end of the season. "If it wasn’t for Chani's diligence to do the right thing, we’d be going on with life as normal and who knows who we could have come in contact with and infected.”

The good news is doctors believe Johnson's wife already endured the worst of COVID-19. Johnson said aside from a tickle in his throat, he's asymptomatic.

But the ramifications reverberate around the racing community.

Johnson said he has spoken with representatives from the Centers for Disease Control and Prevention as part of a contact tracing initiative and continues to seek out answers to a litany of questions. One thing he's not certain about is a positive test for antibodies he said he received early in the pandemic.

"Once I clear this and go back into life, I assume I still need to be very cautious and I could be re-infected once again. There are just so many questions regarding this virus and what means what. I still don’t have clarity. The longer I get into this and the more issues I deal with, the more questions I have.”

He can't return to racing unless he's free of symptoms and has two negative tests in a 24-hour span. Justin Allgaier will replace Johnson in Hendrick Motorsports' No. 48 Chevrolet and one team member — the mechanic in charge of Johnson's cockpit — has been quarantined because he's the only Hendrick employee to have come into close contact with the driver.

“Purely out of precaution, the interior mechanic was the one person we could identify who had contact with Jimmie or his suit or whatever," said Jeff Andrews, the team's vice president of competition.

A new race strategy also may be necessary.

Instead of starting fourth, the position Johnson earned in a random draw, Allgaier will have to drop to the back of the field because of rules regarding driver changes.

NASCAR President Steve Phelps said on NBC the series is hopeful Johnson can be back by next Sunday at Kentucky Speedway. The series does not test for the coronavirus and Phelps did not indicate Johnson's positive result will change that.

“I think the protocols have actually worked really, really well for us,” Phelps said in the pre-race show. “Obviously, it is unfortunate that Jimmie is going to be out of the car this weekend. I think if you look at the procedures that we have in place and the policies that we have in place, really, to protect the drivers, the crews, our own officials and anyone who is working at the race track — the number of positive tests that we've had has been so, so far and few and far between."

Johnson is the first NASCAR driver to test positive since the sport resumed in May. Two teams have confirmed that shop-based employees who do not travel to the track have had positive tests.

NASCAR granted Johnson a waiver to compete in the playoffs if he qualifies. Johnson is 12th in the standings, 63 points inside the playoff picture.

Meanwhile, back at the mountain home, adjustments are being made.

Johnson plans to watch NASCAR racing on television for the first time since he became a Cup regular in 2002, a potential preview of how retirement may look, while trying to figure out how to celebrate the holiday weekend and his older daughter's 10th birthday.

“We’re very scared to be around them and interact with them, not to mention my oldest has her birthday coming up on the seventh," he said. “We’re going to be celebrating inside our house, but it’s really been tough for our kids to grasp."