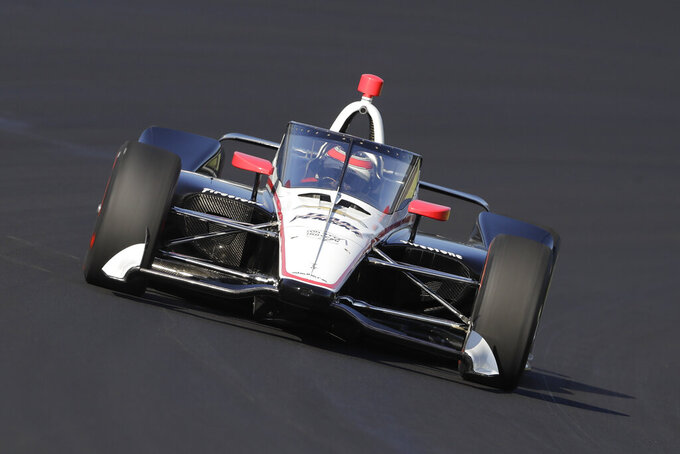 FILE - In this Wednesday, Oct. 2, 2019, file photo, Will Power, of Australia, drives into turn one during the Aeroscreen testing at Indianapolis Motor Speedway in Indianapolis. After 10 months of testing, the canopy-shaped cockpit protection is intended to protect the driver from debris. (AP Photo/Darron Cummings, File)

ST. PETERSBURG, Fla. (AP) — IndyCar and NASCAR will race this weekend without spectators, while Formula One's Australian Grand Prix was called off entirely, as auto racing joined other sports in being affected by concerns over the COVID-19 pandemic.

IndyCar pushed forward with Sunday's season-opening race after the mayor of St. Petersburg said Thursday fans would not be permitted to attend. Only essential personnel can enter the fenced area surrounding the temporary street course through downtown St. Petersburg.

Competitors will have to answer a questionnaire for health screening before entry. Practice sessions, the driver autograph session and other events Friday were canceled. IndyCar typically draws about 130,000 to a three-day street festival capped by Sunday's race.

NASCAR said it will run its next two races without fans, starting this weekend in Atlanta and continuing at Homestead-Miami Speedway. Miami-Dade County Mayor Carlos A. Gimenez said the county was under a state of emergency and NASCAR racing would be postponed unless officials chose to run the race without fans.

“These events will be restricted to competitors, crews, officials and other necessary personnel to conduct the race," NASCAR said in a statement. "We will work with public health officials as we determine future scheduling beyond these events.”

The stock car series had already announced changes designed to give drivers 6-foot buffers during media sessions and move its pre-race competition meeting to an outdoor location.

Mark Miles, President and CEO of Penske Entertainment, which owns IndyCar, said rescheduling the St. Petersburg race would have been “very difficult. No one knows what the next several weeks or months will look like. They’ve built the track. It’s tough to build it twice.”

Also Thursday, organizers of the Grand Prix of Long Beach said that event won’t be held as scheduled on April 19 because of a California ban on large scale gatherings. Organizers hope to reschedule the race, the second most prestigious on the IndyCar schedule behind the Indianapolis 500, for later this year.

Earlier, in Melbourne, Australia, the first Formula One Grand Prix of the season was canceled two hours before the first official practice was set to start.

The decision came after one team, McLaren, pulled out of the Australian GP when one of its team members tested positive for the coronavirus. Six-time world champion Lewis Hamilton had said he was shocked that organizers planned to proceed with the race, which regularly attracts more than 300,000 people, before it eventually was scrapped.

On Wednesday, President Donald Trump announced a ban affecting travel from Europe to the United States, prompting the IMSA sports car series to reschedule next weekend's 12 Hours of Sebring in Florida until November. Many drivers and team members come from Europe.

The NHRA also postponed a portion of the Gatornationals in Gainesville, Florida.