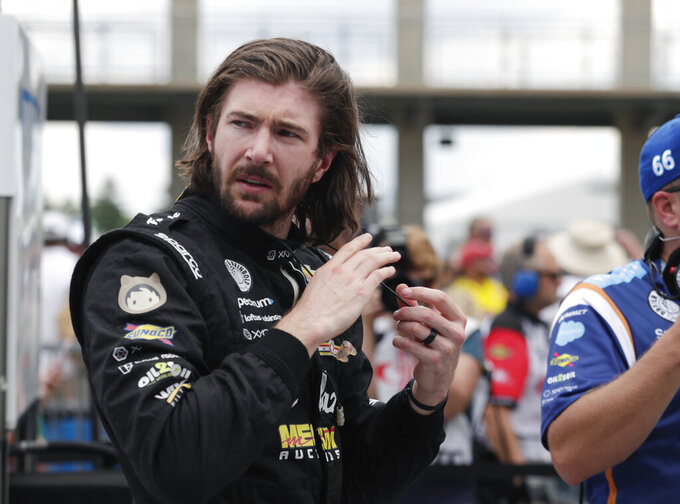 FILE - JR Hildebrand is shown in the pit area during qualifications for the IndyCar Indianapolis 500 auto race at Indianapolis Motor Speedway in Indianapolis, in this Saturday, May 19, 2018, file photo. Hildebrand has a new team and an old-fashioned look for this year's Indianapolis 500. On Thursday, April 8, 2021, A.J. Foyt Racing announced it had hired the California native to drive the No. 1 ABC Supply Chevrolet as the team's fourth driver in IndyCar's biggest race. (AP Photo/Michael Conroy, File)

This May, he'll celebrate the 60-year anniversary with a new driver, JR Hildebrand, and a throwback car.

Foyt's team announced Thursday the California native will drive the No. 1 ABC Supply Chevrolet, becoming the team's fourth driver attempting to qualify for the Indianapolis 500. And the candy apple red nose, trimmed with black stripes over a white body may look awfully familiar to longtime race fans because it's the same paint scheme Foyt had on his winning car in 1961.

“All the wins were great races but the first one is a special one that you can never replace,” said 86-year-old A.J. Foyt, one of three four-time race winners. ’“The first time you do what you’ve dreamed all your life, what else can you do?"

The No. 1 actually belongs to the defending series champion, New Zealand's Scott Dixon who drives for Chip Ganassi Racing.

But the team owner is lending the number to Foyt this May, making he throwback car possible and team officials thankful for Ganassi's help in honoring the first of Foyt's four wins.

Hildebrand's crew will honor the victory, too, by wearing uniforms modeled after the 1961 crew, headed by George Bignotti who helped steer a record seven cars to victory lane.

For the 33-year-old Hildebrand, it's also a big deal.

“The fact that I’ll be running a livery honoring A.J.’s first win 60 years ago is just an incredible thing to be a part of,” he said.

“I’ve tried to bring a little history into at least some element of my 500 gigs over the last few years — in ’18 we ran a 66 that was designed based on the car Jim Clark ran his lone NASCAR start with, in ’19 we ran Dan Gurney’s 48, and last year we designed the 67 on our car from the numbers that were on Joe Leonard and Graham Hill’s 1968 turbine cars — but this definitely takes it to a whole new level."

He will attempt to make an 11th consecutive 500 start alongside four-time series champion Sebastien Bourdais, Dalton Kellett and Charlie Kimball — his new teammates. Hildebrand drove for Dreyer & Reinbold Racing the past three years.

His best finish came as a rookie in 2011 when he lost the lead after crashing on the final turn of the race. His damaged car skidded across the yard of bricks in second place, behind the late Dan Wheldon.

“It really does bring a lot of memories back, especially when a lot of people said I wouldn’t live to be 22 years," Foyt said. “(Team president) Larry (Foyt) jumped at it, I jumped at it. I’m glad we just have a car and glad to see it run with No. 1 and in my colors.”