Hamilton on song in Monaco as he tops both practice sessions 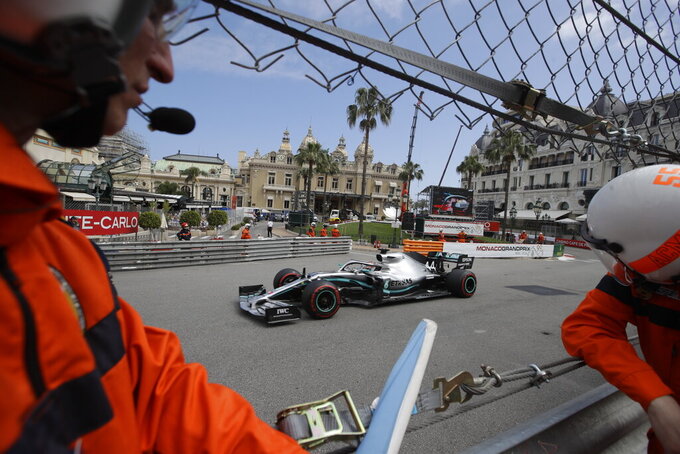 Mercedes driver Lewis Hamilton of Britain steers his car past the casino during the second practice session at the Monaco racetrack, in Monaco, Thursday, May 23, 2019. The Formula one race will be held on Sunday. (AP Photo/Luca Bruno) 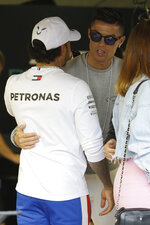 MONACO (AP) — A quick hug from another sporting great and then it was back to business for Formula One champion Lewis Hamilton at the Monaco Grand Prix.

Hamilton looked every bit the championship leader as he topped both practice sessions on Thursday.

Before going out for the second run in the afternoon, the five-time F1 champion hugged five-time Ballon d'Or winner Cristiano Ronaldo — who shares the record for winning soccer's prestigious award with Lionel Messi. This season, Hamilton has a good chance to move one behind Michael Schumacher's record of seven F1 titles.

In session two, Hamilton was .081 seconds faster than his Mercedes teammate Valtteri Bottas and .763 clear of Ferrari's Sebastian Vettel.

"It's a dream for every driver to come to Monaco and have a car that you can exploit and utilize your abilities with," said Hamilton, who has won Monaco twice before. "I'm really proud of the team. We made some small tweaks (between) the two sessions and during the sessions as well, but I've been quite happy with the set-up."

In the first practice, he was .059 seconds quicker than Red Bull driver Max Verstappen on the sinewy 3.3-kilometer (2-mile) street circuit. Bottas was third quickest in that outing and finished .072 behind Hamilton, who is chasing a sixth world title.

Ferrari had looked off the pace in P1 with Charles Leclerc fourth ahead of Vettel, and they were both fined for pit lane speeding.

Mercedes has placed 1-2 in all five races so far, with Bottas second in the championship standings. Verstappen is third overall, with Vettel fourth and Leclerc fifth.

Ferrari is under pressure to get a win in Monaco. The Italian manufacturer has not won a race since Kimi Raikkonen, who is now with Sauber, took the checkered flag at the United States GP last October. Vettel has not won in 13 races since victory at the Belgian GP on Aug. 26.

Monaco is the only race on the F1 calendar where practice starts on Thursday instead of on Friday, when there is no racing held at the Principality. There is a third and final practice Saturday ahead of qualifying.

Red Bull won the race last year with Daniel Ricciardo behind the wheel, and the winding nature of the track is well suited to its car because it negates the greater speed of Mercedes and Ferrari.

Verstappen thinks taking pole position on Saturday is unlikely this time, given the great consistency Mercedes has shown this season.

"I don't think we can fight them for pole," the Dutch driver said. "But there is a big gap between second and third which we should be able to fill in qualifying."