Gragson holds off Gibbs in thrilling Xfinity race at Pocono 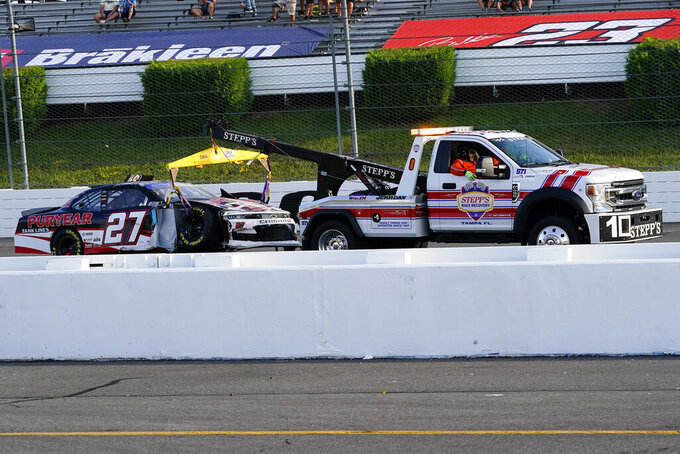 LONG POND, Pa. (AP) — Noah Gragson kept a hard-charging Ty Gibbs at bay down the stretch and held on to win his third Xfinity Series race of the season Saturday night at Pocono Raceway.

Gragson, linked to the vacant ride next season at Petty GMS Motorsports, bumped doors with Gibbs on the last lap and raced at the bottom of the track to pick up the win. Better yet, Gragson and Gibbs raced side-by-side for a clean, thrilling end in the wake of a feud that started last month at Portland International Raceway. Gragson vowed payback after Gibbs dumped him during the race.

“That was probably the best I’ve ever driven there,” Gragson said. “I’m working my (rear) off to keep the 54 back there. With 15 to go, I didn’t think we could hold him off. I’m exhausted.”

Gragson, who celebrated by climbing the fence, will make his eighth Cup start of the season Sunday.

Gibbs said he was determined over the final few miles to keep the race and blamed himself for making mistakes that cost him the win driving for his grandfather, Joe Gibbs.

“I just didn’t put it together,” said the 19-year-old Gibbs.

The red flag was thrown late in the race following a scary wreck that turned Jeb Burton’s No. 27 Chevrolet upside down and it skidded down the track. The 29-year-old Burton, his car launched in the air and slammed on the hood, walked away unscathed.

“Man, that was not good,” Burton said. “Just appreciate the safety crew. They got to me fast.”

Keeping his cool in the television booth as he explained the wreck: Burton’s uncle, retired NASCAR driver Jeff Burton. Ricky Stenhouse Jr., Santino Ferrucci and Ronnie Bassett Jr., were also collected in the crash and knocked out of the race.

Sage Karam finished 20th in his first NASCAR race at the track and first time racing at the track since he triggered a wreck in a 2015 IndyCar race that killed IndyCar driver Justin Wilson. The 27-year-old Karam took a bike ride around the track this week, a necessary step to reflect on his own, challenging journey. He tweeted his thanks to the “racing community for all the positive vibes this week.”

Karam said he was still “stressed” and struggled with his decision in the days leading up to the race.

"Lot more pressure coming into this one that I put on myself than any other race, for sure,” Karam said. “I’m just happy to be leaving here today with a good memory and rewriting the book a little bit, I guess. It’s a new chapter for my experiences here at Pocono.”