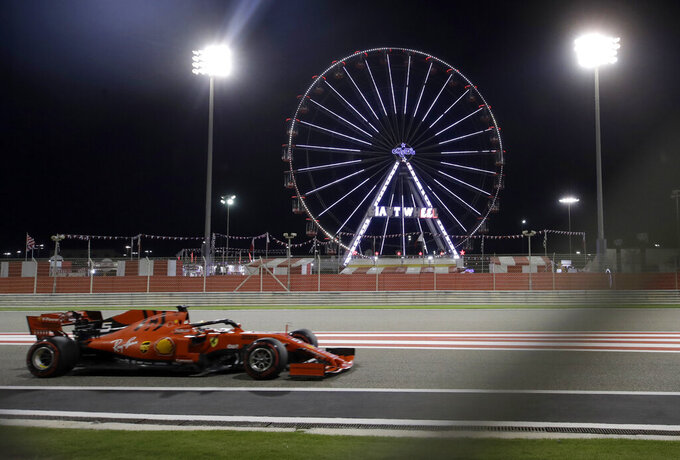 Ferrari driver Sebastian Vettel of Germany steers his car during the second free practice at the Formula One Bahrain International Circuit in Sakhir, Bahrain, Friday, March 29, 2019. The Bahrain Formula One Grand Prix will take place on Sunday. (AP Photo/Luca Bruno)

After Leclerc finished about 0.3 seconds ahead of Vettel in the hot afternoon sun, Vettel was then only 0.035 clear of Leclerc when temperatures dropped considerably on the desert circuit in the cooler evening session.

Vettel was more than half a second ahead of world champion Lewis Hamilton's Mercedes under the floodlights, which appears to give Ferrari some encouragement after neither driver managed to get on the podium at the season-opening Australian GP two weeks ago.

"The Ferraris have been quick from the get-go and picked up more pace from there. So it's completely different to what we've seen in Melbourne," Hamilton said. "We had some issues with the balance of the car. At the moment it looks like the Ferraris are ahead."

Leclerc is in his first season with Ferrari and placed nearly one second ahead of Valtteri Bottas — Hamilton's teammate at Mercedes — in the first practice.

"It looks like it's going to be very close between us and Ferrari," Bottas said. "They are clearly faster around here than they were in Melbourne."

However, different weather conditions for the sessions make it hard to properly gauge the true level of Ferrari's performance, on a track which is more abrasive than Australia's circuit, and offers greater possibilities for overtaking in Sunday's race. Qualifying is therefore less important than it was in Melbourne, where Mercedes qualified 1-2.

Vettel drove without problem until 20 minutes before the end of the evening stint — which started at 6 p.m. to mirror Sunday's race conditions — when he lost control of the rear of his car and spun off the track. The four-time F1 champion was able to continue moments later.

Saturday's qualifying also begins at 6 p.m. and follows a third and final practice in the afternoon.

Mercedes finished third and fourth in both practices, with Bottas quicker than Hamilton in P1 and Hamilton faster in P2.

Bottas won the Australian GP ahead of Hamilton . In that race, Vettel placed fourth with Leclerc fifth in a hugely disappointing performance from Ferrari following the Italian constructors' strong showing during preseason testing in Spain.

Friday afternoon's track temperatures in Bahrain were well over 40 degrees Celsius (104 F) and not reflective of the race conditions. Therefore, drivers did not push their cars to avoid damage from overheating. They are also likely to conserve power in P3 ahead of qualifying.

It was a day to forget for Alfa Romeo, which uses Ferrari engines.

Raikkonen, who joined from Ferrari this season, was only 16th in P2 and spun his car early on while his teammate Antonio Giovinazzi fared worse in 18th.

There was an incident near the end of P1 when the nervous-looking Italian driver Giovinazzi tried to maneuver past Hulkenberg's Renault and bumped his front left wheel into the German's car. Both drivers were summoned before race stewards but no further action was taken.

Also, Mick Schumacher made a quiet start to his F2 career with Prema racing.

The 20-year-old son of seven-time F1 champion Michael Schumacher was 12th in practice and 10th in qualifying.

His father holds the record for most F1 titles and most wins with 91, although five-time F1 champion Hamilton is second with 73 and has one more season left on his current Mercedes contract.