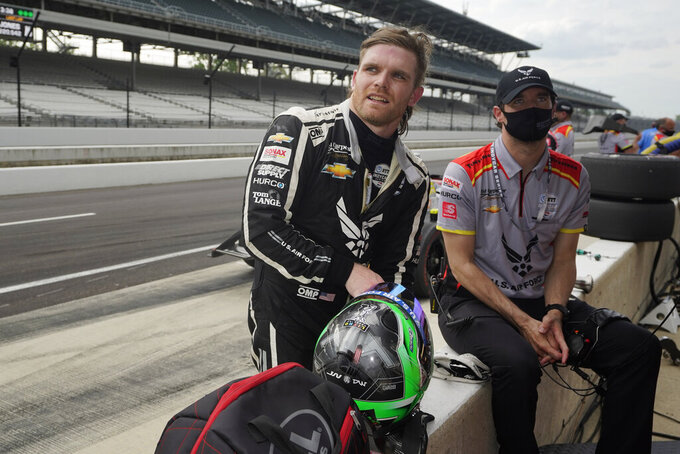 Conor Daly talks with his crew during practice for the Indianapolis 500 auto race at Indianapolis Motor Speedway, Wednesday, May 19, 2021, in Indianapolis. (AP Photo/Darron Cummings)

INDIANAPOLIS (AP) — Ed Carpenter Racing, fresh off its first victory since 2016, brought fast cars to Indianapolis Motor Speedway with every intention of completing a sweep in its own backyard.

Six-time IndyCar Series champion Scott Dixon was fastest Wednesday on the second day of Indianapolis 500 practice, but he was followed closely by the American combo of Conor Daly and Ed Carpenter.

Both are from Indianapolis with deep ties to the speedway and ECR has been known to raise its game for the Indy 500. Team owner Carpenter, the stepson of former track owner Tony George, is a three-time Indy 500 pole-winner. He finished second in 2018, when he started from the pole and led a race-high 65 laps.

Daly, the stepson of track president Doug Boles, is back with ECR for a second consecutive season in the 500 and looking to put together a full race. Daly's best career finish was 10th in 2019.

But the team got a boost last weekend when Rinus Veekay won on the road course at Indianapolis, the first career IndyCar Series victory for the 20-year-old Dutchman. He's one of three first-time winners through five races this season — four of the winners are aged 24 or younger.

“Anytime you win a race, and it is so hard to win races in this series, so anytime a driver, a car on your team wins a race, I think it does boost everyone up,” Carpenter said. “You know, you don't get to celebrate the Indy GP as long as you do some of the other races because we're just turning the page and getting ready for the 500. But it makes it easier for the guys that come into work excited about spending most of the month out here.”

Dixon paced the session at 226.829 mph with Honda power from Chip Ganassi Racing.

Daly was second at 226.372 and followed by Carpenter at 226.103 in their Chevrolet-powered entries. Veekay, who crashed during an open test at Indy last month and broke his finger, was 11th on the final speed chart.

It was the Ganassi group that was most consistent as leader Dixon was followed by teammate Marcus Ericsson, who sat atop the speed chart most of Wednesday before fading to fourth. Former Indy 500 winner Tony Kanaan was fifth fastest and Alex Palou, another one of IndyCar's first-time winners this season, was eighth.

Dixon wasn't sure how indicative Wednesday practice was of where teams actually stand right now. There are two more full days of practice before qualifying begins Saturday and the pole is determined Sunday.

“I think as most will say, the big times don’t really mean much. You just kind of get a bit lucky and throw them up, but I think our cars definitely have good speed,” Dixon said. “At least being able to get speed out of the car is always kind of nice. We’ve got a long list of stuff to work through.”

It's been slow going for rookie R.C. Enerson, who didn't complete his rookie orientation program on Tuesday and needed extra track time Wednesday to get his Top Gun Racing entry approved. By the time the team finished adjustments on the car it was "Happy Hour" and Top Gun decided not to send Enerson on track for the final hour of practice.

He will get his first practice time Thursday.