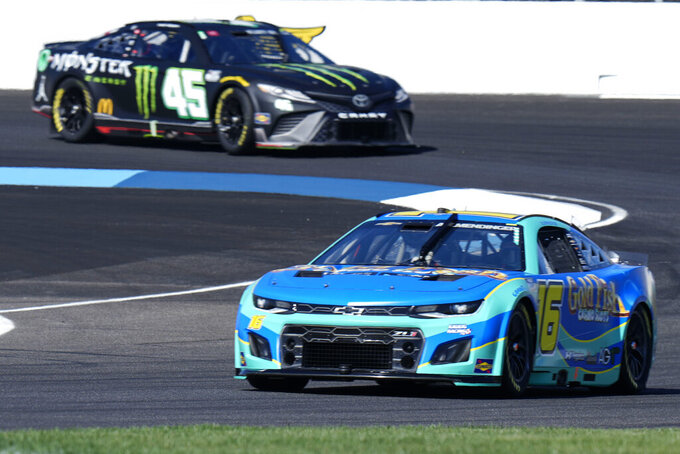 After being relegated to reserve driver for last year's Formula One season, he watched helplessly as his team withdrew from the world endurance series in March when the governing body imposed sanctions against Russians because of their country's invasion of Ukraine.

On Sunday, the ,28-year-old with three F1 podium finishes will finally take the green flag — as the first Russian to start a Cup race. He'll start 36th alongside Erik Jones on Indy's 14-turn, 2.439-mile road course.

“I was very excited to get in the car here," a relieved Kvyat said Saturday. "For me, it was like when the car started, ‘I was like, yes, we're going on track. Finally, we're going racing.' Yes, this is really cool, so yeah, very, very excited.”

Kvyat last competed at Abu Dhabi in mid-December 2020. He finished 13th in the race and 14th in points during the COVID-19-shortened season, posting seven top-10 results in 17 starts.

It wasn't enough to convince AlphaTauri to re-sign Kvyat and he settled for a second-tier job with the European-based Alpine Team.

Now, like other former F1 drivers, Kvyat seems to have found a new home on American soil.

He thanked NASCAR for opening its arms after he was spurned by FIA, and he hopes to follow in the footsteps of other international drivers who have made successful transitions from Europe.

Kvyat might not be at that level yet. But he's paired with Loris Hezemans, a 25-year-old Dutchman, on Team Hezeberg. Hezemans qualified 34th for the first European-based Cup team.

And Kvyat has already recognized some of the distinct challenges American racers face.

“In Formula One, it's a bit different. The sponsors, they choose you and they pay you — I always get paid," he said. “Here, you have to acquire your own people and I'm ready to acquire more people behind me."

Kvyat's team would appreciate a schedule expansion courtesy of additional sponsorship money. IndyCars could be an option, too.

But, for now, Kvyat is content with competing in as many races as possible this season, finding a full-time ride in the future and avoiding any more long layoffs.