Column: Rossi ends season with a win, eyes on IndyCar 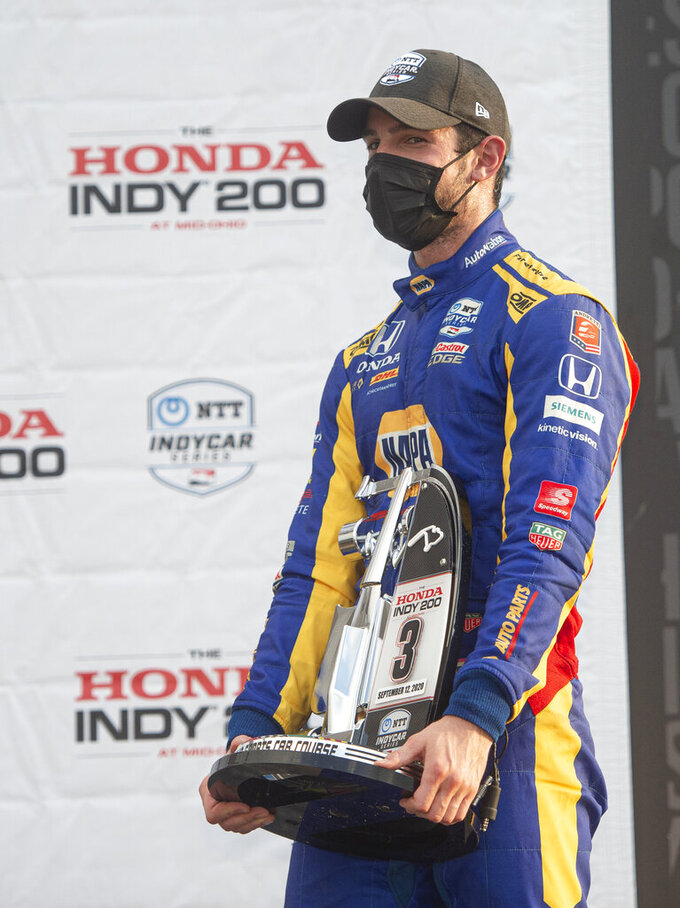 FILE - Third place finisher Alexander Rossi poses after the IndyCar Series auto race at Mid-Ohio Sports Car Course, Saturday, Sept. 12, 2020, in Lexington, Ohio. Rossi closed out his 2021 racing season with a class victory in the off-road Baja 1000 to bookend his year with big wins. But his eyes are on the upcoming IndyCar season and the final year of his contract with Andretti Autosport. Rossi has not won an IndyCar race since 2019. (AP Photo/Phil Long, File)

Alexander Rossi white-knuckled a Honda Ridgeline through the dark and the fog, off-roading along Mexico's Baja California Peninsula at 100 mph. Insanity, it sounds like, especially for a driver who already had a pair of close calls in both of his previous appearances in the Baja 100.

Rossi nearly had a head-on collision with an SUV and still finished second in his 2018 debut in the prestigious off-road adventure. The next year, Rossi botched a 90-degree turn and rolled his truck into a ditch.

Yet there he was last week, trusting a navigator and the GPS system to get him over bumps and jumps in the dark of night while also avoiding spectators camped along the route. At sunrise, Rossi's clear visor for night driving was worthless and he raced the next 80 miles with one hand shielding his eyes from the light.

The payoff was worth it: Rossi's team won its class by more than three hours in a race that spanned more than 23 hours and stretched 1,226-miles from Ensenada to La Paz.

“My main motivation was, you know, I crashed in 2019, rolled off a cliff. It was a big hit. It was a big scare for my navigator and my co-driver and it shook us up a little bit,” Rossi said in a phone interview with The Associated Press.

“I didn't want to go out, end my time at Baja, on that kind of note. It was really important to get back on the horse.”

The Baja win gave Rossi victories to bookend 2021. He opened the year on the winning Rolex 24 at Daytona sports car team and closed it at Baja with a class win in one of the most prestigious off-road races in the world — one Rossi argued is “the most dangerous thing you can do in motorsports.”

Rossi, the 2016 winner of the 100th running of the Indianapolis 500, now has a trio of trophies from three of North America's most prestigious races. A week before Baja, he was part of the Wayne Taylor Racing sports car team that lost the IMSA championship in a battle that came down to the final turn of a 10-hour race.

Not a bad way for Rossi to close the season as he heads into the final year of his current IndyCar contract at Andretti Autosport. The team has been overhauled ahead of 2022 — Romain Grosjean and rookie Devlin De Francesco replaced Andretti stalwarts Ryan Hunter-Reay and James Hinchcliffe — and Rossi said his No. 27 team is actively hiring because he's already lost three mechanics this offseason and he might lose a fourth.

Rossi has a 37-race IndyCar losing streak dating to 2019. But he believes he was about even at the end of this season with teammate Colton Herta, who won three races, including the last two of the year.

Rossi is 30 years old in a series undergoing a serious age reduction, and he was 10th in the standings this year and never challenged in the championship race. He led only two laps and scored just one podium, and his ninth-place finish the year before wasn't much better.

He got to victory lane this year via his extracurricular racing, which is still valuable currency.

“I think people realize, ‘Oh yeah, you haven’t forgotten how to drive,' so that's a positive thing,” Rossi said. “And it helps you to stay relevant because if you have a tough year, and then you're silent for five to six months, people don't have anything else to remember you by but having a tough year.”

He is exhausted from back-to-back endurance races and right now has both eyes only on IndyCar. Rossi is planning to return to the Rolex in January but won't run IMSA's four-race endurance schedule because IndyCar races at Texas the same weekend the sports cars run the Twelve Hours of Sebring. Rossi said Andretti needs to improve on ovals and Texas is too important to commute back and forth for both races.

Michael Andretti holds the rights on an exclusive period of negotiations with Rossi, who declined to reveal the deadline. He plans to explore the free agent market.

“I'm just talking to Michael and everything is revolving around Andretti Autosport at the moment,” Rossi said. “But I'm certainly not going to commit to anything until I talk to other people. I don't know where any of that lies. People might not care that it's a contract year.”

That could even be true of Andretti, who let development driver Kyle Kirkwood leave following his Indy Lights championship because he doesn't have an open IndyCar seat. Kirkwood instead signed a one-year contract with A.J. Foyt Racing, and a Rossi departure could be Kirkwood's opening at Andretti.

Rossi understands that he needs to be good out of the gate when the season begins February in St. Petersburg, Florida.

“You're as good as your last race in IndyCar, and my last race I was sixth. That's not great," Rossi said. "We've got to go into St. Pete and there's no ifs, ands or buts, we just have to execute. All the pieces of the puzzle are there and Colton and I should be in contention at the end of the year, each year, and neither of us have been.

“But it's silly that a team that puts in that amount of effort, and has the talent from an engineering standpoint and the driver standpoint, and it's in the conversation when it comes to the final race. That's just not acceptable from anyone's standpoint.”