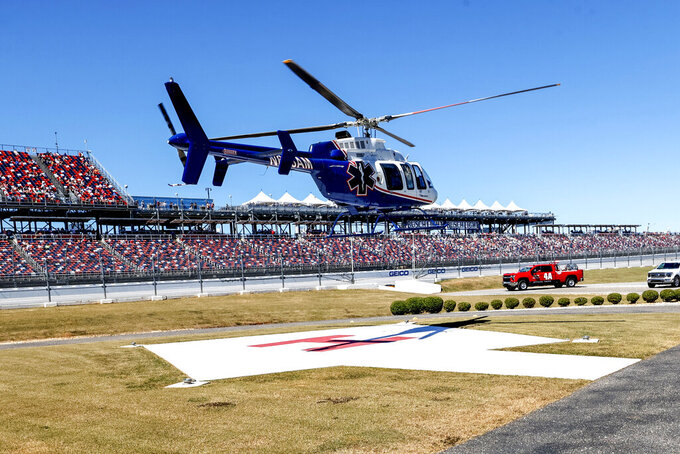 Driver Jordan Anderson airlifted by a helicopter to a local hospital after a fiery crash during the NASCAR Trucks Chevrolet Silverado 250 auto race, Saturday, Oct. 1, 2022, in Talladega, Ala. (AP Photo/Butch Dill)

TALLADEGA, Ala. (AP) — NASCAR driver Jordan Anderson suffered second-degree burns across his neck, face, right arm and both knees as he desperately jumped from his burning vehicle Saturday at Talladega Superspeedway.

The 31-year-old journeyman was running fourth in the Truck Series race on Saturday when his truck spun across the track and flames began shooting from underneath the Chevrolet. The truck continued to spin and slide toward an interior wall and Anderson appeared to be halfway out of the window when it came to a rest aligned with the wall.

Anderson scrambled to the top of the wall and away from the flames. He was initially seen in the infield care center and then airlifted to a Birmingham hospital.

It was the fifth start of the season for Anderson, who posted on social media he expected to be released from the hospital later Saturday.

“Scariest moment of my racing career by far,” Anderson wrote. “Doctors say everything should be healing up within a few weeks.”