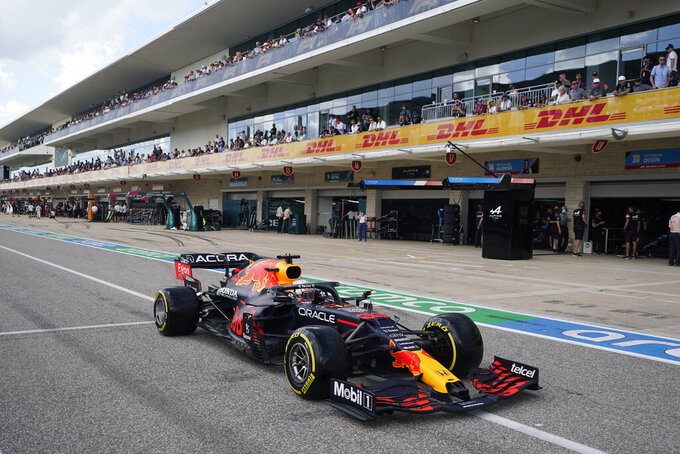 Red Bull driver Max Verstappen, of the Netherlands, leaves the pits during qualifications for the F1 U.S. Grand Prix auto race at the Circuit of the Americas, Saturday, Oct. 23, 2021, in Austin, Texas. (AP Photo/Darron Cummings, Pool)

The U.S Grand Prix has played a role in this tense title battle between Max Verstappen and Lewis Hamilton with the championship rivals nipping at each other all weekend. The race is on Sunday but the two have done their part in F1's much-hyped return to America.

The series is booming in the United States and a sold-out crowd of an expected 140,000 at the Circuit of the Americas will see points leader Verstappen lead his Red Bull at the start. He'll be alongside seven-time champion Hamilton driving for a Mercedes team that has dominated this Texas course.

The two have gone back-and-forth since Friday practice when Verstappen flipped his middle finger at Hamilton in practice and called the five-time COTA winner a “stupid idiot.” Then Verstappen nipped Hamilton on Saturday's last lap of qualifying by a whisper .209 seconds to snatch the pole.

So it will be the 24-year-old Dutchman out front at the start on Sunday at a track where Hamilton has dominated practically since the day it opened.

This race is important in the title fight because Mercedes has historically done so well. So Verstappen and Red Bull need to capitalize in Texas because Verstappen holds just a six-point lead in the standings with six races remaining.

The lead has seesawed several times this season as Verstappen tries to hang on in his chase of his first F1 championship. Hamilton is seeking a record eighth title, but this is his toughest challenge in years.

It sets up a potentially explosive start in front a massive sold-out crowd that should be among the largest for a U.S. sporting event since the start of the pandemic.

“We've had a lot of good races this season,” Verstappen said, downplaying the nip-and-tuck nature of the season and the simmering tension in the title fight. “We're all looking for another one.”

Everyone will be watching the start.

Verstappen will start in front, but Hamilton will have the inside line to the first turn, an 130-foot, uphill lefthanded switchback that sends the cars shooting back down hill. It may be one of the most treacherous first corners in the F1 season.

And given their history of race-changing collisions already this season — they’ve wrecked twice during a race and on Friday in practice Verstappen was openly aggravated by Hamilton - the fight for the lead should be fierce.

“I don’t see why you always have to bring this up,” Verstappen said of the previous wrecks. “Everyone has touched in this sport. These things happen.

"We are on the front row again. We just want to have a really good race.”

Hamilton acknowledged the trickiness of the first corner. Since the track opened in 2012, the winner has come from the front row every time.

“I hope to make it through turn one and get a good race," Hamilton said. "Ï don't think it's all decided on turn one."

Hamilton has won the U.S. Grand Prix in Austin five times and the Mercedes team was supposed to have the edge over Red Bull at this event. But it was Verstappen and fan favorite Sergio Perez who dominated qualifying and the Red Bulls flanked Hamilton headed into Sunday’s race.

“Bit by bit, they got faster,” over practice and qualifying," Hamilton said. “I don’t know if we got slower.”

Perez even briefly held pole position and drew the biggest cheers from the crowd of more than 100,000. He seemed disappointed to lose out on the front row.

“I thought it might be my day,” Perez said.

Hamilton's Mercedes teammate Valtteri Bottas was fourth, but will start ninth because of a penalty for making engine change. That leaves Hamilton to fight the Red Bulls up front by himself.

The seven-time champion seemed unfazed by that prospect. He's been energized by the roars of the crowd, even if the fans seemed to favor Red Bull's Verstappen and Perez, racing at his second home track.

Hamilton raved about the atmosphere in Austin.

“This is one of the best races of the year, and its simply because of that city and crowd that we get here, the Americans and Mexicans that come over, you get that crazy buzz,” Hamilton said. "I hope we can give them a good race."