US driver Logan Sargeant set to race in F1 in 2023 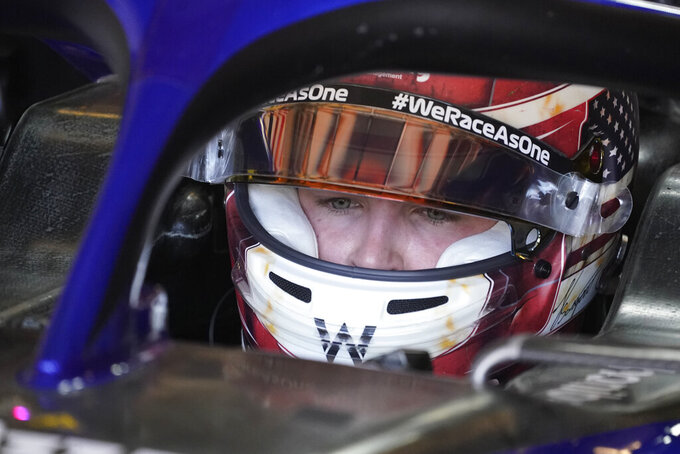 Williams test driver Logan Sargeant sits in his car during the first practice session for the Formula One U.S. Grand Prix auto race at Circuit of the Americas, Friday, Oct. 21, 2022, in Austin, Texas. (AP Photo/Darron Cummings)

ABU DHABI, United Arab Emirates (AP) — Logan Sargeant earned the Super License he needed to race for Williams in Formula One and will become the first American on the grid since 2015 when he makes his debut next season.

Sargeant needed to finish at least sixth in the season standings in Formula Two to qualify for an F1 Super License. Williams earlier said the Florida-born driver would get the seat for 2023 if he met the requirements and helped him do so by giving him practice time in F1 sessions.

Sargeant finished fourth in the F2 standings after a fifth-place result in the last race of the season Sunday.

“Thank you all for your hard work and efforts this year. We were damn quick, so thank you for everything," Sargeant told his team. Sargeant was named Rookie of the Year in F2 and was congratulated by Williams for “a great job" in a Twitter post.

Sargeant had unexpected help during the race when Jack Doohan, one of the drivers who could have overtaken him in the standings, came into the pits from the lead and lost a wheel on the pit exit. Japan's Ayumu Iwasa took the win Sunday ahead of F2 champion Felipe Drugovich, a reserve in F1 for Aston Martin.

At Williams, Sargeant takes over a race seat occupied this year by Canada's Nicholas Latifi. His teammate will be British-born Thai driver Alex Albon.

The most recent U.S. driver in F1 was Alexander Rossi, who started five races for the now-defunct Manor Marussia team. Since then, the popularity of F1 in the United States has soared as a new audience flocked to the sport thanks to the Neftlix documentary series “Drive to Survive.” The U.S. will host three of the 24 races on next season's calendar as Las Vegas joins existing events in Miami and Austin, Texas.

Another American, IndyCar star Colton Herta, was considered for a seat in F1 for 2023 with the AlphaTauri team but was refused a license. The points system used to determine who is eligible favors FIA-sanctioned series like F2 over others like IndyCar. Rossi was among those who supported Herta, saying it was clear he had the talent to compete in F1.