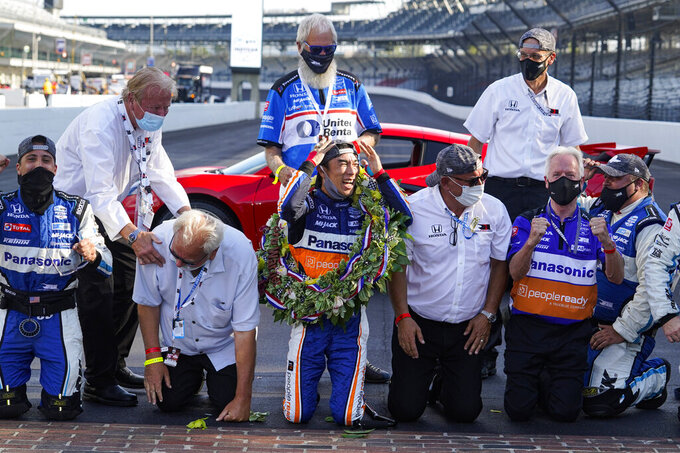 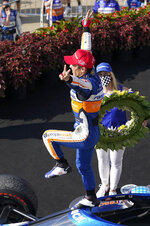 INDIANAPOLIS (AP) — At an eerily empty Indianapolis Motor Speedway, Takuma Sato snatched a second Indianapolis 500 victory in an odd and unsatisfying finish to “The Greatest Spectacle in Racing.”

Sato held off Scott Dixon and won under caution after teammate Spencer Pigot crashed with five laps remaining in Sunday's race, held in front of empty grandstands for the first time in 104 runnings because of the pandemic.

Pigot needed medical attention on the track, the crash scene was a massive debris field and the cleanup time would have been lengthy. There were also just four laps left in the race, not enough time to allow for a proper restart.

If it had been a NASCAR race, a stoppage would have been immediate to set up a final shootout. IndyCar tends to avoid gimmicks and a late red-flag in the 2014 Indy 500 incensed purists.

Dixon, the five-time IndyCar champion who had dominated the race, asked on his radio if IndyCar was going to give the drivers a final shootout.

“Are they going red?” Dixon asked. “They’ve got to go red. There’s no way they can clean that up.”

The answer was no, turning the end of the race into a game of what-ifs.

“It is a little silly to predict what might have happened. The reality is Takuma won,” said winning car owner Bobby Rahal. “This isn't the first 500 to be flagged under yellow and there was a hell of a mess out there.”

IndyCar said in a statement after the finish "there were too few laps remaining to gather the field behind the pace car, issue a red flag and then restart for a green-flag finish.”

Dixon was visibly disappointed after leading 111 of the 200 laps in pursuit of his own second Indy win.

“Definitely a hard one to swallow for sure. We had such a great day,” Dixon said. “First time I’ve seen them let it run out like that. I thought they’d throw a red.”

Dixon had figured he would ultimately run down Sato as Sato worked through lapped traffic, and he believed Sato's team was cutting it close on fuel. Rahal said his driver had enough gas to get to the end.

None of it mattered in the end as Sato was able to coast around the speedway then ride the lift new track owner Roger Penske installed to take the winner to an elevated victory circle. Along for the ride were Rahal, the 1986 Indy 500 winner, and David Letterman, his mask buried in an unruly gray beard as the longtime comedian and TV host greeted Sato.

Sato became the first Japanese winner of the Indy 500 in 2017. Graham Rahal, Sato’s teammate at Rahal Letterman Lanigan Racing, was third behind Dixon.

Sato knew Dixon was going to be tough to beat under green.

“I know Scott was coming right through, out of turn four, he was screaming coming,” Sato said. “I had to hold him off.”

The celebration was somewhat muted as the RLL team had a socially distanced winner's circle. Penske was forced to host his first 500 as owner of the iconic speedway without fans and it made the largest venue in the world was still. The speedway typically draws more than 300,000 spectators on race day; Penske said there would be only 2,500 in attendance Sunday.

“It's not a happy place,” Sato said. “It’s tough on everyone, not only for us. It was just fortunate, so fortunate, to be able to perform as a sport, be able to show millions of people watching TV today at home, get some energy on it.”

Sato did not get the traditional ride around the speedway in the back of a convertible, being interviewed over the public address system with the crowd cheering the winner. He briefly removed his mask to kiss the yard of bricks; when the entire RLL team lined up for the smooch, the group did it wearing masks.

“It's eerie. It's weird. Nobody likes it,” said Rahal. “I feel bad. I hope our fans who watched it on TV really enjoyed the race. I know its not the same thing as being there, but I think everybody understands the situation.”

It was Pigot, the third Rahal driver, whose crash set up the controversial finish. His nasty hit destroyed his car and he was prone on the track being treated before he was taken to a hospital for further examination. IndyCar said he was awake and alert.

Reigning series champion Josef Newgarden was fifth, the highest-finishing Chevrolet driver and best of the four-car Team Penske group. Chevrolet lagged behind Honda in speed the entire buildup to the 500 and had just one driver start in the front nine.

No one did, really, as Dixon seemed to have it under control after casually passing pole-sitter Marco Andretti in the first turn of the first lap and pulling away. Andretti was seeking to end the 51-year losing streak for his famous family and had a shot with the first Andretti pole in 33 years. After Dixon took command, Andretti slid back into the field and ultimately finished 13th.

“We had high hopes coming into the race ... but we didn’t have it," Andretti said. "We didn’t have the pickup we needed on the restarts, that left us a sitting duck and we weren’t able to gain ground on pit stops to make up for anything. Everything combined left us 13th.”

Fernando Alonso, attempting to win the final leg of motorsports' version of the Triple Crown, was 21st and never contended. This was his third attempt at winning Indy and the two-time Formula One champion is returning to that series in 2021.

“We didn’t have one lap of kindness,” Alonso said. “I’m happy to finish the race, cross the line and have one 500 miles in the pocket. We tried to race but luck was not with us.”