Sanctions swing toward Putin himself as Ukraine anger grows 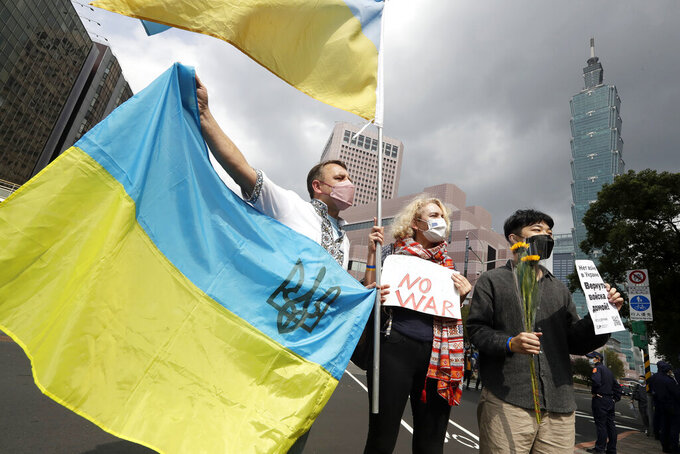 A group of Ukrainian people in Taiwan and supporters hold posters and Ukraine National Flag to protest against the invasion of Russia in solidarity with the Ukrainian people in front of the Representative Office of the Moscow-Taipei Coordination Commission in Taipei, Taiwan, Saturday, Feb. 26, 2022. (AP Photo/Chiang Ying-ying)

KYIV, Ukraine (AP) — Russian President Vladimir Putin is the latest target of sanctions over the invasion of Ukraine, with the United States, Canada and European allies announcing they are adding direct measures against him and his foreign minister. Russia warned that relations with the West were reaching a “point of no return.”

With Russian forces on the outskirts of Ukraine’s capital on Saturday, diplomatic appeals appeared to come second to imposing financial pain on Russia as global condemnation — and frustration — grew.

"This war will last, and all the crises that go with it will have durable consequences,” French President Emmanuel Macron said. Acknowledging the same, the Czech Republic’s government approved a plan to send more arms to Ukraine.

Asked if U.S. President Joe Biden has planned any more direct diplomatic overtures toward Putin, White House press secretary Jen Psaki on Friday told reporters he hadn't, but "it does not mean we have ruled out diplomacy forever.”

Psaki said the U.S. would also newly sanction the Russian Direct Investment Fund, which functions as a sovereign wealth fund meant to draw capital into the Russian economy. The U.S. and European allies earlier announced sweeping asset freezes and other penalties against Russia’s banks, state-owned enterprises and elites.

The U.S. measures block Putin and Lavrov, whom the Treasury Department’s formal announcement of the sanctions described as Putin’s “chief propagandist,” from access to any assets within reach of U.S. officials, and bar anyone in the United States from doing business with them. Members of Russia’s security council also were sanctioned.

The sanctions to be imposed would not ban contact between, for example, Putin and Biden, or U.S. Secretary of State Antony Blinken and Lavrov. It was unclear what the practical impact on Putin and Lavrov would be and how important their assets in Europe were.

Russia's relations with the West are reaching “a point of no return,” the country's Foreign Ministry spokeswoman, Maria Zakharova, warned Friday in comments carried by state media.

Russia has imposed its own tit-for-tat measures, banning British flights to and over its territory in retaliation to a similar U.K. ban on Aeroflot flights. Russian authorities announced the “partial restriction” of access to Facebook after the social media network limited the accounts of several Kremlin-backed media.

Russia also vetoed a U.N. Security Council resolution demanding that Moscow stop its attack on Ukraine and withdraw all troops.

The international measures against Russia have included an extraordinary visit by Pope Francis to the Russian Embassy to “express his concern about the war,” according to the Vatican.

In the sports world, the UEFA Champions League final — the Super Bowl of European soccer — was stripped from St. Petersburg. Formula One dropped this season’s Russian Grand Prix. The Polish Football Association said it will not play its World Cup qualifying match against Russia.

And in pop culture, the wildly popular Eurovision song contest banned Russia from the May finals in Italy.

Countries in Asia and the Pacific have joined the U.S., the EU and others in sanctioning Russian banks and leading companies and setting up export controls aimed at starving Russia’s industries and military of semiconductors and other high-tech products.

Japan and South Korea on Saturday said their foreign ministers had spoken with Blinken. But Japanese Foreign Minister Yoshimasa Hayashi declined to say whether Japan plans to impose sanctions on Putin or Lavrov. South Korea’s foreign ministry said Blinken thanked South Korea over its willingness to participate in international sanctions against Russia, without details.

But China, the only friend that might help Russia blunt the impact of sanctions, has continued to denounce sanctions and blamed the U.S. and its allies for provoking Moscow. Beijing, worried about American power in Asia, has increasingly aligned its foreign policy with Russia to challenge the West.