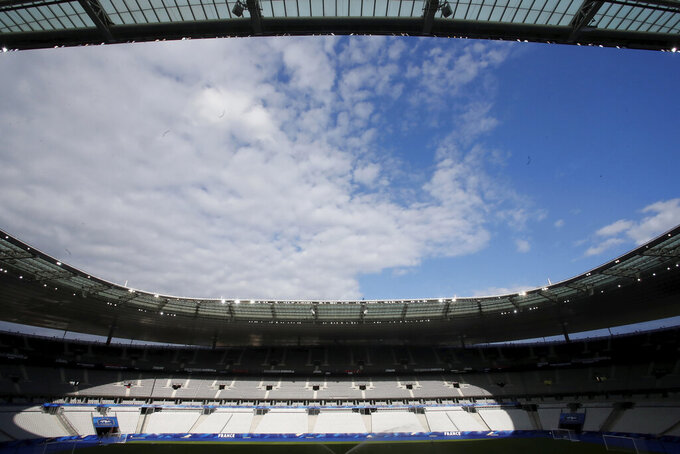 FILE - General view inside the Stade de France stadium before a training session ahead of the UEFA Nations League soccer match between France and Croatia at the Stade de France stadium in Saint Denis, north of Paris, Sunday Sept. 6, 2020. Russia has been stripped of hosting the Champions League final by UEFA with St. Petersburg replaced by Paris after Russia's invasion of Ukraine. The men's final will still be held on May 28 but now at the 80,000-seat Stade de France after the decision by UEFA's executive committee. (Christian Hartmann/Pool image via AP, File)

LONDON (AP) — The invasion of Ukraine drew more punitive measures across the sporting world on Friday when Russia was stripped of the Champions League final in St. Petersburg and Formula One dropped the Russian Grand Prix in Sochi.

The International Olympic Committee also urged sports federations to move their events out of Russia or Belarus, which Moscow is using as a staging ground for its troops moving into Ukraine from the north.

The IOC statement signaled an ostracising of President Vladimir Putin, who has lavishly funded sports events and was still courted by IOC President Thomas Bach and FIFA President Gianni Infantino despite the country corrupting sport with state-sponsored doping schemes in the last decade.

But the backlash against the embrace of Russian state-owned companies as sponsors in sports has seen Manchester United drop Aeroflot's commercial deal. The English Premier League giant cited “events in Ukraine” after the airline was banned in Britain as part of sanctions against Putin’s regime.

While UEFA is still working on cutting Gazprom as a Champions League sponsor, the final will no longer be staged at the St. Petersburg stadium named after the Russian state-owned energy firm. The climax to the European men's football season will still be in Paris, still on May 28, but at the 80,000-seat Stade de France.

It followed discussions led by UEFA President Aleksander Ceferin that involved the European Commission and French President Emmanuel Macron in recent days after concerns were raised about the status of Russia retaining such a prestigious event after its aggression toward another European country.

UEFA thanked Macron for his “personal support and commitment to have European club football’s most prestigious game moved to France at a time of unparalleled crisis.”

The move came as Russian bombs and troops pounded Ukraine during the invasion’s first full day, and world leaders on Friday began to fine-tune a response meant to punish the Russian economy and its leaders, including Putin’s inner circle.

The IOC had already condemned Russia for breaching the Olympic Truce, days after the end of the Beijing Winter Games and ahead of the Paralympics.

Now the IOC is asking events not subject to the WADA doping sanctions to no longer display the Russian or Belarusian national flags or play their anthems.

The F1 race wasn't due until September in the Black Sea resort of Sochi but the motorsport series leadership decided it would be “impossible” to stage the grand prix after talks with teams and the FIA governing body. American team Haas also dropped the sponsorship of Russian company Uralkali during preseason testing in Barcelona. Nikita Mazepin of Haas is the only Russian driver on the F1 grid this season.

“We are watching the developments in Ukraine with sadness and shock and hope for a swift and peaceful resolution to the present situation,” F1 said in a statement.

Sochi and St. Petersburg stand to lose tens of millions of dollars in losing out on hosting the Champions League final and the Russian GP, respectively. Champions League finals can generate more than $50 million for host cities. There’s also the non-monetary value of staging big events, including a lift to tourism, more jobs and better visibility and image on the worldwide stage.

There is the unresolved matter of Russia still being due to host Poland in World Cup soccer qualifying playoff semifinals in Moscow. Poland wants the game taken out of Russia, but FIFA has yet to decide.

UEFA is also working with the French government on helping to rescue footballers and their families from Ukraine.

UEFA has two weeks before the next set of Champions League games to resolve the issue of Gazprom adverts flashing around stadium pitches. Reinforcing the company's close links to UEFA, Dyukov is a CEO of a Gazprom subsidiary as well as sitting on European football's top decision-making body.

Gazprom's logo has already been removed this week from the jerseys of German club Schalke but it remains a sponsor.

Away from soccer, the International Ski Federation announced Russia will not host any more of its World Cup events this winter. The decision came after a farcical attempt to hold ski cross races on Friday in the Urals resort of Sunny Valley one day after Russia started an invasion of Ukraine.

Only a handful of Russians started and dozens of racers from all other countries did not take part. FIS cited ”the safety of all participants and to maintain the integrity of the World Cup” for calling off five scheduled events in the next month. Replacement venues are being sought.

The European curling championships scheduled to be held in November in Perm, Russia, will also be relocated, the sport’s international governing body announced on Friday after an emergency meeting of its board.