Johnson prepared to race at Long Beach with broken hand 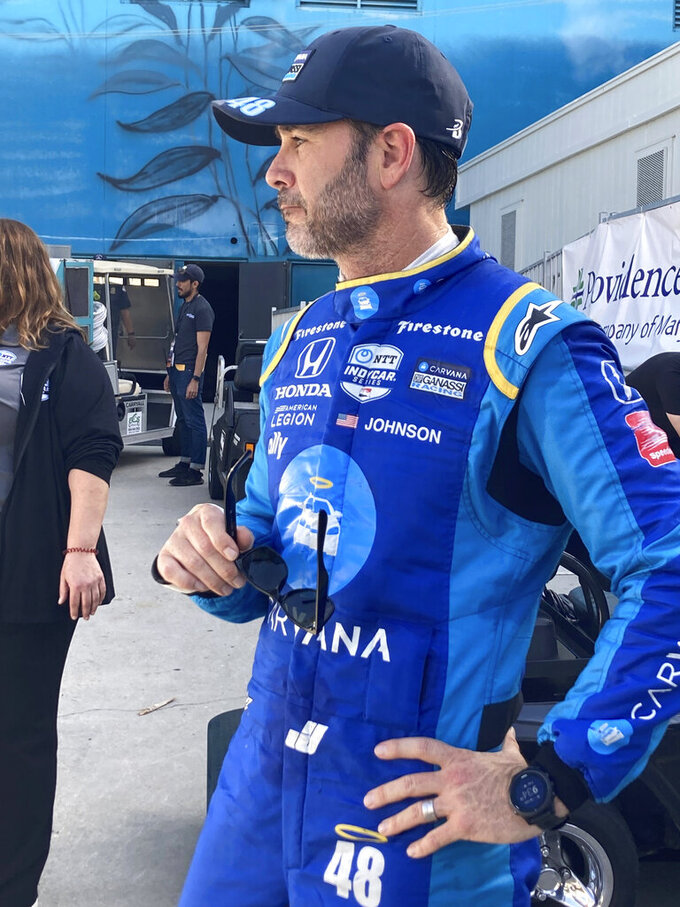 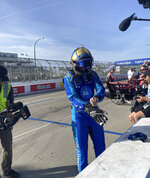 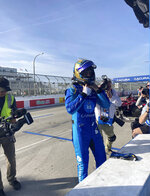 LONG BEACH, Calif. (AP) — Jimmie Johnson pulled one glove over the carbon fiber splint built specifically for his broken right hand. A piece of tape around two fingers outside of the glove was to prevent him from using his pinky — the digit closest to the fracture — as he drove his car around the downtown streets of Long Beach.

But what was supposed to be a Saturday morning test to determine Johnson's fitness a day after he was injured ended in another crash, another trip to the medical center and another set of X-rays.

“I had no pain on track, I felt great, just trying to go too fast into Turn 1 and locked the tires and got wide,” Johnson said outside the medical center. “I'm more disappointed in myself making the mistake and tearing up the car again. But from an injury standpoint, I feel really good.”

Johnson said he's good to go for Sunday at Long Beach, the IndyCar stop considered his home race. He grew up two hours away in El Cajon, so Long Beach was an annual childhood family trip, and Johnson rented a suite for 40 friends to watch him make his second career IndyCar start at Long Beach.

It's been a whirlwind weekend, though, for Johnson. He arrived in Long Beach coming off an IndyCar career-best sixth-place finish in his oval debut at Texas Motor Speedway — a performance that suddenly vaulted the seven-time NASCAR champion into the Indianapolis 500 contender conversation.

Johnson himself was among those hyped for his Indy 500 debut in Friday morning comments; hours later, he crashed into a tire barrier and broke his hand. The injury was apparent immediately as Johnson's in-car camera showed him shaking his right hand.

But Johnson clarified Saturday he did remove his hands from the steering wheel but did not pull them back far enough to avoid injury.

“I let go, I didn't get them far enough out of the way,” Johnson said. “But I let go and then with the impact, I guess my hands moved into the pathway of the wheel spinning and the bottom of the wheel caught it.”

The X-rays taken Friday showed the break, and his Chip Ganassi Racing team was tasked with building a splint IndyCar would approve for use in the car. The small black piece was wrapped in tape alongside the ridge of his right hand and had to be approved by IndyCar safety pioneer Dr. Terry Trammell.

It made for several tense hours as CGR and Johnson frantically worked to get him back in the car by Saturday morning. Ganassi sports car driver Sebastien Bourdais, a four-time IndyCar champion, would likely be Johnson’s replacement if he can’t race Sunday.

“We went through all the right steps and then on-track, it just faded away in my mind and I was just driving laps,” said Johnson, who arrived at the track at 6 a.m. Saturday to acclimate to the splint.

“Dr. Trammell is amazing. He knew exactly what to build, how to build it and where it needed to be positioned. Turns out, the man knows what he's doing.”

The X-ray on Saturday showed that the break had aligned overnight, and aside from some repairs to his No. 48 and Johnson forgiving himself for his second crash, he was ready to get back in the car.

“I’m just upset with myself. I know where I need to get better in these cars and how to attack, and that’s in the braking zones and releasing the brakes,” he said. "I had a personal best lap the lap before and I was in that rhythm of releasing the brake and allowing the car to roll quicker at the apex.

“And when I did, I lost the back and had to catch it and ran into the tires. I hate making mistakes, and I’ve made two now (at Long Beach).