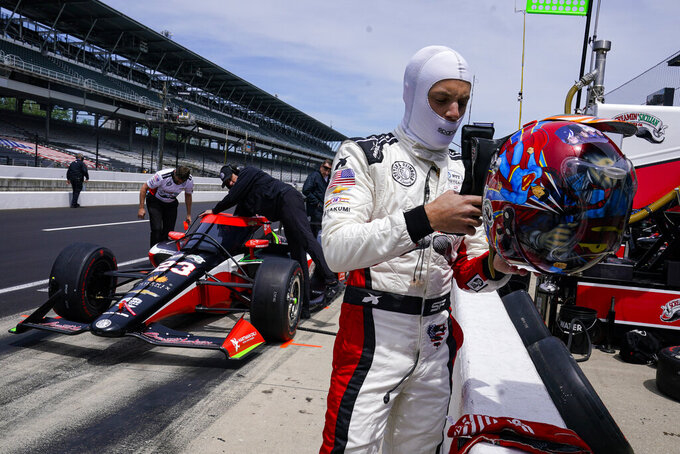 Santino Ferrucci prepares to drive before the start of practice for the Indianapolis 500 auto race at Indianapolis Motor Speedway in Indianapolis, Monday, May 23, 2022. (AP Photo/Michael Conroy)

DETROIT (AP) — Callum Illot will miss the Detroit Grand Prix because of a broken hand suffered in a crash during the Indianapolis 500. Juncos Hollinger Racing replaced him with Santino Ferrucci to race in Detroit this weekend.

Illot was an early crash at Indy and finished 32nd; Ferrucci was 10th on Sunday.

Illot crashed 68 laps into the Indy 500 and was wearing a brace on his right hand when he exited the care center following Sunday's initial evaluation. The British driver posted a picture on social media of the swollen, bruised hand before Monday's awards ceremony and was not cleared Wednesday to race at Detroit for JHR.

“I am devastated not to be racing,” said Ilott. “The damage to my hand was slightly worse than when first looked at. They suggested that the long-term healing was the top priority, and any damage that could be done in the short term by racing would be a longer-term problem.”

JHR chose Ferrucci, the young American who always delivers at Indianapolis but has struggled to land a full-time IndyCar deal.

He raced a partial schedule last season for Rahal Letterman Lanigan that included an eventful doubleheader in Detroit; Ferrucci finished sixth in the first race, then wrecked in qualifying for the second race. Driving a car made up of various RLL parts, Ferrucci finished 10th.

“Although I am happy to be back in the car, it’s unfortunate for Callum. I hope his hand heals really quickly and he is back on track soon,” said Ferrucci. “I’m just here to help with the team and see if we can get them a really good result and bring in some different knowledge from my experience in Detroit."