'I would have died' fumes Gasly after avoiding hitting crane 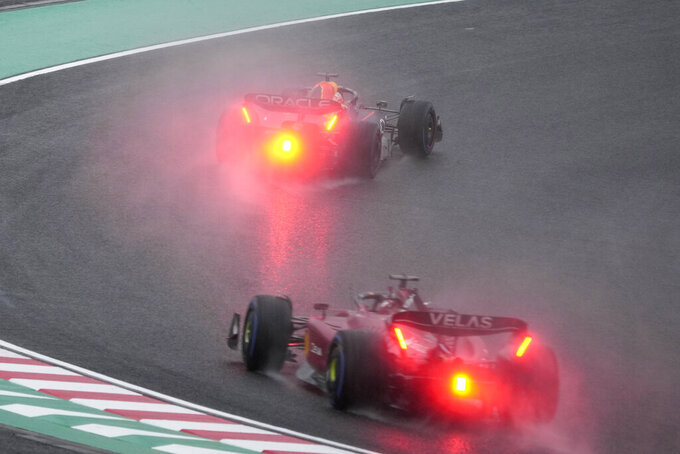 SUZUKA, Japan (AP) — An emotional Pierre Gasly said he feared for his life at the start of the Japanese Grand Prix when he narrowly avoided crashing into a crane on the same race track where countryman Jules Bianchi was killed in a similar incident.

The crane, or tractor as the drivers called it, was deployed Sunday when cars began sliding off course at the start of the rain-soaked race. The recovery vehicle was on the Suzuka Circuit to collect Carlos Sainz Jr.’s car after Sainz had gone off course in the wet conditions.

Although other drivers passed by the crane at slow speed, Gasly had started the race from the pit lane and was rushing to catch the pack in poor visibility when he came upon the safety crew. He sped past the crane and safety worker who was standing on the track.

The FIA after the race penalized Gasly for not slowing under red flag conditions, but the Frenchman was furious.

“What is this tractor on track?” Gasly screamed on his team radio. “I passed next to it. This is unacceptable. Remember what happened. Can’t believe this! We don’t want to see ever, a crane on the track.”

Bianchi in 2014 lost control of his car in wet conditions on the same track and collided with a recovery vehicle. He remained comatose with a head injury for nine months before he died at age 25. Bianchi’s death was the first from an on-track incident in F1 since Ayrton Senna’s fatal accident in 1994.

“We lost Jules already. We all lost an amazing guy, an amazing driver, for the reasons that we know. Eight years ago, on the same track, in the same conditions, with a crane," Gasly fumed after the race. "How? How today can we see a crane, not only in the gravel, on a race track, while we are still on the track? I don’t understand that.

“Obviously I got scared. Obviously if I would have lost the car in a similar way Carlos lost it the lap before... I would have died, as simple as that.”

F1's governing body penalized Gasly with a 20-second time penalty and two penalty points, but the FIA said it would also investigate the circumstances that led to the crane being on the course.

“It’s disrespectful to Jules, disrespectful to his family. All of us are risking our lives out there. We are doing the best job in the world but what we are asking is to at least keep us safe, it’s already dangerous enough," Gasly raged. "We could have waited one more minute to get back in the pit lane and then put the tractors on track. I’m just extremely grateful that I’m here and tonight I’m going to call my family and all my loved ones and the outcome is what it is.

"I passed two meters from that crane, and if I was two meters to the left I would have been dead.”

Bianchi’s father, Phillippe, posted on Instagram during the race there was “no respect for the life of the driver, no respect for Jules’ memory.”

The fury was shared across the F1 paddock.

“That’s the lowest point we’ve seen in the sport for years,” said driver Sergio Perez. “What happened today just makes me so angry. I just hope ever in the sport we never get to see this situation ever again. We saw what happened here a few years ago with our friend Jules and absolutely I don’t care about what was the reason for that. It should never happen again, ever in any category.”

Red Bull boss Christian Horner demanded a full investigation “into why there was a recovery vehicle on the circuit. Checo reported it to us and of course in those horrendous conditions when visibility is zero, it’s extremely dangerous.

“I still don’t know why we keep in these conditions risking having a tractor on track because it’s worthless anyways," Horner added. "You are going to red flag it anyway, so why risk it?”

McLaren driver Lando Norris wrote on Twitter: “How’s this happened!? We lost a life in this situation years ago. We risk our lives, especially in conditions like this. We wanna race. But this… Unacceptable.”

Gasly on Saturday was named Fernado Alonso's replacement next year at Alpine, in what should have been a celebratory weekend for the 26-year-old. Instead, the entire race was troubled from start to finish, when Max Verstappen was unaware he had won his second consecutive world title until well after his victory in the shortened race.