Herta unsure if IndyCar farewell and move to F1 are imminent 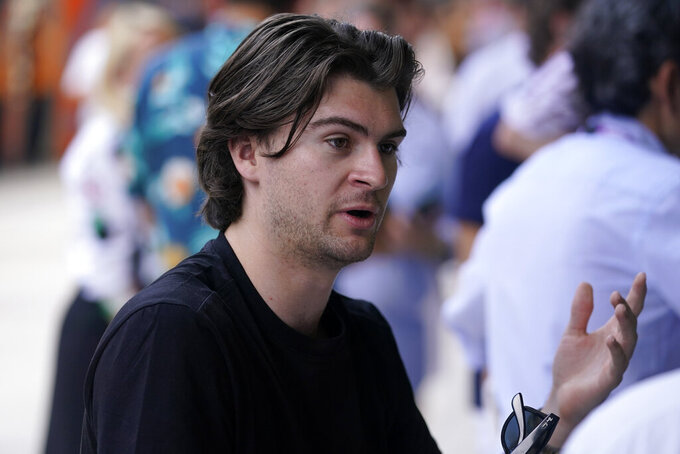 FILE - IndyCar driver Colton Herta speaks to a guest ahead of the Formula One Miami Grand Prix auto race at the Miami International Autodrome, Sunday, May 8, 2022, in Miami Gardens, Fla. Herta wants at least one more week to himself before he will begin to contemplate his 2023 plans. (AP Photo/Darron Cummings, File)

MONTEREY, Calif. (AP) — Colton Herta insists he has no deal to race in Formula One next season, is surprised at the sudden interest from AlphaTauri and doesn't really want an exemption to receive the Super License required to compete in the global series.

Is Sunday his final IndyCar race? Herta had no idea on Friday.

He heads into the IndyCar season finale at Laguna Seca Raceway as the two-time defending race winner. Herta is not eligible to win the championship — five drivers remain mathematically eligible in the closest title fight since 2003 — but he's the heavy favorite to win on the road course.

Herta won from the pole in his only two starts, in 2019 and 2021, and led all but 11 of the 185 combined laps. He could very well drive away from his IndyCar career with a victory and the 22-year-old Californian could be the first American on the F1 grid since Alexander Rossi in 2015.

But he refuses to give much thought to what happens after Sunday, or if he'll be back in 2023 as an Andretti Autosport driver.

He's left all contract negotiations to his father, Bryan, the former IndyCar driver who manages his career. Herta told his dad he doesn't want the distraction of future planning until after the IndyCar season has ended, and so his name being at the top of the F1 rumor mill came as a bit of a shock.

Helmut Marko, an adviser for Red Bull, said last week that a complicated deal had been reached to obtain Herta for next season at AlphaTauri, but it's contingent on him receiving a Super License. Herta is expected to fall eight points short of the 40 required to race in F1, and Marko indicated a decision from F1's governing body could come as early as this weekend in Monza, Italy.

He figures it's based on the July test Herta did for McLaren in Portugal, which was apparently impressive: “I think I did a good job then and people talk,” he said.

But he said Marko's declaration that a deal was done was news to him — “I haven’t signed anything” — and Andretti Autosports holds his IndyCar rights through 2023. McLaren has a testing contract with Herta through 2024 but does not have an open F1 seat.

And of course, everything depends on the FIA's ruling. Drivers need to accumulate 40 points to obtain a Super License based on their best three performances over the previous four seasons.

Herta is expected to have just 32 points ahead of 2023, and although he can gain points by participating in F1 practice sessions, he doesn’t currently have any sessions scheduled.

The Super License system was put in place so that drivers use F1's ladder system to reach the top series and young drivers can't skyrocket to the top, as Max Verstappen did when he was just 17 in his first grand prix.

But the FIA does not govern many United States-based motorsports series, IndyCar included, and the value it places on America's top open-wheel series hinders driver advancement. IndyCar falls somewhere in the rankings between F2 and F3, both junior categories that are often field-filled by wealthy ride-buyers.

“I can understand their side of the argument. They want guys to go over there and race through the ladder series. So it makes sense,” Herta said. “But at the same aspect, it seems a little bit disrespectful to IndyCar to have that few points.”

“And if they can’t recognize that and understand the deficiencies, then it’s even more laughable to me,” Newgarden said. “It’s not my decision, not my system, but it doesn’t take a rocket scientist to understand it.”

Ilott, who was a member of the Ferrari Driver Academy, said he framed his Super License. “It's the most expensive license in the world, of course I framed it,” he said. Lungaard said the FIA twice declined his application for a Super License.

Ilott, Grosjean and Ericsson have made strong cases for Herta while arguing the FIA simply shorts IndyCar.

“I think the way IndyCar is valued in the F1 world is pretty ridiculous,” Ericsson said. “It's the second-best — at least the second-best — championship in the world and even better in F1 in many way because of the competitiveness across the field. To value IndyCar between F2 and F3, where it is kids racing, good kids and some rich kids, and IndyCar is ranked between them? That is just ridiculous.”

How it gets handled for Herta remains to be seen, but the American would prefer a fair resolution and not an FIA exemption.

“I’m not sure that’s really the way I like to do it," Herta said of an exemption. "But you know, I guess you have to take the opportunity when you can. I would rather it not be this way.”